Setting the stage for Tops in Blue 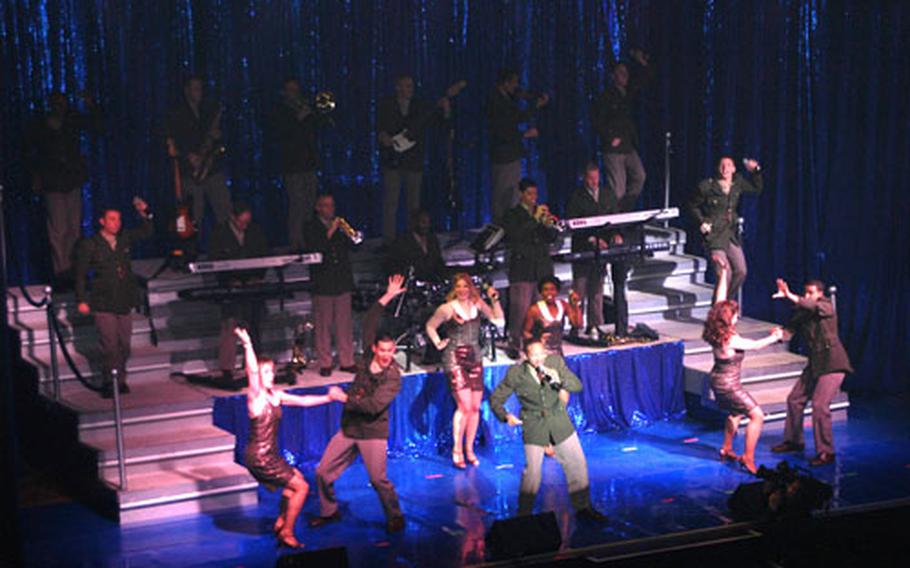 Members of Tops in Blue perform at a show at Yokota Air Base, Japan, on Thursday. (Bryce S. Dubee / S&S)

Members of Tops in Blue perform at a show at Yokota Air Base, Japan, on Thursday. (Bryce S. Dubee / S&S) 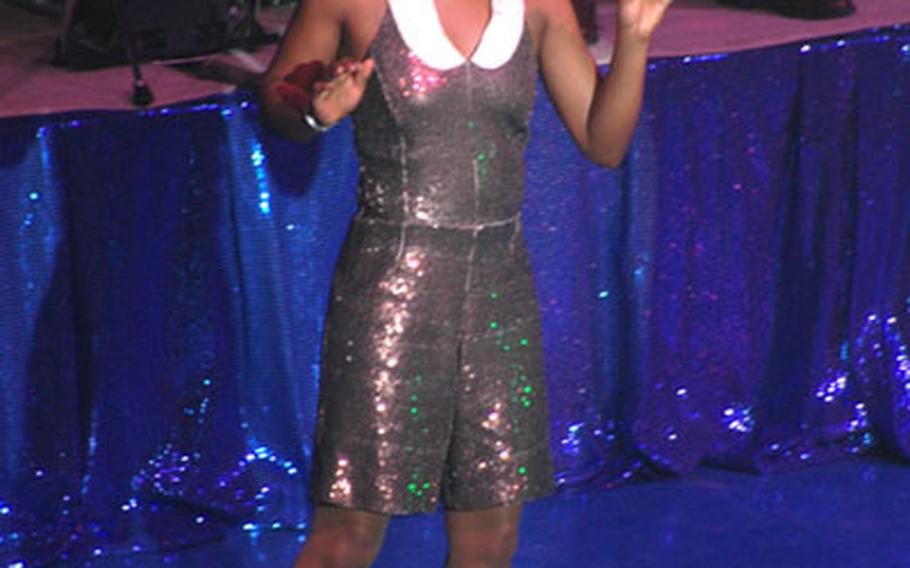 A member of Tops in Blue performs a solo number during a show at Yokota Air Base, Japan, on Thursday. (Bryce S. Dubee / S&S) 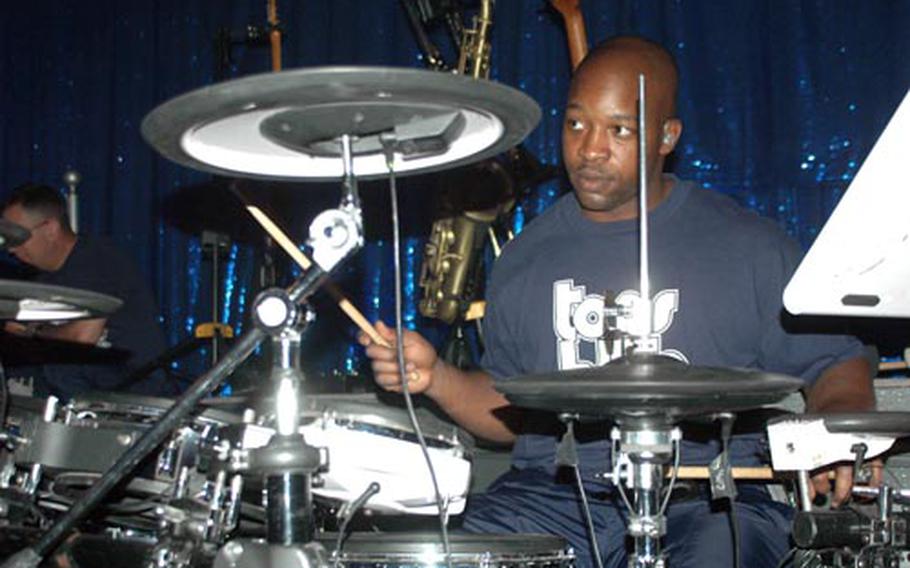 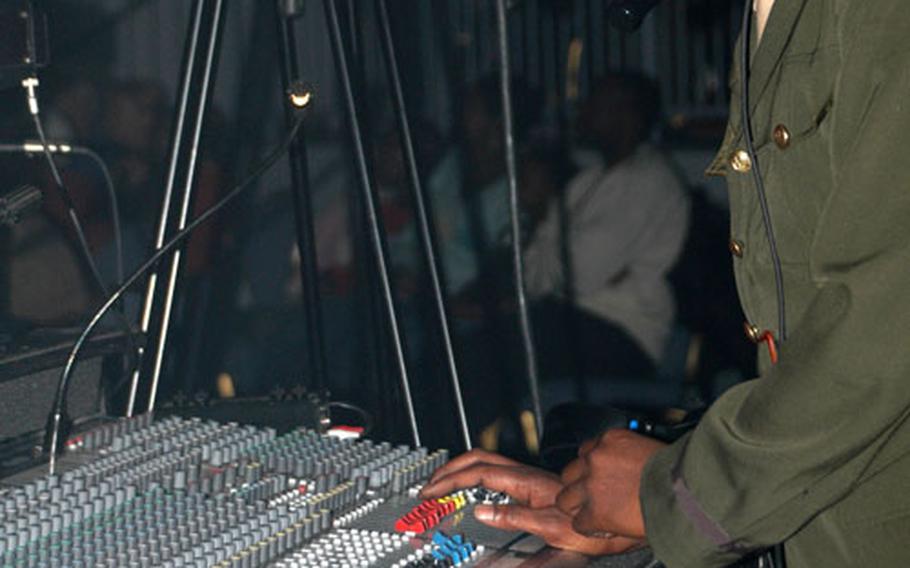 Tech. Sgt. Otis Samuels, the audio director for Tops in Blue, works the sound board Thursday during a show at Yokota Air Base, Japan. (Bryce S. Dubee / S&S) 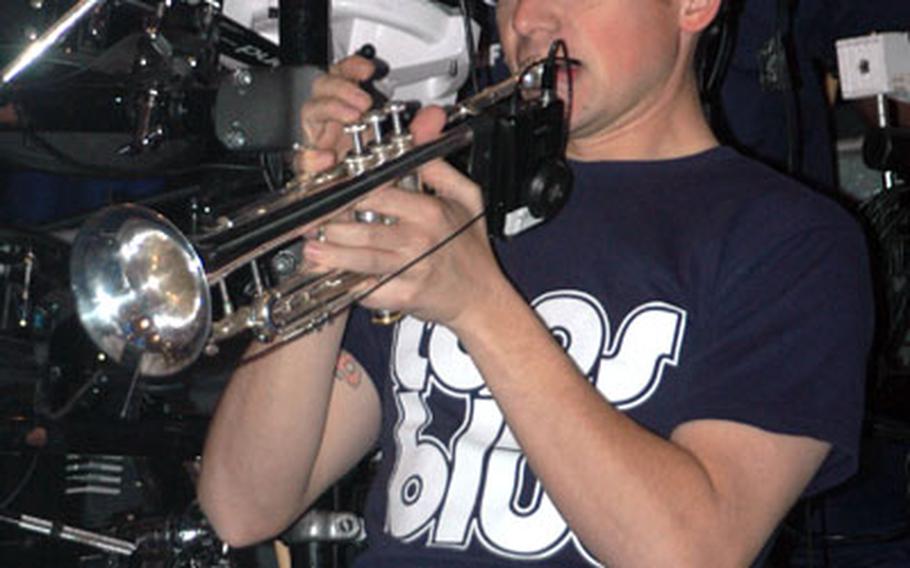 MISAWA AIR BASE, Japan - Making sure Tops In Blue goes off without a hitch at 110 locations worldwide doesn&#8217;t rest solely on the shoulders of more than two dozen cast and crew members.

The military bases that host the U.S. Air Force&#8217;s expeditionary entertainers rely on a small army of servicemembers and volunteers to pound nails, set up chairs, run generators, send invitations, and shuttle and feed the traveling troupe.

At Misawa, planning for Tops In Blue began in October and pulled in about 50 people from across the base who are working extra hours gearing up for Saturday night&#8217;s show, base officials said.

&#8220;The pressure is on the last day, just trying to get everything done,&#8221; said Master Sgt. Emilio Hernandez, a superintendent with the 35th Civil Engineer Squadron.

Civil engineers are to set up generators for the show and will build a stage on three, 40-foot flatbed trailers, using plywood, carpeting and skirting. They&#8217;ll also build two speaker platforms.

Hernandez, however, wasn&#8217;t sweating it too much, even though a plane still sat in the hangar Thursday.

The base-wide preparations are being coordinated by the 35th Services Squadron and the Mokuteki Community Center, which rely on directions Tops In Blue sends in advance. The manual outlines the group&#8217;s needs, from stage dimensions to the number of backstage volunteers.

While civil engineers hammer away on Friday, other personnel will prepare to meet Tops In Blue members, who were scheduled to arrive Friday afternoon from Yokota Air Base near Tokyo.

Transportation is needed to shuttle the cast and crew between lodging, meals and the hangar, which this year comes courtesy of the 35th Logistics Readiness Squadron&#8217;s vehicle operations flight. The flight also is moving the show&#8217;s cargo, providing forklift operators and drivers, according to Tech. Sgt. Troy Jones, vehicle operations flight chief dispatcher.

The 28 members of Tops In Blue are a mix of performers and technicians, who also are trained to assemble their equipment in hard hats before a show and break it down immediately afterward, often while still in stage makeup.

They arrived at Yokota on Christmas Eve with 60,000 pounds of gear, performing at the Taiyo Recreation Center on Wednesday and Thursday nights.

&#8220;The cast and crew are the roadies,&#8221; said Capt. Alex Ruiz, the Tops In Blue tour director, adding that it takes between three and four hours to set up or tear down the whole set.

But the time constraints and grunt work are just a small part of the Tops In Blue operation, said Staff Sgt. Ryan Soens, the staging and technical director, who normally works as a civil engineer at Osan Air Base, South Korea.

&#8220;The show is what it is all about,&#8221; Soens said, and knowing they were able to give the audience overseas a little taste of home.

Airmen at Misawa expect to work long after the curtain closes on Saturday night&#8217;s show, one of 160 on the 2007 tour. Helping secure more than 11 pallets of stage gear and baggage for military air travel falls on 35th LRS air transportation troops, said Tech. Sgt. Derrick Evans, one of two air transport specialists at Misawa.

Evans plans to enjoy Saturday night&#8217;s 7 p.m. performance, a Broadway-style mix of music, lights, dance and historical video footage highlighting 60 years of Air Force history. But Evans won&#8217;t relax until the Tops In Blue crew is on the plane Sunday to Kadena Air Base on Okinawa, where three shows are scheduled in two days.

Stars and Stripes reporter Bryce Dubee contributed to this report.