Setting boundaries for bullies at school 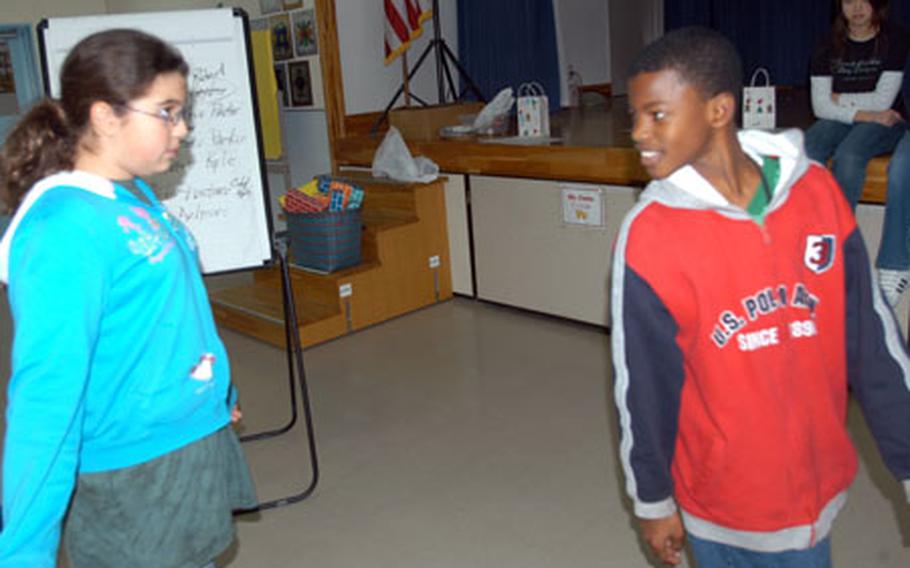 A list of the steps involved to empower victims of incessant teasing or bullying was on display during recent practice for a sixth-grade anti-bullying skit at Sollars Elementary School, Misawa Air Base, Japan. (Jennifer H. Svan / S&S)

MISAWA AIR BASE, Japan &#8212; Sixth-grader Stephanie Steele has seen classmates at Sollars Elementary School picked on for how they walk, how they talk, what they wear, even for their last name. She&#8217;s been made fun of before, she said, for her big puffy jacket that looks like a marshmallow.

A new program for sixth-graders at Sollars is teaching students about those boundaries and how to fight back against intimidation and harassment. If bullying or teasing escalates after the child has made it clear he or she wants it to stop, the student can ask a teacher or counselor for mediation. A written contract is signed by the student and the offender, with copies sent home to parents of both. If the contract is broken, the principal gets involved and consequences may follow.

Sollars is just the latest in Department of Defense Dependents Schools-Pacific to tackle the age-old &#8220;playground&#8221; bully.

DODDS-Pacific administrators say they don&#8217;t believe bullying is widespread in any of their schools but it&#8217;s an issue that can&#8217;t be ignored, especially in light of the wave of school shootings in the States in recent years.

&#8220;The ramifications are far-reaching,&#8221; said Peter Grenier, assistant superintendent of DODDS-Pacific&#8217;s Korea District schools. &#8220;Students that have been picked on or harassed for years in elementary school can become totally unglued as a high school student and retaliate (with) very violent means. The more we can do to prevent this from happening, the better off we&#8217;ll be.&#8221;

All Defense Department schools in the Pacific incorporate anti-bullying messages into their curriculum at all grade levels. In 2001, schools received materials and training in violence prevention and character education, according to Charles Steitz, a spokesman for DODDS-Pacific and Department of Defense Domestic Elementary and Secondary Schools-Guam.

Grenier said it boils down to providing a safe learning environment.

Children who are bullied often experience depression and low self-esteem, according to the KidsHealth Web site, while those who bully may as teens and adults engage in more destructive, anti-social behaviors.

Bullying is about power and can happen in any grade, said Deb Young, a counselor at Misawa&#8217;s Cummings Elementary School.

Bullying can take many forms, she said, including hitting, pushing, blackmailing, spreading rumors, teasing and name-calling.

Student polls taken at Cummings indicate bullying typically takes place on the playground or when walking to or from school, where there&#8217;s less adult supervision, Young said.

Bullying at Cummings is addressed in the classroom, in small groups, and schoolwide, she said.

Teasing can become more prevalent around puberty, Blake said, as kids &#8220;are trying to figure out who they are and who they want to become. If you tease someone else, it takes pressure off of you. Kids will tell me that if kids are laughing at someone else, they&#8217;re not laughing at you.&#8221;

Some STEPS to stop kids from teasing

Two sixth-graders confided in Sollars counselor Susan Blake that they were being picked on and asked what they could do about it. They and some other classmates devised STEPS and presented skits to the whole sixth-grade class before the holiday break last month to demonstrate strategies for dealing with repeated teasing.

STEPS stands for students, teachers, and parents stopping teasing and bullying. It teaches students to first tell the offender to stop in a confident and serious tone. If the teasing continues, the student warns, &#8220;I&#8217;m going to use my STEPS.&#8221;

The third time, the student can go to any adult to develop a written contract with the teaser to stop the behavior. A copy of the contract is sent home to each student&#8217;s parents. If the taunting continues, the culprit is referred to the principal.

&#8220;The consequences at this point are likely to include suspension either in or out of school,&#8221; Sollars Principal Jim Journey wrote in a letter that went to parents late last month.

Sixth-graders Melissa Albers and Miranda Schwartz said they once were hesitant to speak up about teasing or bullying out of fear it might escalate or rumors about them would be spread.