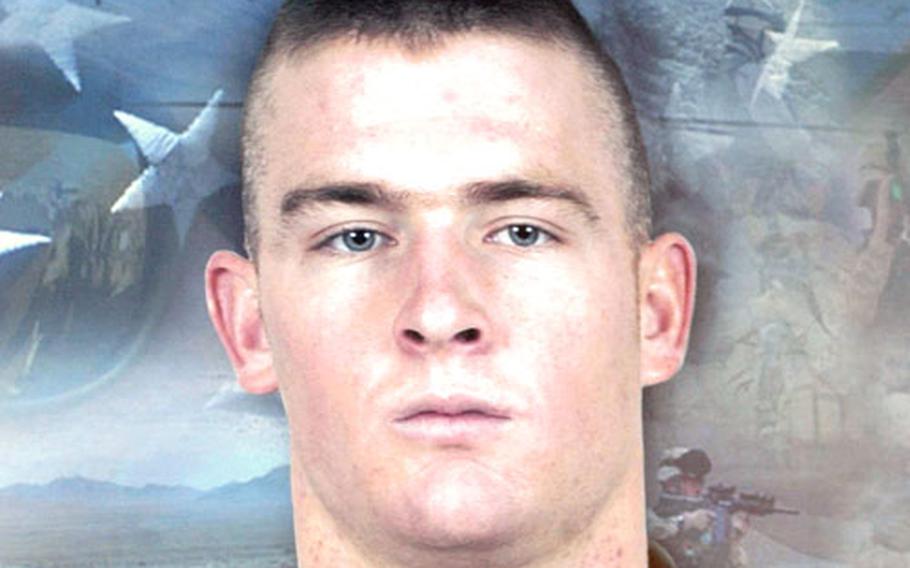 Cpl. Matthew Steyart, 21, aspired to attend Ranger school. He was killed by a roadside bomb Nov. 22 in Afghanistan. ()

VICENZA, Italy &#8212; The people gathered in the chapel at Caserma Ederle were told to think of Cpl. Matthew Steyart fishing from a small boat on a cold mountain lake &#8212; maybe something similar to the one on the cover of the program for Steyart&#8217;s memorial service.

The American military community gathered Tuesday to mourn the 17th soldier from the Southern European Task Force (Airborne) killed in Afghanistan this year.

&#8220;If you are like me, after each memorial service, you pray that this community has seen its last fallen soldier,&#8221; said Capt. John McDougall in the commander&#8217;s comment section of the service.

Steyart, 21, grew up around Mount Shasta in northern California and was an avid outdoorsman, McDougall said. He loved to hunt and fish with his father.

Staff Sgt. Joseph Pier said Steyart was performing as he always did: committed and with a positive attitude.

&#8220;He showed to his leaders that he had what it took to accomplish the mission in Afghanistan,&#8221; Pier said.

Steyart joined 1st Platoon, Company B, 1st Battalion, 508th Infantry Regiment shortly after the unit returned from a year&#8217;s service in Iraq. He distinguished himself at military training areas in Hohenfels and Grafenw&#246;hr in Germany, Pier said. He also helped his platoon win the first Red Devil Challenge, a battalion competition.

Pier said the platoon was taking the loss hard.

Steyart, who aspired to attend Ranger school after the unit returned to Vicenza, was always there for his platoon mates, Pier said.

Chaplain (Lt. Col.) Doug Hudson said Steyart went to Afghanistan carrying the same copy of the Scriptures that his grandfather had during World War II.

Steyart is being recommended for the Bronze Star Medal. He is survived by his mother, Nancy; sisters Denise Lloyd and Cathy Tuggle; and brother Robert.