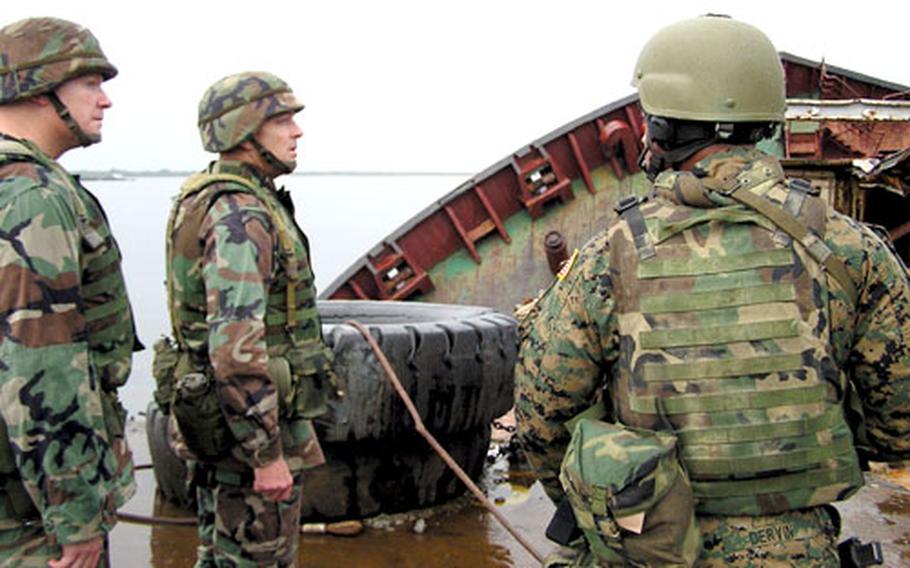 A majority of its fighting forces might still be in Iraq, but that hasn&#8217;t stopped the Southern European Task Force (Airborne) from taking charge of American efforts to bring peace to Liberia.

Maj. Gen. Thomas Turner, SETAF commander, is heading American efforts in the region from a Navy ship off the coast of the war-torn country.

Turner has a little more than two dozen members of SETAF with him among the roughly 4,000 American troops he is commanding in the region. More than 300 others in the command element are performing their duties while still in Vicenza, Italy.

&#8220;We have minimized the forward footprint as much as we can,&#8221; said Lt. Col. Tom Collins, the top public affairs officer for SETAF and now for Joint Task Force-Liberia, in a telephone interview from the amphibious assault ship USS Iwo Jima.

That&#8217;s partly because the United States is playing a support role to the military wing of the Economic Community of West Africa, which is supplying peacekeepers. Liberia has experienced a devastating civil war for more than a decade, with millions of people killed or displaced.

Nigerian Brig. Gen. Festus Okonkwo is leading the peacekeeping effort, and the force now is almost exclusively Nigerian. Collins said one battalion is on the ground and another is on its way.

U.S. forces, including special operations troops from Stuttgart, Germany, are in several surrounding countries, helping to assess the military capabilities of those who might send peacekeepers.

As for American forces, only about 200 are in Liberia. A beefed up team of Marines is providing security at the U.S. Embassy, a small force is serving as a quick-reaction team and a handful act as advisers. Some Navy and Marine helicopters are still flying over the country. A small group of American personnel is at Roberts International Airport, about 40 miles northeast of the Liberian capital of Monrovia.

That has allowed U.N. flights bringing aid to land as well as troop transport planes for the Nigerians.

Though the U.S. presence in Liberia is small, its contribution of troops to the region is considerably larger. The USS Iwo Jima, the landing dock ship USS Carter Hall and the amphibious transport dock USS Nashville, with more than 2,000 Marines on board, are waiting off the coast to assist as necessary. Hundreds of Air Force personnel from the 3rd Air Force &#8212; gathered from several bases in Europe &#8212; are stationed in neighboring countries to provide fixed-wing aircraft support.

All told, more than 300 servicemembers from Europe from as far north as NAS Keflavik in Iceland to as far south as Naval Station Rota in Spain, have served in or around Liberia.

The first elements of SETAF&#8217;s command element arrived in late July and are expected to stay until the fall. That will mean they&#8217;re back at home months before the 173rd Airborne Brigade, which makes up the majority of SETAF&#8217;s fighting strength, is back from Iraq.

By then, the command hopes to have a peacekeeping force from several countries in place with no warring factions to worry about.