SETAF furls its colors as deployment draws near 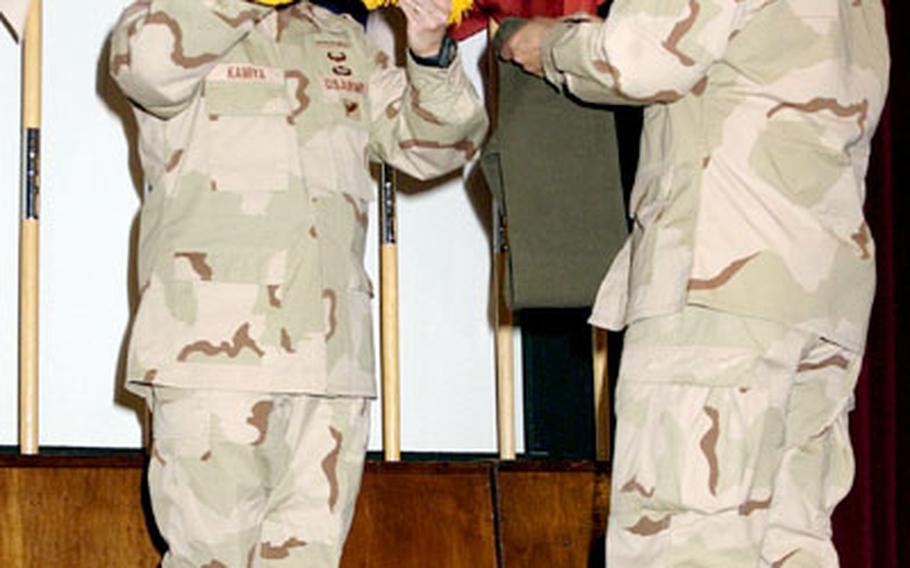 &#8220;It&#8217;s hard to believe a year of training has come to an end and we are on the eve of deployment,&#8221; Maj. Gen. Jason Kamiya, commander of the Southern European Task Force (Airborne), told hundreds of Americans and Italians gathered in the base theater Wednesday.

Kamiya and the SETAF headquarters staff are heading to Afghanistan to begin what is expected to be a yearlong deployment leading U.S. peacekeeping efforts. The SETAF colors were furled Wednesday in a ceremony held indoors because of the weather.

&#8220;Absolutely,&#8221; said Savosa, adding that SETAF and its major subordinate unit, the 173rd Airborne Brigade, have known about the deployment for almost a year.

SETAF will take over for the Hawaii-based 25th Infantry Division. Kamiya said it would be the first time a nondivision-size headquarters staff has been assigned to take over a mission run by a larger unit. He and Savosa credited the U.S. Army Europe headquarters staff for contributing support and personnel to make it happen.

Of course, SETAF will be far from alone in country. The 1st Brigade of the 82nd Airborne Division, elements from the Giebelstadt, Germany-based 12th Aviation Brigade and the Illesheim, Germany-based 11th Aviation Regiment and other reserve and active-duty units from the States and the Pacific theater will soon be serving in Afghanistan.

The NATO-led International Security Assistance Force is also in country and is expected to take a greater role in peacekeeping efforts during SETAF&#8217;s year in Afghanistan. An Italian commander is scheduled to take over ISAF from a Turkish counterpart during that span.

Kamiya told Italian journalists after the ceremony that he expects to have a good relationship with the Italian commander &#8220;given the fact that we both come from the same host nation.&#8221;

Advance elements from Joint Task Force-76 are already in Afghanistan and the SETAF headquarters is expected to join them shortly. Some units, both on base and elsewhere, won&#8217;t actually be in country until after SETAF takes command on March 15.

Kamiya said his thoughts and emotions about the deployment probably echo that of most of his soldiers.

He cited apprehension, confidence and excitement, before addressing anxiety.