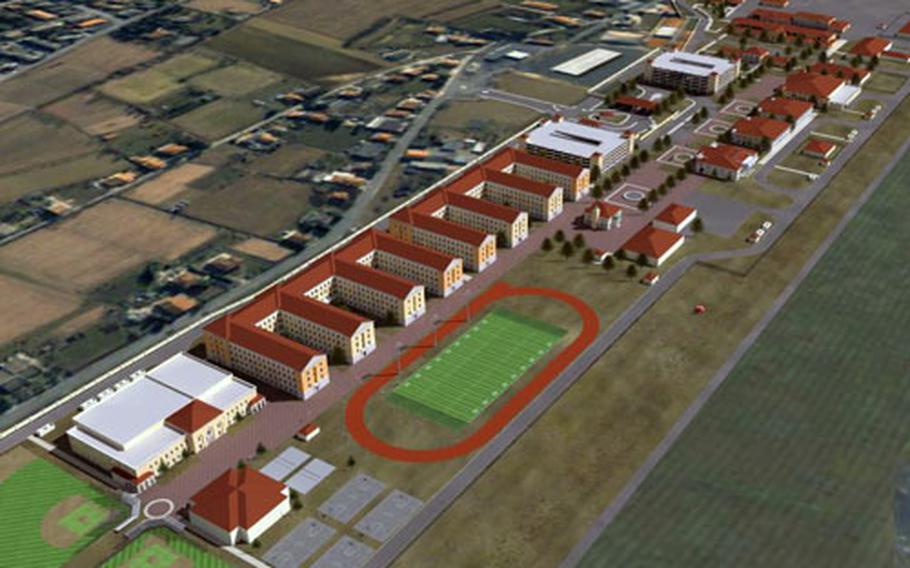 If the U.S. gets permission from the Italian government to use the Dal Molin airfield as a home for the 173rd Airborne Brigade, the facilities might look something like this artist’s rendering. The Americans say they won’t use the existing runway, at right, to deploy troops. (SETAF illustration)

If the U.S. gets permission from the Italian government to use the Dal Molin airfield as a home for the 173rd Airborne Brigade, the facilities might look something like this artist’s rendering. The Americans say they won’t use the existing runway, at right, to deploy troops. (SETAF illustration) 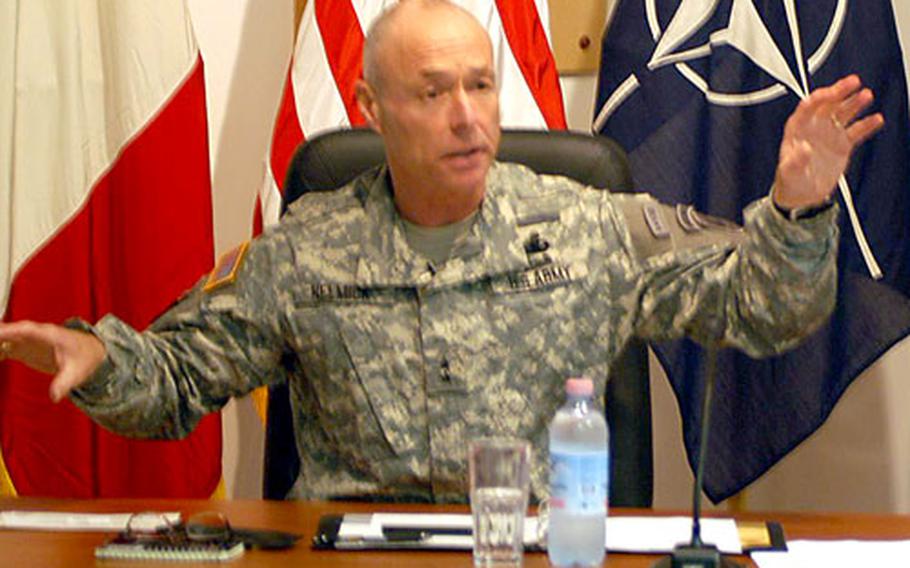 But the commander of the Southern European Task Force (Airborne) didn&#8217;t let that stop him from holding a press conference Monday to &#8220;dispel any misconceptions that people have about what we want to do with Dal Molin.&#8221;

&#8220;I just wanted to make sure we had the facts laid out before you,&#8221; Maj. Gen. Frank Helmick told Italian media members gathered at the Caserma Ederle&#8217;s Hall of Heroes.

He issued a list of facts about the U.S. proposal, which has been a topic of several articles recently in the Italian media. Helmick spent as much time talking about what the facility would not be used for as he did on what functions the U.S. does envision.

No tanks. No spy planes. No multiple missile launching systems. No use of the airfield to deploy troops. No takeover of Italian jurisdiction.

What was new? The confirmation that if the U.S. used the facility, the 173rd would be the one to move in, and a few drawings of what some facilities might look like.

The issue is a sensitive one to the American and Italian militaries and federal governments. Prime Minister Romano Prodi, elected by Italians to succeed Silvio Berlusconi in the spring, told members of parliament this summer his government planned to review the entire proposal.

The two countries have already spent more than two years negotiating on the issue and the Americans said they had a basic agreement in place in 2005.

Helmick presented a slide show of what the U.S. hopes is the timetable for Dal Molin. Construction would start in 2007 and finish in 2011. He showed economic projections that the U.S. military community would be injecting about 243 million euros annually starting in 2012 &#8212; up about 67 million euros from current estimates.

Asked about the ongoing talks and chances of the Italians deciding not to allow the U.S. to use the facility, Helmick said discussions are occurring above his level.

The 173rd, which is transforming into a brigade combat team, has two infantry battalions based in Vicenza. There is not enough room for more troops at Caserma Ederle, so four other battalions are based in Bamberg and Schweinfurt in Germany.

&#8220;Units at three different locations, two in Germany and one in Italy, is not the optimum situation for us,&#8221; Helmick said.

Asked what the U.S. might do if their request for the use of the airfield was denied &#8212; including the potential of moving all the troops to Germany &#8212; Helmick said &#8220;the national governments of both the United States and Italy will have a difficult decision to make.&#8221;