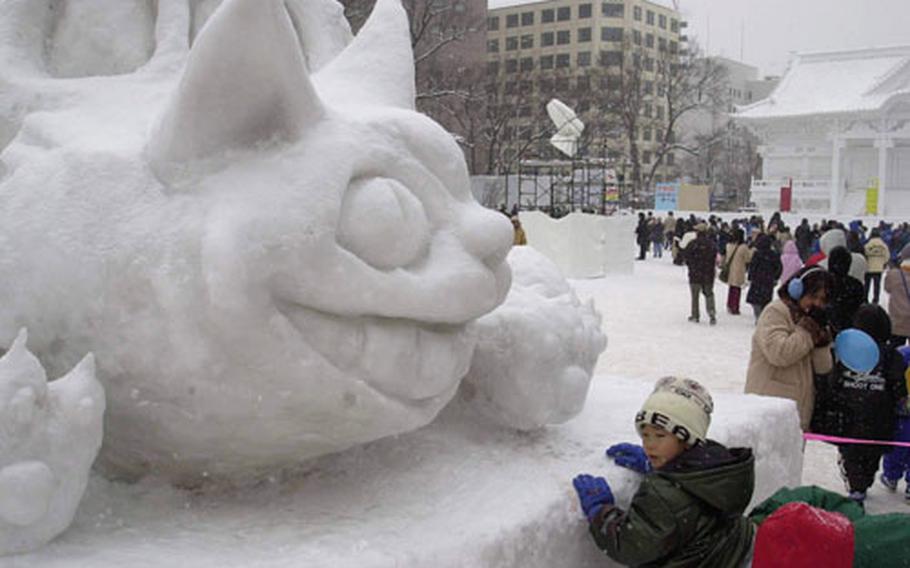 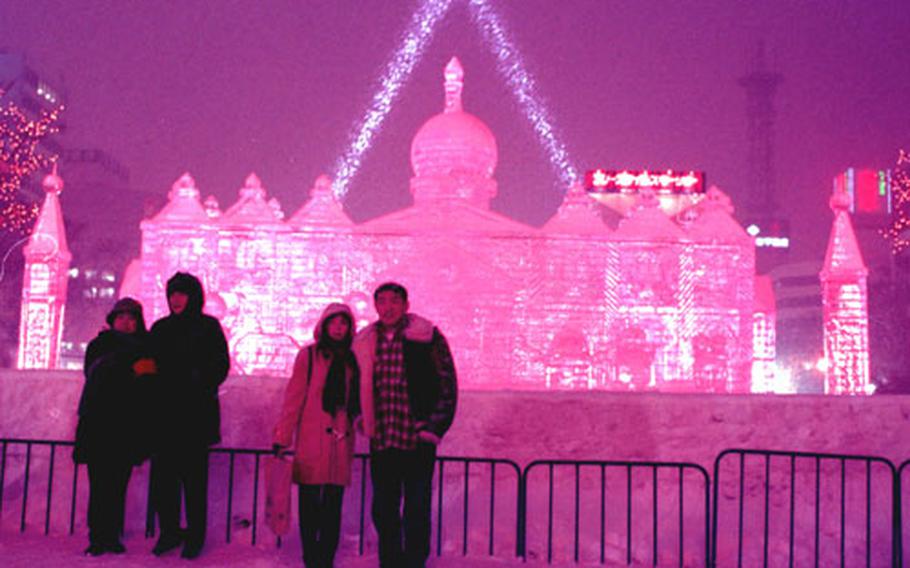 A European castle made entirely of ice shimmers in the night during the 1999 Sapporo Snow Festival. (Wayne Specht / S&S) 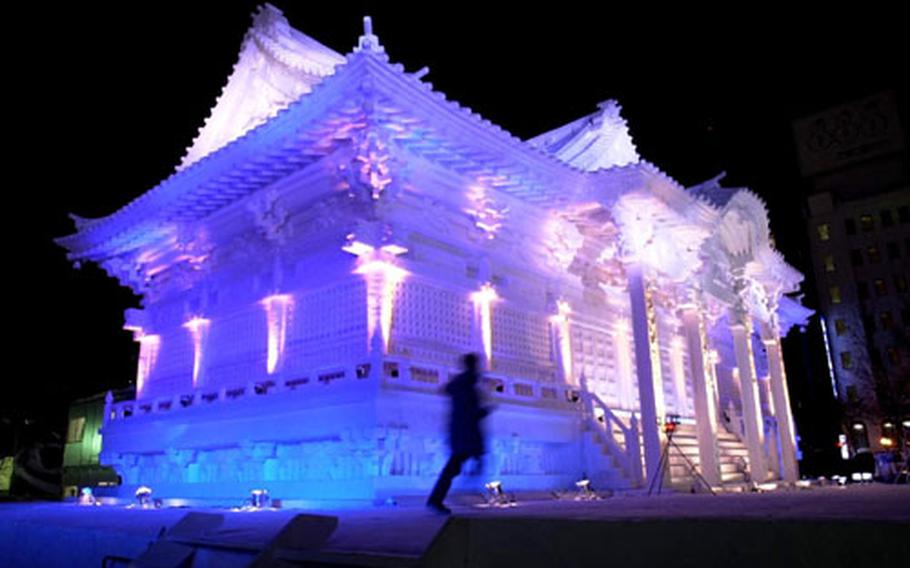 There&#8217;s no business like snow business &#8212; and no one knows that better than Sapporo city officials on Japan&#8217;s northernmost island of Hokkaido.

That&#8217;s the site of the 54th Sapporo Snow Festival, a Feb. 5-11 event expected to draw up to 2 million spectators and bolster the local economy.

In recent years, visitors have spent an average of $50 million on hotel accommodations and restaurant visits.

The 2003 festival theme is &#8220;A Pure White Dream.&#8221; To ensure that happens, troops with the Hokkaido-garrisoned Japanese Ground Self-Defense Force will be delivering 7,000 five-ton truckloads of snow from nearby mountain areas.

Among the larger volunteer-built snow sculptures is a replica of the British Museum, marking its 250th year.

Edo Castle, built in 1457 in Tokyo, will rise more than 75 feet skyward. The 150th anniversary of the arrival in Japan of Commodore Matthew C. Perry&#8217;s black-ship fleet is to be another large-scale sculpture.

Building the sculptures, a tourism promotion spokesman said, is to begin Jan. 30.

Twenty teams will take part in an international snow carving competition in Odori Park, where bands and singers are to perform daily.

A Department of Defense Dependents School team from Yokota Air Base, Japan, which has had a presence at the festival for the past 30 years, also is expected.

Opening ceremonies are set for Feb. 5, said Sapporo&#8217;s Tourism Promotion Division. The ceremonies will be at the Makiminato site on a Ground Self-Defense Force camp a few miles west of downtown Sapporo. It can be reached easily by subway.

Closing ceremonies are Feb. 11 at Odori Park in downtown Sapporo, the main venue.

Military travel offices at Camp Zama and Misawa Air Base, Japan, are offering travel packages to the festival.

Yokosuka ITT is offering a festival package for four days and three nights, Feb. 2-5. The package includes ground transportation from Yokosuka to Haneda Airport, airfare, ground transportation in Sapporo, hotel accommodations and admission to the festival. It also includes breakfast and a dinner at a local beer garden. The cost is 71,500 yen, or about $604. Call 243-6629 or 243-6952 for more information.

The ticket price includes bus transportation to and from Haneda Airport, round-trip airfare, two-nights lodging, one lunch, all you can eat and drink, mutton barbecue at the Sapporo beer garden, two breakfasts and a sightseeing bus tour.

Also offering Sapporo trips is Camp Zama&#8217;s International Tours and Tickets. However, that office is closed until Jan. 6, during the Japanese New Year holiday.

The event&#8217;s Web site &#8212; www.snowfes.com/english/index_e.html &#8212; has more information about the snow festival and accommodation recommendations.