Serving together a challenge for spouses deployed to Kuwait 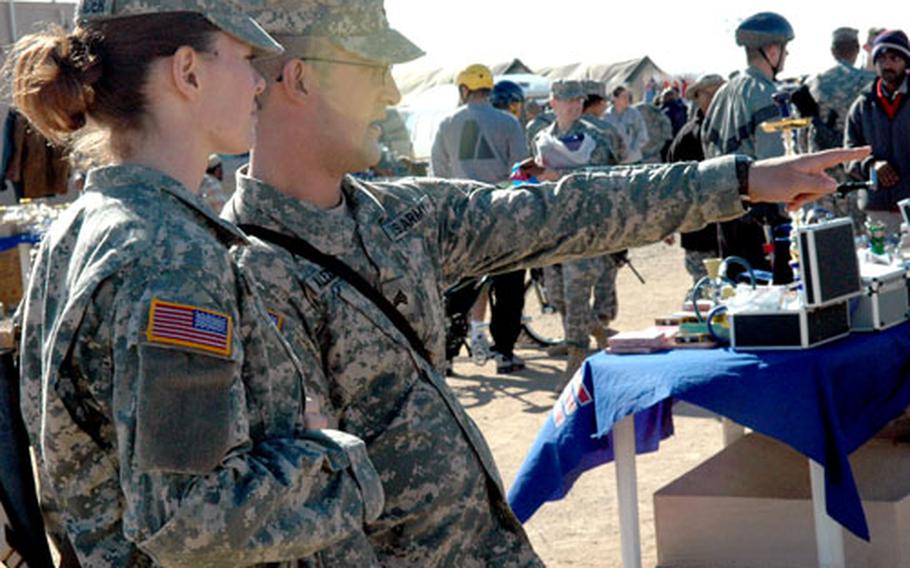 Ashley and Darold Alexander, with the 1st Armored Division’s 1st Brigade, spent Sunday shopping on the base as they prepare to go to Iraq. (Andrew Tilghman / S&S)

CAMP BEUHRING, Kuwait &#8212; Spc. Deadre Brandt considers herself lucky compared to many married soldiers deployed in the Middle East. Her husband, an infantryman, lives in a nearby tent on this desert training camp about 10 miles south of the Iraqi border.

But, she is quick to point out, married life for her and other couples serving together downrange has its own unique set of challenges.

Brandt is among the nearly 3,500 troops here with the Baumholder, Germany-based 1st Armored Division&#8217;s 2nd Brigade, who spent months training to go to Iraq but later learned they would stay in Kuwait and serve as a quick-reaction force in case of a crisis.

While many soldiers lament separation from families back home, dozens of couples like the Brandts are struggling to maintain their marriage under military rules. Primarily, of course, they point to the Army&#8217;s sweeping prohibition on sexual activity for soldiers on deployment, with no exceptions for married couples.

Additionally, however, many lower enlisted couples are not permitted to spend time alone together. That stems from the 2nd Brigade&#8217;s broader rule that requires all lower enlisted soldiers to have a noncommissioned officer escort before going anywhere beyond their barracks area other than the dining hall, known as the DFAC.

Pfc. Jennifer Trevino and her husband, Pfc. Ramon Trevino, are also in Kuwait.

Jennifer Trevino says they have been married more than four months but have spent only about 20 nights together as husband and wife.

Nevertheless, living in separate barracks is better than on separate continents.

Training schedules make it difficult to maintain daily contact, and couples can go days without seeing each other. Many say they spend their free time simply sitting on a bench near the barracks and chatting.

To some degree, the women understand the Army&#8217;s rules that bar any public display of affection between married couples.

&#8220;My husband&#8217;s best friend has a wife back in Germany, and we do everything we can not to make him feel uncomfortable. We know that might make him feel lonely,&#8221; said Pfc. Danielle Woline, 23, a petroleum supply specialist who has been married for two years.

Couples worry not only about their own safety here, but also that of their spouse. Some married soldiers react differently to the Army&#8217;s decision to keep the 2nd Brigade in Kuwait rather than send it to Iraq as initially planned.

In an environment where couples&#8217; traditional roles are suppressed, the married women here find small ways to show support.

Sgt. Shekura Gopie, an ammunitions specialist, and her husband are both noncommissioned officers, which gives them more freedom to see each other. But she said it&#8217;s tough not having a spouse back at home to take care of day-to-day matters such as bills, legal issues and other personal affairs.

Spc. Rebecca Tucker sees her husband once every three or four days. Nevertheless, that seems like more than she saw them at home when the two of them were both working long hours with free time that rarely overlapped.

Army regulations actually encourage some couples to get married. Darold and Ashley Alexander got married in November shortly before their deployment so the Army would have to treat them like family members.

The Alexanders are planning to move into northern Iraq with their brigade as early as next week.