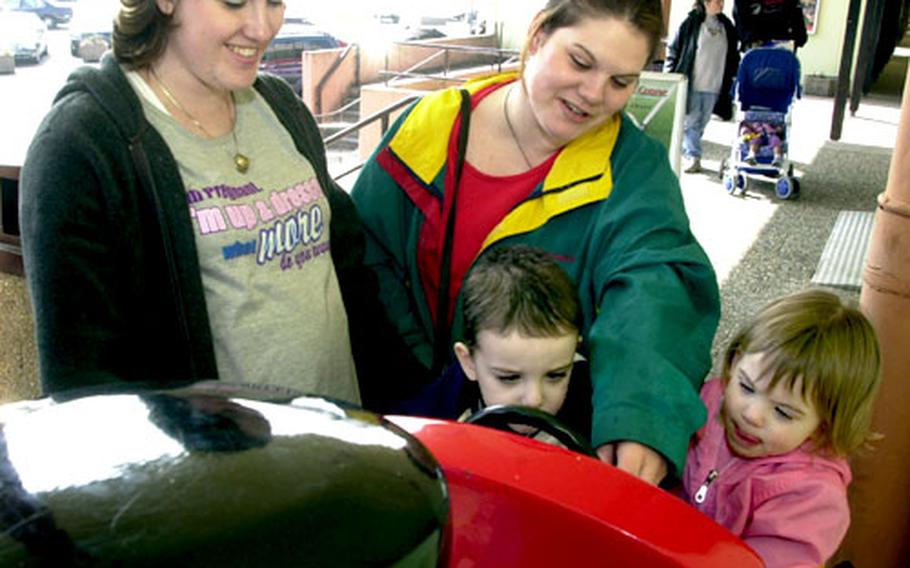 Crystal Stuart, left, and Sandy Hamblin say shopping is good therapy for when soldiers deploy. While organized travel and wives clubs are fine for some, the two women agreed that small children make play groups more practical. Close friends are essential during long separations, they said, as they watched Anthony Stuart, 3, and Emily Hamblin, 2, ride a toy train outside Baumholder’s Base Exchange on Thursday. (Terry Boyd / S&S)

BAUMHOLDER, Germany &#8212; War is coming to Baumholder, just as it has to dozens of U.S. military bases all over the world.

Even though Sandy Hamblin and Crystal Stuart were enjoying a sunny late-winter afternoon with their children at the post exchange, it wasn&#8217;t enough to take their minds off soon-to-deploy husbands.

Stuart said she most dreaded explaining to her 3-year-old son Matthew &#8220;why daddy&#8217;s gone.&#8221; Her second child will probably come after her husband, Cpl. Matthew Stuart, deploys to the Middle East with the 1st Armored Division.

But the joking masked anxiety over an uncertain future.

It doesn&#8217;t have to be like that, say service providers.

&#8220;They don&#8217;t have to tough it out,&#8221; said Bridget A. Sanders, Community Outreach/Mobilization and Deployment Readiness coordinator at Baumholder&#8217;s 222nd Support Battalion Army Community Services.

When soldiers deploy to war, community centers like hers may &#8212; at the behest of Base Support Battalion commanders &#8212; elevate to Soldier and Family Assistance Centers, extended-hour centers of activity, with other support organizations moving in, Sanders said.

Spouses can go there to get everything from emergency medical assistance to a volunteer position to a replacement for a lost identification card, she said.

Or they can can go just to talk or ask advice. Previous deployments for peacekeeping missions were different. This is war, she said, and many people don&#8217;t know what to expect.

Spouses who are considering leaving are missing out on an opportunity to make friends, said Debbie Thomas, human resources assistant for Non-Appropriated Funds civilian employees at Baumholder. &#8220;I think they should just stay,&#8221; she said.

When her husband, Sgt. David Thomas of the 2nd Battalion, 6th Infantry Regiment of the 1st AD, deployed to Kosovo in 2001, she worked hard to make a new group of friends.

Thomas said spouses &#8220;married the military&#8221; and its frequent deployments, and they owe it to soldiers to make the most of it.

Often the longer the separation lasts, the more difficult it becomes.

&#8220;I&#8217;ve had some calls from wives who haven&#8217;t received any mail from their husbands or haven&#8217;t heard from them, and they&#8217;re concerned about that,&#8221; said Lonnie Leatherbery, Family Readiness Group leader for the Headquarters Company of the 54th Engineer Battalion in Bamberg.

She and 1st Lt. Corey Genevicz, rear detachment commander, tell the spouses that &#8220;mail is really slow coming back [from the Persian Gulf], and for them not to worry,&#8221; Leatherbery said.

At Bamberg, where only 30 soldiers remain after the battalion deployed to the Middle East, Genevicz set up a hot line for family members.

The battalion also set up a crisis team that family members can call in emergencies.

The Fleet and Family Support Center at Naval Station Rota, Spain, has several programs to help family members cope. Two weeks ago, the center held a training session for caregivers, offering pointers on dealing with children whose mother or father is deployed.

The center also plans to meet with schoolteachers to discuss how to identify problems.

It&#8217;s important to help parents deal with their problems because a parent&#8217;s depression over a deployment can trickle down to children, said Gus Terlaje, the center&#8217;s director.

&#8220;A lot of times they get so down in the dumps and all they think about is worrying about that spouse [who] is deployed. We try to refocus that energy into the constructive activities or programs that we have.&#8221;

Even with distractions, such as good friends, informal playgroups and community safety nets, deployments are always difficult, said Baumholder&#8217;s Stuart.

Reporters Rick Emert in Bamberg, Germany, and Scott Schonauer in Rota, Spain, contributed to this report.

Each service has a family support function. Community members should call local centers &#8212; or go on-line &#8212; to find out what&#8217;s available at the base or post.

No matter if it&#8217;s Army, Air Force, Navy or Marines, family support operations offer services ranging from travel opportunities to emergency aid to financial advice. And many increase hours and services in wartime.

To find out what&#8217;s available at your base, check the following Web sites: