Services get sex assault advocate offices up and running 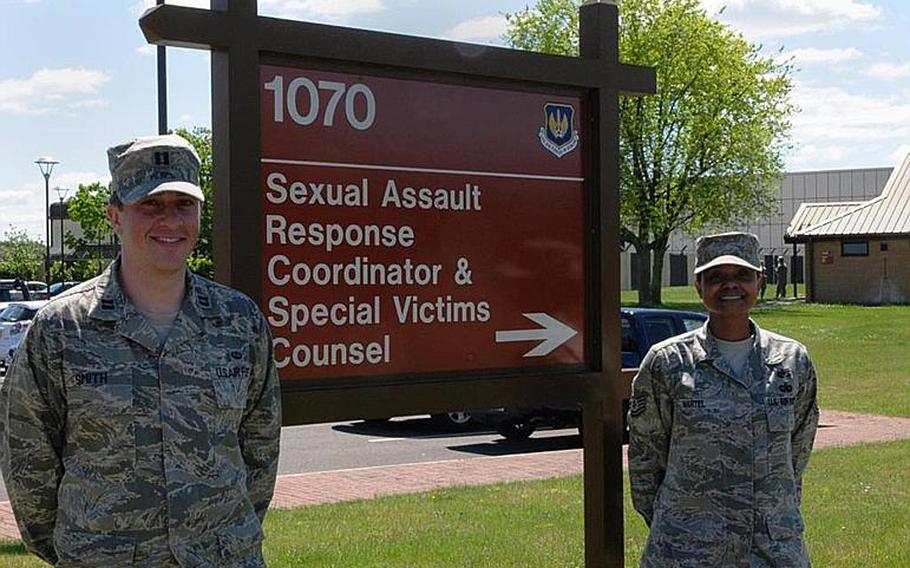 WASHINGTON — Most of the time, the interests of a servicemember who’s been sexually assaulted will line up with those of a military prosecutor: to punish the attacker to the full extent of the law.

Perhaps a victim doesn’t want her sexual history aired in court, but the prosecutor pushes ahead anyway. Maybe an accuser in a rape case wants nonjudicial punishment imposed so he doesn’t have to appear in court at all. Or perhaps she’s afraid that pushing to have a rapist brought to justice will result in career-ending retaliation.

In such cases, the victim fears being victimized once again — not by another servicemember, but by the system itself.

But that may be changing. As of this week, sexual assault victims from each service branch have the right to attorneys of their own to guide them through a sometimes confounding military system.

In August, Secretary of Defense Chuck Hagel ordered the creation of special victims advocacy programs, telling the services to have them up and running by Nov. 1, and fully up to speed by Jan. 1. The order came on the heels of a string of scandals that highlighted the military’s inability to stop sexual assaults in the ranks.

The new programs to some degree are modeled after the Air Force’s Special Victims’ Counsel Program. The program, with 24 full-time military attorneys, or SVCs, began in January and has served more than 550 airmen worldwide.

Col. Dawn Hankins, chief of the program, said surveys of clients whose cases have ended show that 98 percent would recommend the program to a friend. When sexual assault statistics for fiscal 2013 come in early next year, she said the Air Force might begin to get some idea of whether the program is doing what it’s designed to do — convince victims they don’t have to be afraid to report sex assaults.

“Part of our program is to increase the victim’s trust and confidence in the system to overcome some of those barriers to reporting,” Hankins said.

Groups that advocate for military victims of sexual assault, along with critics in Congress, have long argued that the military justice system intimidates many victims into remaining silent, pointing to Defense Department survey data showing that incidents of unwanted sexual contact are heavily underreported by women and men alike.

They also point to cases like that of Air Force Tech. Sgt. Jennifer Smith, who said in a 2012 complaint to the Air Force inspector general that her report of an assaulted by another airmen had essentially ignored by superiors, and that women throughout the Air Force face hostile working conditions.

“Rather than disciplining men who harass and assault their female peers, the Air Force turns a blind eye to misconduct and instead retaliates against female Air Force personnel whenever they seek to defend themselves or otherwise mitigate the severe hostility of the Air Force environment,” the complaint said in part.

Officials who run the SVC programs say that linking victims up with their own attorneys will empower victims by helping to calm fears that reporting could result in retaliation from superiors.

Col. Jay McKee, an Army attorney and program manager of the Army’s special victims counsel program, oversees 53 attorneys worldwide. Although the program only opened its doors a few weeks ago and has been officially operational for less than a week, many of the SVCs are already doing robust business, particularly on large bases. Victims connect with SVCs when they’re referred by Army victim advocates or medical personnel, McKee said.

None of the attorneys are afraid to strongly push for their clients’ rights against zealous, command-directed prosecution, or against aggressive tactics of defense attorneys, he said. In fact, that’s what’s expected of them.

“Their sole purpose in life is to zealously represent the victims of sexual assault,” said McKee said.

Both the Army and the Air Force are studying the programs to determine if more SVCs are needed to handle growing client loads, McKee and Hankins said.

The Navy cranked up its Victims’ Legal Counsel Program on Aug. 15. Nine judge advocates are working with victims in locations including the U.S. Naval Academy, Guam and San Diego, and 20 more will be in place by January, said Jennifer Zeldis, spokeswoman for the Judge Advocate General of the Navy.

Meg Garvin, executive director of the National Crime Victim Law Institute, which trains attorneys as civilian victims advocates, said the rise of victims advocacy in the civilian world is bringing about a cultural change — with the perspectives of victims now considered crucial to the criminal justice systems. SVCs could also have a dramatic effect on the military, she said.

Garvin, who has worked with each service branch’s nascent SVC program, said one valuable aspect of the programs is that victims now can talk about the pros and cons of openly reporting assaults, or keeping reports restricted — meaning victims can receive therapy and services without initiating a criminal case. Such discussions can help victims overcome fears about reporting crimes.

“It has the potential to reduce barriers,” she said. “They allow the survivors to talk to someone in a privileged context and truly understand everything that might happen if they report.”