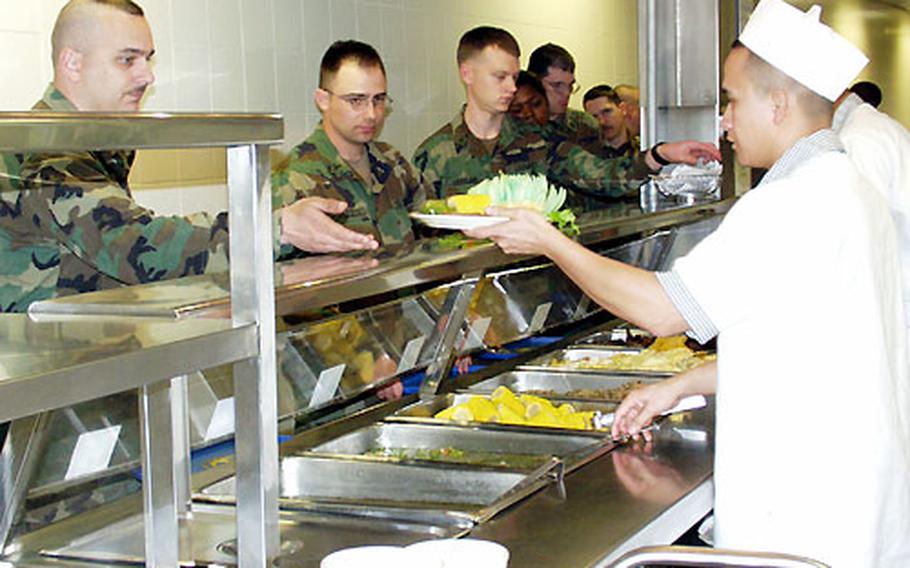 Petty Officer 3rd Class Ralf Williams, right, dishes out lunch to a sailor at the Naval Station Rota, Spain, galley on Friday. Base shops have extended hours and the galley temporarily won’t serve family members of military personnel because of the influx of people at the naval station. The base population has grown due to the U.S. military buildup in preparation for a possible war against Iraq. (Scott Schonauer / S&S)

Petty Officer 3rd Class Ralf Williams, right, dishes out lunch to a sailor at the Naval Station Rota, Spain, galley on Friday. Base shops have extended hours and the galley temporarily won’t serve family members of military personnel because of the influx of people at the naval station. The base population has grown due to the U.S. military buildup in preparation for a possible war against Iraq. (Scott Schonauer / S&S) 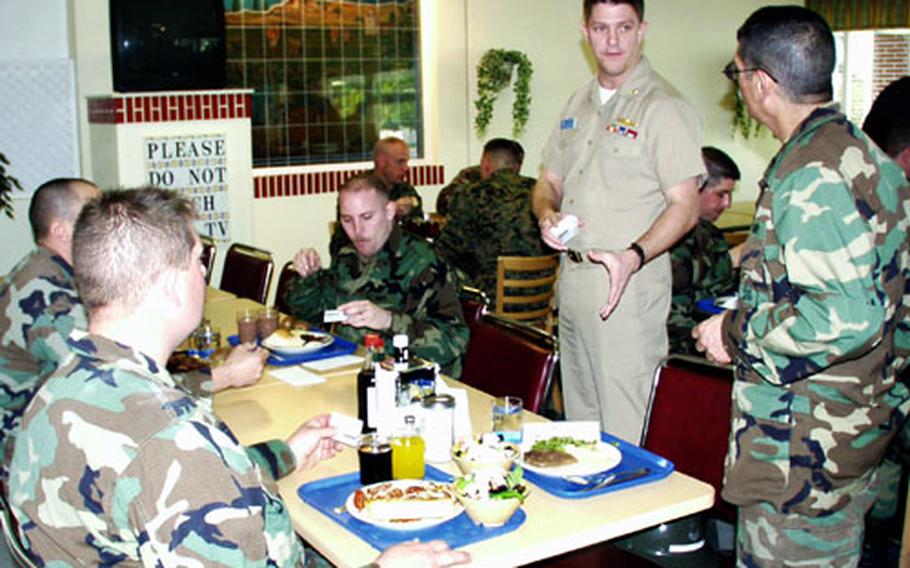 Lt. Paul Morris talks with a group of sailors at the Naval Station Rota galley in Spain Friday after handing out free phone cards provided by the Navy Exchange. (Scott Schonauer / S&S)

NAVAL STATION ROTA, Spain &#8212; The line at the galley stretched from the silverware rack, through the dining room, past the register, out the door, down a sidewalk and to the parking lot several hundred feet away.

And that was just for breakfast.

That long line one recent Sunday morning is just one eye-opening example of how much Naval Station Rota in southern Spain has grown in the past several weeks.

As the Pentagon continues to send more troops to the Persian Gulf for a possible confrontation against Iraq, the base has emerged as a hub for military personnel en route to the region.

The volume of people has put a slight strain on some base services, forcing some places, such as the galley, to make changes. They include:

&#182; The Morale, Welfare and Recreation Department adding more off-base trips and putting on a late-night movie at the theater.

&#182; Security patrolmen cracking down on speeders to protect the higher number of pedestrians walking base roads.

&#182; The lodging staff for transient personnel doubling up guests in rooms and finding people rooms out in town.

Capt. John Orem, the U.S. commander of the base, urged on his weekly radio show and in a recent column in the base newspaper for people to be patient.

&#8220;The flip side to these new deployed and transient personnel is that we will find our [naval station] facilities more crowded than we are accustomed to,&#8221; he wrote.

What Rota is going through is not unlike what some other U.S. bases in Europe are coping with as they support the buildup in the Middle East, peacekeeping operations in the Balkans and the war against terrorism in Afghanistan and the Horn of Africa.

The Navy will not release figures on how much the naval station population in Rota has grown, but there is plenty of anecdotal evidence that this sleepy base is now wide awake.

Navy Seabees have constructed 44 temporary wooden barracks at the fairground to house as many as 600 transient and deployed personnel.

Every day, the air terminal is packed with servicemembers dressed in desert fatigues heading to places such as Bahrain and Kuwait. The pier has become like a truck stop for ships needing refueling and crews seeking some rest.

Gateway to the Med

The Pentagon has about 3,000 active-duty personnel permanently stationed in southern Spain, mainly because of its location on the Atlantic Ocean.

The installation &#8212; actually a Spanish base shared with American forces &#8212; is halfway between the United States and the Persian Gulf, making Rota an appealing stop logistically for cargo planes and ships.

Service managers have had to make a slew of changes to accommodate the flood of people coming and going.

More chairs and tables have been added to the dining area. There are more cooks, and commands stagger their meals times. Military retirees and family members of active-duty personnel are no longer allowed to eat at the galley &#8212; at least temporarily &#8212; to make room for transient personnel.

Business is up about 30 percent at Navy Exchange stores, where quick-grab snacks are flying off the shelves, general manager Gerald Outar said.

A &#8220;contingency staff&#8221; of additional cashiers keeps the lines moving, and buyers are ordering more products to keep shelves stocked.

The products in high demand for transient troops heading to the desert include footlockers, CDs, DVDs, sunblock and Camelbaks. The base&#8217;s uniform store has also added more desert fatigues to meet demand.

Deployed personnel who will stay at Rota a little longer are looking for bigger items, including mountain bikes.

To make it easier for troops to call home, the exchange plans on putting a new phone-card vending machine at the temporary barracks camp. The base handed out 500 free NEX calling cards &#8212; which offer calls at 8.5 cents per minute to the States &#8212; to visitors. The cards are also available at other NEX locations across Europe.

The fitness center is still packed at peak hours, but workers have enforced limitations on how long people can use popular pieces of equipment.

Additional day trips to area cities and fiestas are available for anyone who wants to go.

The influx of people is just the beginning.

While base personnel scramble to serve the people heading to the Persian Gulf, they also know that eventually they all &#8212; hopefully &#8212; will come back. That could present even bigger challenges.

Base stores already are stocking up on merchandise to prepare for the return home of thousands of troops.

Personnel stationed at Naval Station Rota in Spain want to make temporarily deployed servicemembers feel at home during their stay.

The base has launched an &#8220;Adopt-a-Service Member&#8221; program to bring together base residents with those deployed to the base.

Capt. John Orem, the base&#8217;s U.S. commander, kicked off the program last month as an effort to make visitors feel more comfortable during their short tour.

Residents can invite a deployed servicemember for a home-cooked meal, take them on a day trip to one of the area&#8217;s beautiful villages or just offer a place for them to hang out. The aim is to offer deployed personnel a break from the barracks life.

The chapel is looking for people on base who are interested in sponsoring a servicemember. For more information, contact Chaplain Dan Brown at 956-82-2161 or by e-mail at brownda@navsta.rota.navy.mil.