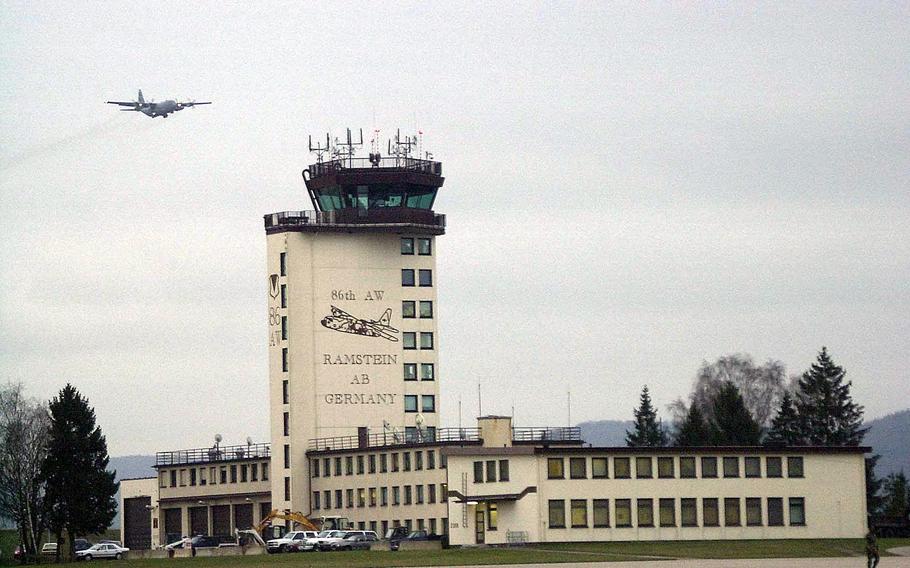 A C-130 aircraft flies over a tower at Ramstein Air Base, Germany, on Dec. 17, 2002. Six of the nine U.S. servicemembers wounded during an insider attack -- which killed Maj. Gen. Harold J. Greene on Tuesday, Aug. 5, 2014, in Afghanistan -- were flown to Ramstein and transferred to Landstuhl Regional Medical Center where they are listed in stable condition. (David D. Underwood/U.S. Air Force)

KAISERSLAUTERN, Germany — Six of the nine U.S. servicemembers wounded when a suspected Afghan soldier opened fire on coalition forces at a defense university in Kabul are in stable condition at a U.S. military hospital in Germany, officials said Friday.

The attack on Tuesday killed Maj. Gen. Harold J. Greene, the first general officer killed in hostilities overseas since the Vietnam War, and wounded more than a dozen others, including nine Americans.

Six of them were flown to Ramstein Air Base in Germany and transferred to Landstuhl Regional Medical Center, where they were in stable condition, spokesman Chuck Roberts said.

Five were being treated for gunshot wounds, while the sixth was injured by shrapnel. Coalition officials in Afghanistan saidthree others were treated at the military hospital at Kabul International Airport and were released.

Roberts said he could not release the names of the wounded.

The Telegraph of Macon, Ga., said two of the Americans injured were graduates of Georgia Military College and identified them as U.S. Army Capts. Jeremy Haynes and Ibrahim Tantawi. The paper said they were in Germany in stable but critical condition. Haynes was serving as aide-de-camp to Greene, the paper said.

A German brigadier general and a senior Afghan commander were among those wounded in the insider attack at the Marshal Fahim National Defense University outside Kabul. The lone gunman was killed.

The attack remains under investigation.