Servicemembers weigh many options in deciding whether to re-enlist 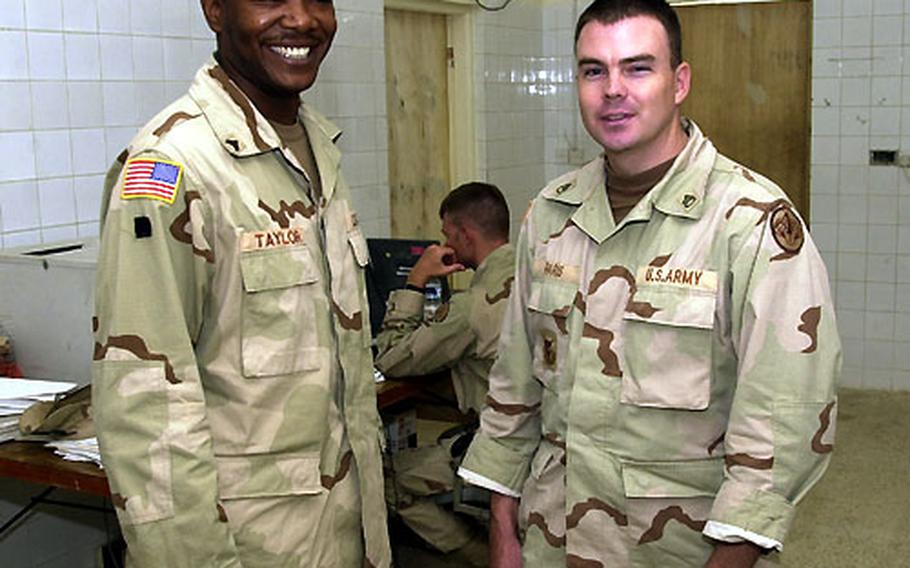 Day Six of a seven-day Stars and Stripes series on conditions and morale in Iraq.

BAGHDAD, Iraq &mdash; Deploying to Iraq has helped some troops decide that military life is not for them. But others consider a number of factors in deciding whether to re-enlist.

Some soldiers predict that long deployments will cause a mass exodus. Others say that those who don&rsquo;t want to deploy and join the fight should just get out and follow another career.

To some extent, war separates the warriors from the whiners. When the RPGs start sailing through the air and units are taking small-arms fire, some soldiers &ldquo;just want to be back home on the couch drinking Budweiser,&rdquo; said Staff Sgt. Michael Paris, Rear Headquarters, Headquarters Troop, 3rd Armored Cavalry Regiment, a career counselor. &ldquo;Others are totally happy, and thriving on it.&rdquo;

Meeting a soldier&rsquo;s immediate needs with assignments and bonuses may override all other considerations, Paris said. &ldquo;A lot of it is the here and now,&rdquo; he said.

For every soldier who&rsquo;s motivated, there&rsquo;s another who says, &ldquo;&lsquo;I don&rsquo;t need it. I just want to get out because of where we are,&rsquo;&rdquo; said Sgt. Andre Taylor at the 2nd Troop, 3rd ACR&rsquo;s Headquarters, Headquarters Troop in Fallujah, Iraq.

Neither rank nor age is a predictor of who stays and who separates, said Taylor, troop re-enlistment NCO. &ldquo;You got a staff sergeant with 12 years in versus the private. And you think someone with 12 years in would re-up, but they&rsquo;re the ones we&rsquo;re losing.&rdquo;

While all the branches in the military may be losing some troops, none is losing more than it expected.

&ldquo;We have not yet seen any adverse indications with respect to recruiting or retention that are notable,&rdquo; said Defense Secretary Donald Rumsfeld on Thursday. &ldquo;There&rsquo;s one indicator in one service with respect to one category that is soft,&rdquo; he continued, and Gen. Richard Myers, chairman of the Joint Chiefs of Staff, confirmed that it was for the Army Reserve component.

&ldquo;On the other hand,&rdquo; Rumsfeld said, &ldquo;the effects of a stress on the force are unlikely to be felt immediately; they&rsquo;re much more likely to be felt down the road, so we have to be attentive to that, and we are.&rdquo;

Each service met or exceeded recruiting goals for fiscal 2003, which ended Sept. 30. The Air Force and Marine Corps met their goals well before deadlines. The Navy met its goal, as did the Army, even surpassing its target for the reserve component by 3.6 percent, according to Army recruiting Command spokesman Doug Smith.

In the Navy, the re-enlistment rate for first-termers from October 2002 to June 2003 was 70.3 percent, according to a news release. The Navy&rsquo;s goal was 56 percent. The Air Force re-enlisted at a 60 percent rate. And the Army needed 13,833 first-term soldiers to meet its goal; 14,599 soldiers re-upped.

Paris&rsquo; job is getting more difficult because many servicemembers are looking at a one-year, unaccompanied tour of South Korea after Iraq, he said. &ldquo;It&rsquo;s hard to sell Korea after doing a rotation in the desert.&rdquo;

Asked if reducing deployments to six months from a year would help retention, Paris and Taylor agreed it wouldn&rsquo;t make any difference. Soldiers know they&rsquo;ll be deployed the same amount because there&rsquo;s too few soldiers doing too many jobs, they said.

One reservist cited deployments, poor living conditions and lack of communications as issues that he thinks will lead to &ldquo;mass exits.&rdquo;

Master Sgt. C. J. Nouse, 39, with the 372nd Military Police Company, is in his second deployment since Sept. 11, 2001. &ldquo;In the last two years, I&rsquo;ve only seen my family four months,&rdquo; he wrote. If the military can&rsquo;t improve conditions and slow down operation tempos, &ldquo;I know these brave men and women WILL exit the military when they get home.&rdquo;

Yet for every fed-up soldier, there seems to be one staying in.

Before Iraq, deployments were good for retention, according to the Army&rsquo;s top NCO in Iraq. Since 1995, Heidelberg, Germany-based V Corps has had the Army&rsquo;s highest retention rates, said V Corps Sgt. Major Kenneth Preston.

When he was with the 11th Armored Cavalry Regiment on the German border during the Cold War, his regiment spent as many as 285 days a year deployed, Preston said. &ldquo;So everybody thought we&rsquo;d have low morale and low retention units. But the 11th ACR was a focused, proficient unit with high esprit de corps,&rdquo; he said.

He&rsquo;s seen the same thing in Bosnia and Kosovo with the 1st AD.

&ldquo;But when it comes down to it &hellip; they&rsquo;re contributing to something that&rsquo;s bigger than themselves. It&rsquo;s not make-work mission, it&rsquo;s a real-world mission.&rdquo;

However, there are soldiers &ldquo;with a 9-to-5 work ethic and they didn&rsquo;t come into the Army to do that,&rdquo; Preston said. When war came, &ldquo;it was a reality they weren&rsquo;t ready for.&rdquo;

Others are using the chance to re-enlist to head back to the States or another unit, as well as cash in on their service to their country.

Re-enlistment bonuses earned under the military&rsquo;s tax-free status while in Iraq provide a strong incentive to stay in the Army.

&ldquo;That kind of money makes a difference, Samuel said. And while his new contract requires an 18-month tour in Korea, he said, &ldquo;at least I&rsquo;m getting out of here.&rdquo;

Spc. John Johnson, with the 101st Airborne Division&rsquo;s 3rd Brigade, used his re-enlistment to head back to the States, but only after his wife signed off on his re-upping. &ldquo;I really didn&rsquo;t think she would go for it,&rdquo; he said.

But that was before he explored the possibility of recruiting duty &mdash; a job that would give him at least three years in a nondeployable status and, under new rules handed down in August, would likely pull him out of Iraq before the division rotates back the United States next spring.

His squad leader, Staff Sgt. Steven Sills, signed up for another four years in the Army with a guaranteed assignment to an airborne unit in Alaska.

&ldquo;I&rsquo;m hoping for a little bit of a breather there,&rdquo; he said.

If nothing else, he&rsquo;ll likely get to leave Iraq several months early, he said. &ldquo;And that&rsquo;s good, too.&rdquo;

Every decision on whether to stay has a story

&ldquo;My wife and I had a deal before I came. If I didn&rsquo;t make the [promotion] list, it was time to go,&rdquo; said Staff Sgt. Greg Brobst out of Fort Carson, Colo.

Just because he&rsquo;s made sergeant first class doesn&rsquo;t solve one elemental problem: He loves the Army while his wife, Kim, hates it.

She hates it because &ldquo;she thinks I&rsquo;m wasting a $40,000 education,&rdquo; said Brobst, who has a degree from Penn State.

&ldquo;I love my wife. I love my job. And somewhere in between is where I walk.&rdquo;

Spouses often have a major say in a soldier&rsquo;s decision to re-enlist.

&ldquo;The other day, I had a soldier who wouldn&rsquo;t even talk to me,&rdquo; said Sgt. Andre Taylor, re-enlistment NCO for the 2nd Squadron, 3rd ACR, based in Fallujah. &ldquo;Then he called his wife, and she told him, &lsquo;You need to stay in. You need to take this assignment,&rsquo; and he signed the contract in 30 seconds,&rdquo; Taylor said.

War is the ultimate test of dedication, but disillusionment with the Army can set in early in enlisted careers.

Just back from the Iraq war, Sgt. David Warner said his deployment is a minor consideration in his decision not to re-enlist. &ldquo;Day in and day out, I worked with super people. I really enjoyed that part of it,&rdquo; he said.

At Baumholder&rsquo;s Transition Center in August, Warner, 36, said he&rsquo;s walking away from the Army. He joined in 1999 to take advantage of the Student Loan Repayment Program, which would help him make the $600-a-month payment on his $85,000 in student loans incurred while earning his law degree from Thomas Cooley College in Lansing, Mich.

But at the end of the first year, no money had gone to the payment program. It took a congressional inquiry through former Rep. Dick Armey, R-Texas, to get the situation resolved, Warner said. The tuition problem was just the beginning, he said.

&ldquo;Now they&rsquo;re telling 1st AD people &lsquo;a year&rsquo; [in Iraq]. But as we get into the deployment, they&rsquo;ll find there&rsquo;s no one to replace certain units, and those units might have to stay longer.