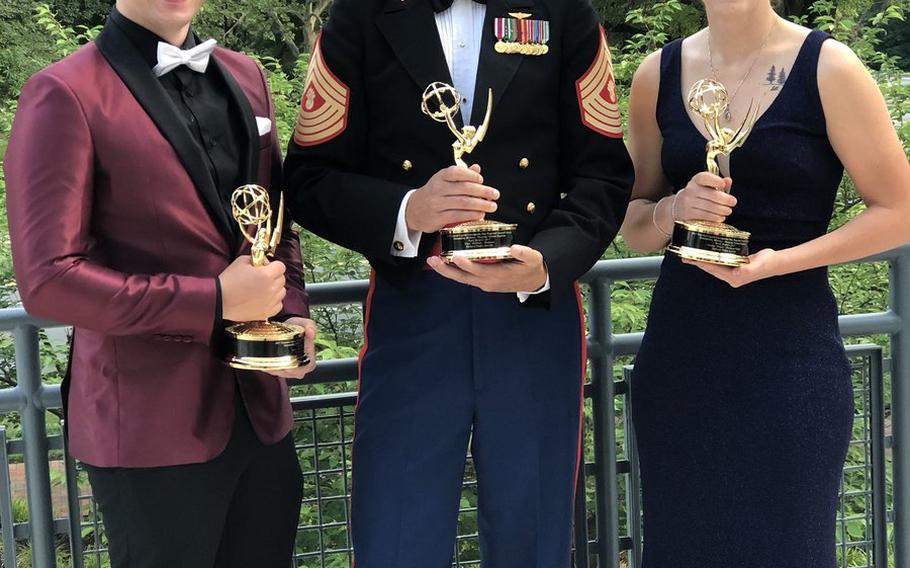 Servicemember and veteran storytellers were honored by the National Academy of Television Arts & Sciences at regional award ceremonies this month.

The military men and women received coveted Emmy awards at events to honor achievements in news, sports, and documentary filmmaking.

They won’t be part of the Primetime Emmys in Los Angeles but they got the same sort of shiny statuettes that tearful Hollywood stars will brandish during acceptance speeches in fall.

“[The award ceremony] was an amazing experience. You look around the room and you were seeing tons of people that you see on TV every day,” Air Force veteran Pete Ising, who won an Emmy Saturday, told Stars and Stripes in an email Wednesday.

Ising and his collaborator Kevin Miller, also an Air Force vet, were recognized by the Maryland/National Capital/Chesapeake Bay chapter of the national academy for “Stearman,” a video produced for Airman Magazine showcasing the friendship an Air Force Reserve first sergeant and a 96-year-old World War II veteran formed around a shared love of flying Stearman biplanes.

“It was a great day but it all went so fast that it’s almost like I don’t even remember it,” Ising said.

Marine Master Gunnery Sgt. Chad McMeen, Sgt. Annika Moody, and Grant Stolz received Emmys from the same chapter Saturday for “Body Bearers,” a short documentary about the 15 Marines who carry the caskets at funerals for Marines at Arlington National Cemetery.

At the Michigan Emmy Awards on June 16, Tyler Prince and Army Sgt. 1st Class Jose Ibarra took home Emmys for their piece “Spc. 5 James McCloughan: ‘They Called Me Doc,’” about an Army medic who saved the lives of ten soldiers at Nui Yon Hill in Vietnam and later received a Medal of Honor.

“I had no expectation that we would even be nominated, let alone win,” Prince told Stars and Stripes via email Tuesday. “That story represents several weeks of my life so being recognized for something you put your heart and soul into is incredibly satisfying.”