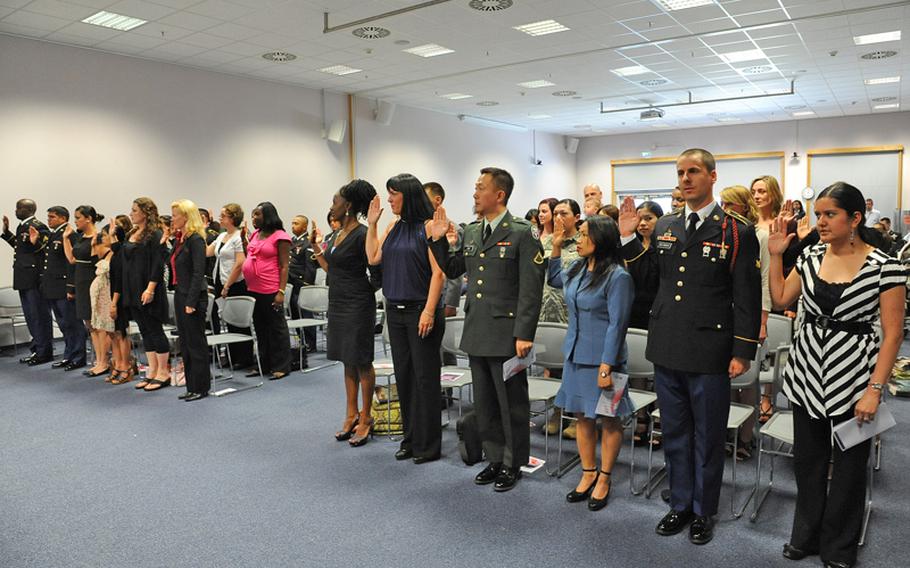 Buy Photo
Thirty-seven new American citizens take the oath of Allegiance at a ceremony at the U.S. consulate in Frankfurt, on Wednesday. (Michael Abrams/Stars and Stripes)

Buy Photo
Thirty-seven new American citizens take the oath of Allegiance at a ceremony at the U.S. consulate in Frankfurt, on Wednesday. (Michael Abrams/Stars and Stripes) 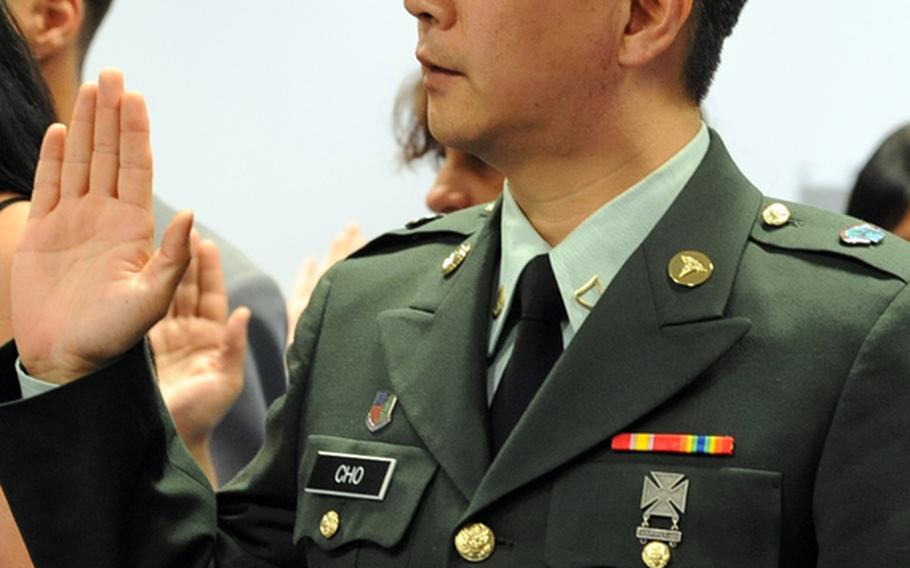 Buy Photo
Private First Class Joon Cho, from South Korea, takes the oath of allegiance to become an American citizen at a naturalization ceremony in Frankfurt, on Wednesday. (Michael Abrams/Stars and Stripes) 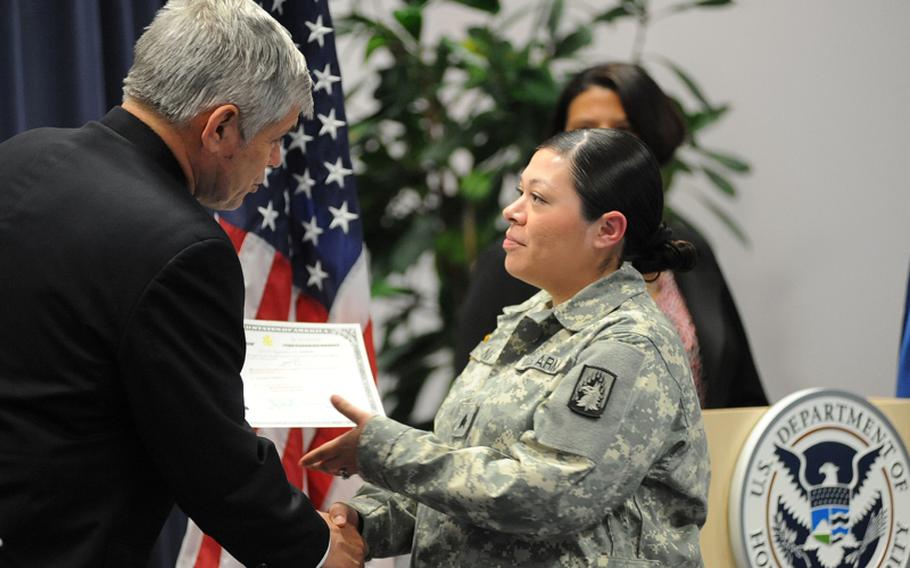 Buy Photo
Sgt. Rocio King accepts her certificate of naturalization from U.S. consul general Edward M. Alford during a ceremony in Frankfurt on Wednesday. King, who is from El Salvador, and 36 other candidates became American citizens at the ceremony. (Michael Abrams/Stars and Stripes) 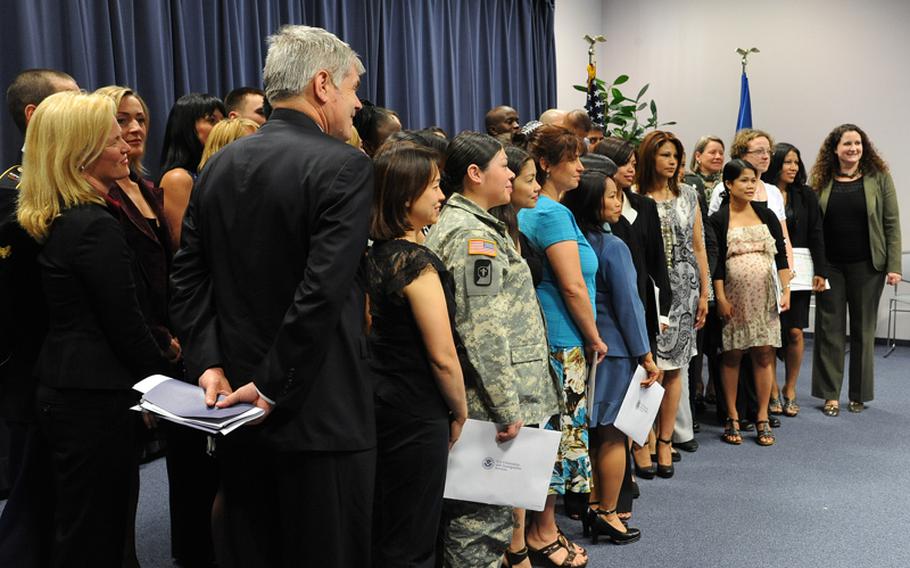 Buy Photo
New citizens and consulate officials pose for a group photo following the naturalization ceremony at the U.S. consulate in Frankfurt, on Wednesday. (Michael Abrams/Stars and Stripes) 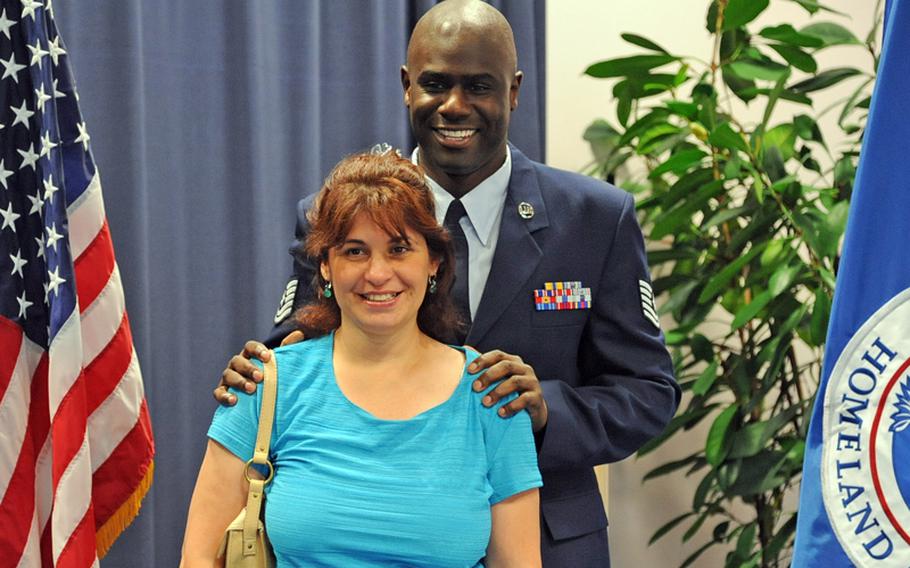 FRANKFURT, Germany &mdash; Citing the oath of allegiance was the easy part.

Clearing the host of hurdles to American citizenship, now, that took some doing, years of patience and plenty of paperwork.

And so, for a good many of the 37 applicants who congregated Wednesday at the U.S. Consulate in Frankfurt, their group naturalization ceremony was a cake walk compared to the sticky road some traveled to get here.

Take Army Pfc. Joon Cho, who hails from Seoul, South Korea. He left his homeland in his late 20s and worked in the restaurant business for about a decade. Cho even owned a restaurant in Hawaii. But, the 41-year-old said, &ldquo;business went down and I had to support my family.&rdquo; That led him to join the military two years ago. He is now assigned to the Landstuhl Regional Medical Center as a lab tech..

Army Cpl. Hassan Abubakar came to the United States from Somalia via Kenya. He left East Africa with his entire family when he was 11, coming of age in Atlanta, Ga., where he attended school, made friends and learned to drive.

And now Abubakar, who is based in Baumholder, is a full-fledged American.

Wednesday&rsquo;s ceremony was tailored to the U.S. military. Ten of the 37 participants were active-duty Army soldiers. The rest were spouses, mostly of the Army and Air Force, though all branches of the military were represented.

The countries of origin at Wednesday&rsquo;s ceremony ranged from Brazil and Belgium to the Philippines and Russia.

Generally speaking, naturalization requirements are a bit more relaxed for servicemembers and military spouses, particularly those living overseas with their deployed partner.

The path toward becoming a naturalized U.S. citizen can take at least five years. Military personnel can meet the criteria in about a year or so, providing they have served honorably. And, as of a few years ago, military spouses overseas have less stringent residence requirements than before, though the process still takes time.

&ldquo;It took us awhile,&rdquo; Air Force Tech. Sgt. Cory Jones of Spangdahlem Air Base, said shortly before his wife, Neslihan, took the oath. &ldquo;It was a hard battle to try and get the documents taken care of.&rdquo;

Afterward, Neslihan Jones, who is of Turkish descent, said she felt &ldquo;emotional and excited because I am an American.&rdquo;

Sgt. Rocio King officially became an American, too, though she&rsquo;s been serving in the Army for eight years. She and her husband, Staff Sgt. Dustin King, felt it was time to get it done before their baby girl arrives in August. That and Rocio King, 25, is working to move into the intelligence field.

&ldquo;I wanted to (become a naturalized citizen) since I enlisted,&rdquo; said Rocio King, who is from El Salvador. &ldquo;It&rsquo;s just going to open a lot more doors for me.&rdquo;

&ldquo;Now I feel like a complete soldier,&rdquo; Cho said. &ldquo;It was about time to become a citizen.&rdquo;