Servicemembers should beware of easy money 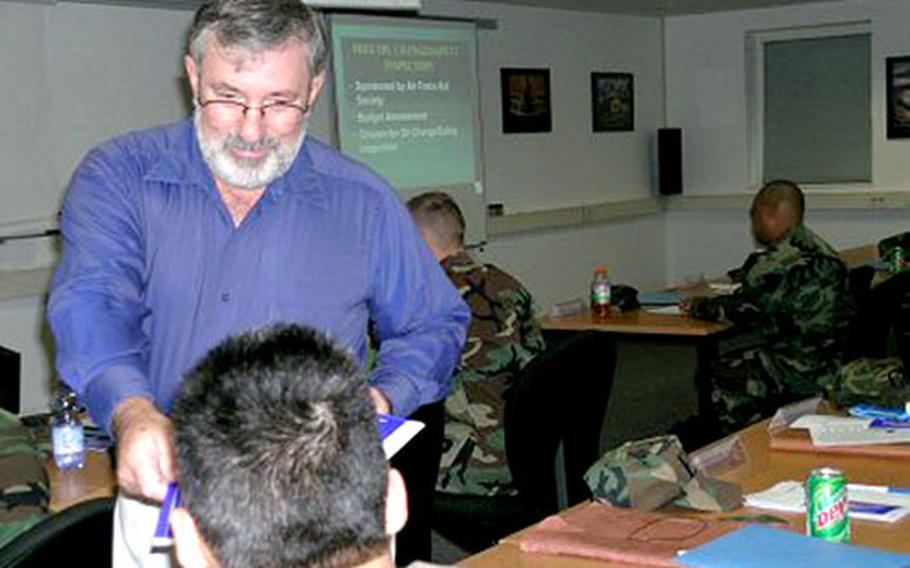 Bill Triplett, a financial counselor with the Family Support Center at Spangdahlem Air Base, Germany, hands out material during a financial seminar for airmen. Triplett has warned servicemembers of the pitfalls with securing loans at off-base providers. (Courtesy of U.S. Air Force)

But one military financial counselor says troops should be careful because the high interest rates and revolving credit often offered by such &#8220;second-chance&#8221; loan companies may leave servicemembers more strapped for cash than before.

&#8220;One of the things I tell people is, if the bank or credit union isn&#8217;t going to talk to you because of bad credit, be careful about going outside the gate,&#8221; said Bill Triplett, a financial counselor with the Family Support Center at Spangdahlem Air Base, Germany.

Loan companies such as Omni Military Loans and Pioneer are based in the United States. Representatives said their branches in Germany are subject to the regulations of the American state in which they are registered &#8212; New York and Nevada, respectively.

Servicemembers are only given loans they qualify for, and at a rate of return they deserve given their past credit history, they said.

Those who don&#8217;t qualify, however, often have a second chance to get the money.

Pioneer offers free financial management counseling to applicants whose loans are denied, said Mark H. Wiggins, a spokesman for the lending institute with an office just outside the military base gate in Hanau, Germany.

Once that counseling is completed, the company will reconsider the loan application, Wiggins said.

Pioneer and other loan company officials maintain that obtaining a loan outside the gate is pretty much the same as getting one at an on-base bank or credit union. Triplett, however, said there are key differences.

In some cases, interest rates at off-base loan companies are as high as 25 percent or 35 percent, he said.

An employee at ABC Insurance near Kaiserslautern that also offers Omni loans, said her company does not keep statistics about the average loan amount, interest rate and payment schedule offered by the company.

Banks and credit unions on base have application forms, credit checks and different interest rates based on past credit history. Off-post lending institutions, like Pioneer or Omni, said they do the same.

But off-base loan companies cater to troops in other ways as well, the Pioneer spokesman said. In some cases, an applicant can get approved for a loan in a couple of hours.

However, unlike quick-cash offices that stand just outside the gates of installations in the United States and the Pacific, German law bars such loan companies from offering high-interest payday loans without credit history checks, Wiggins said.

He said potential clients should always investigate loan rates from several agencies before signing on the dotted line.

He said Pioneer also has a 30-day grace period after issuing a loan. If a troop finds a better interest rate in that time, the loan will be terminated.

Triplett, the Spangdahlem financial counselor, said he wishes the military would not cooperate with such lenders when the companies call to confirm the employment of servicemembers applying for the loans.

&#8220;If you&#8217;ve got some financial problems, rather than putting your neck on the line and borrowing money at an exorbitant rate, go see the financial counselor,&#8221; he said.