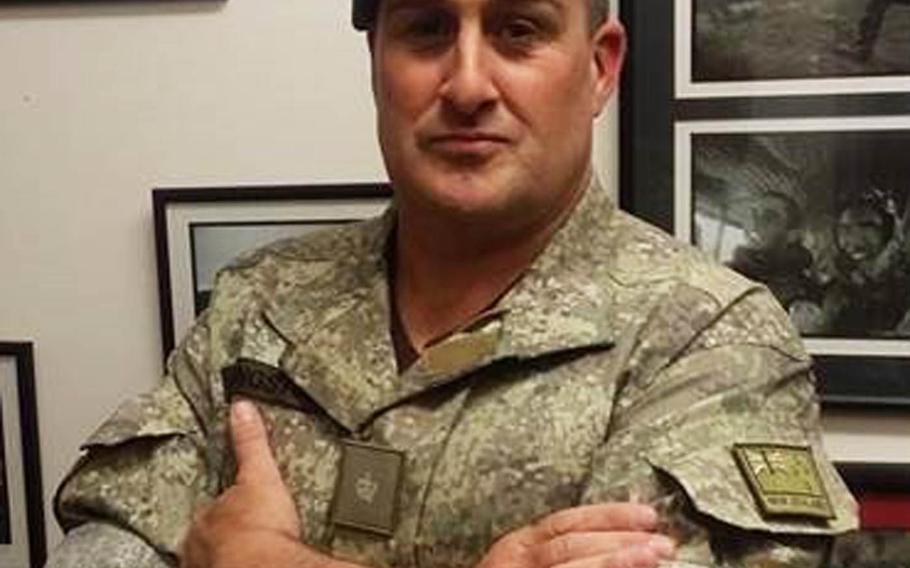 Maj. Kendall Langston, 47, a New Zealand Army reservist and veteran of missions to Bosnia and Angola, started the 22 pushups challenge to raise awareness of veteran suicide and Post Traumatic Stress Disorder after seeing American friends posting about it on social media. (Courtesy of Kendall Langston)

Servicemembers worldwide are cranking out millions of pushups and posting videos of their efforts online to raise awareness about military suicide and post-traumatic stress disorder, a campaign that has crossed over into the civilian community.

Texas-based veterans organization 22Kill is asking people to video themselves doing 22 pushups a day for 22 days and nominate others to do the same. The goal is to reach 22 million pushups in honor of the 22 U.S. veterans who commit suicide each day, says the organization’s website.

22Kill Director Jacob Schick, a Marine who suffered from PTSD after losing a leg to an improvised explosive device in Iraq in 2004, said the challenge started as a fundraising effort in 2013 and went viral after a video was posted by country music star Brantley Gilbert.

Other celebrities and civilians have jumped onboard, and the challenge has spread overseas, where veterans of foreign militaries are grappling with some of the same issues as their American allies.

“It’s been picking up steam, and it has turned into a huge movement that’s really helping to raise awareness of this epidemic that’s plaguing our warrior community,” Schick said.

In America, the pushups are helping bridge a gap between the military and civilian communities, he said.

“The fact that we are losing these warriors to this epidemic comes down to one thing: mental health,” he said. “And it’s not just a warrior issue. A lot of people are walking around with PTSD from being in a car crash or watching a loved one die and probably don’t even know it.”

The only thing worse than suffering is suffering alone, Schick said.

“There are people and entities out there who can help you get better, and you can get better,” he said.

Among those taking on the challenge is Air Force Col. Clarence Lukes, 47, who recently returned to Colorado Springs, Colo., after a yearlong deployment to the Middle East.

Lukes, who was nominated by an Air Force Academy classmate along with several other officers, recently completed the challenge. The pushups weren’t a big deal for the avid runner and rugby player, but they focused his attention on the problems of suicide and PTSD, he said.

“The pushups are really a vehicle for awareness,” Lukes said. “One suicide or one person suffering from PTSD is one too many.”

Education can help solve the problems, said the 20-year Air Force veteran. The pushup challenge is an opportunity for people to learn about issues that servicemembers and veterans live with every day, he said.

“As you are doing the pushups you are more inspired to learn about these things, and you may be more sensitive to those folks and be able to educate people,” said Lukes, who added that people don’t have to experience combat to be affected by PTSD and suicidal tendencies.

“You can be affected just through seeing someone else going through something traumatic,” he said. “We call it a disorder, but feeling helpless or depressed is a natural reaction” to traumatic events. “If it wasn’t for this challenge, we may not even be talking about it.”

Maj. Kendall Langston, 47, a New Zealand Army reservist and veteran of missions to Bosnia and Angola, took the challenge after seeing American friends posting about it on social media.

“A few of my close mates are doing it, and I got nominated,” he said.

The New Zealand Defence Force has deployed troops to Iraq and Afghanistan alongside U.S. forces in recent years.

“There’s a shocking suicide rate in the veteran community,” Langston said. “The ones you see the most about are in the U.S., but there have been incidents in New Zealand as well.”

Kiwi Vietnam and World War II veterans have suffered from PTSD, but the problem was swept under the carpet, Langston said.

“There’s been more awareness about it in recent years, maybe because there are so many young veterans (of Iraq and Afghanistan) and more media coverage,” he said.

Langston recently finished his 22 days of pushups, and the results have been showing in the mirror.

“The wife asked if I could keep doing it,” he said.