Servicemembers moving thousands of pounds of relief supplies to Philippines 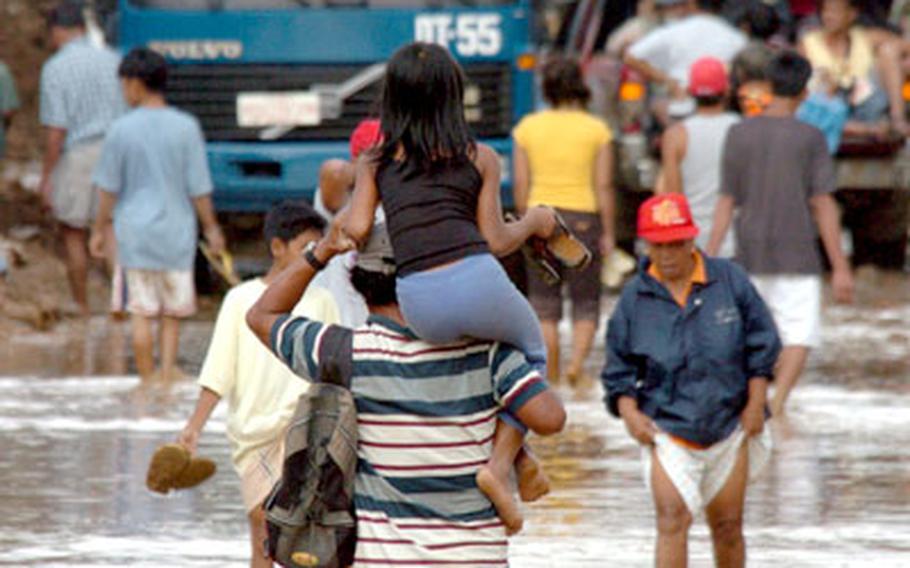 A man carries his daughter Tuesday as he walks through flooded streets of Infanta, one of the drop-off points for U.S. Marines delivering relief supplies in the Philippines. (Jim Schulz / S&S)

More than 600 U.S. Marines, sailors and airmen assisting with relief distribution in the storm-devastated Philippines had transported more than 308,000 pounds of supplies between Friday and Tuesday, Marine officials said.

While in the Philippines, Marine helicopter squadrons from Okinawa and Iwakuni Marine Corps Air Station, Japan, load up and deliver supplies throughout the day from Clark Air Base, north of Manila, and two Philippine air force bases used as makeshift supply depots.

They deliver supplies to four ravaged communities in Luzon.

Thousands of bags of rice, soup and clothing and boxes of water are transported each day, Marine officials said.

The Philippine government is supplying the aid material, which is handed out by the Philippine military and Red Cross. But with roads impassable and bridges washed out, the U.S. Marine aircraft and personnel have been essential for ferrying large numbers of supplies quickly, Philippine leaders have said.

Parts of the Philippines south of Manila were devastated after a string of recent storms.

Floods, caused in part by illegal logging in the mountains, caused a rush of water that carried away people and homes and left huge areas cut off and desperate for help.