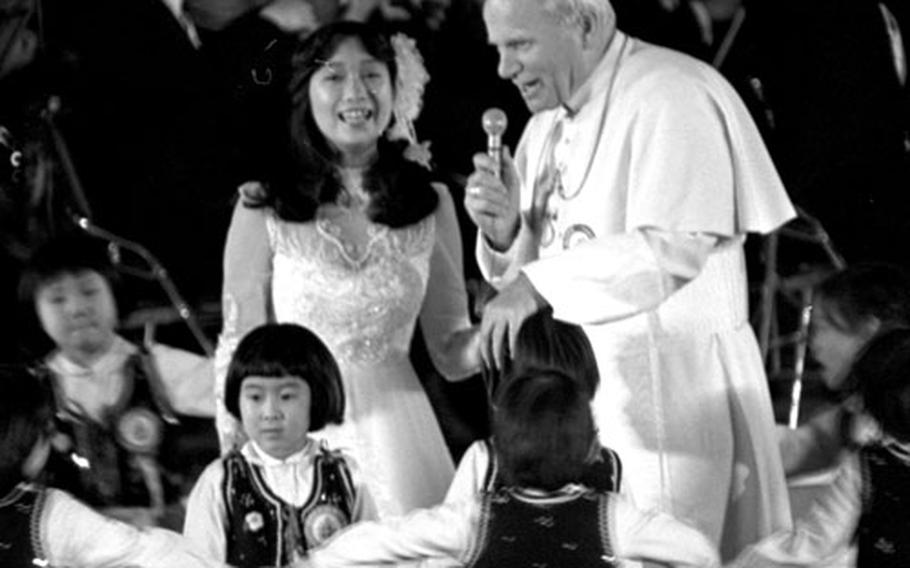 Pope John Paul II at Tokyo&#39;s Budokan Hall during a trip to Japan in 1981. John Paul II, who died Saturday at age 84, traveled to 130 countries on 102 visits outside of Italy during his papacy. Stars and Stripes photographers and writers documented throughout the years. (Stars and Stripes)

Servicemembers and others in the Pacific expressed sorrow Sunday at Pope John Paul II&#8217;s death, as well as appreciation and admiration for his life.

The pontiff, 84, who died Saturday night, had led the church for 26 years.

Navy spouse Karen Quintanilla, of the Roman Catholic community at Sasebo Naval Base, Japan, said she was pleased John Paul II was spared a more protracted final illness &#8220;but I know he didn&#8217;t go really easily.&#8221;

The pontiff gained favor in mostly non-Christian Japan when he visited in 1981 to tour atomic-bomb targets Hiroshima and Nagasaki.

&#8220;He traveled more than any other pope,&#8221; said Ruth Donahue, another Navy spouse in Sasebo. &#8220;That was a special mission of his &#8230; to reach out. He also had a special interest in the youth of the world. People really admired and respected him for his ability to reach out to the youth. &#8230; We just hope the next one will continue to work for unity in the Catholic church.&#8221;

On Okinawa Sunday morning, the 40 or so American and Japanese parishioners at All Souls&#8217; Episcopal Church took a moment to pray for John Paul II, whom the Rev. David Bruce called &#8220;the right pope to serve at the right time &#8230; a very inspired and very dedicated man.&#8221;

John Paul II first visited South Korea in 1984, the church&#8217;s 200th anniversary there, when he canonized more than 100 Korean martyrs. The pope maintained an interest especially in the North-South Korean relationship, urging a reconciliation.

At Osan Air Base in Pyongtaek, South Korea, flags will fly at half-staff in tribute until his internment later this week, said Osan spokeswoman Capt. Stacie Shafran.

The vigil will be &#8220;to pray for the new meeting of the College of the Cardinals and pray for the repose of the pope&#8217;s soul,&#8221; said Bendorf, also the senior Catholic priest for Area IV, covering Army installations in southeastern South Korea.

At a 9 a.m. Sunday Mass at the Camp Walker Chapel, worshippers appeared somber but not surprised at the death.

They understand, Bendorf said, &#8220;that we will have another pope that will help the church move forward. &#8230; Even though we have lost a great man, the church is definitely looking forward to the new papacy and to the time ahead.&#8221;

Chiyomi Sumida and Franklin Fisher contributed to this report.