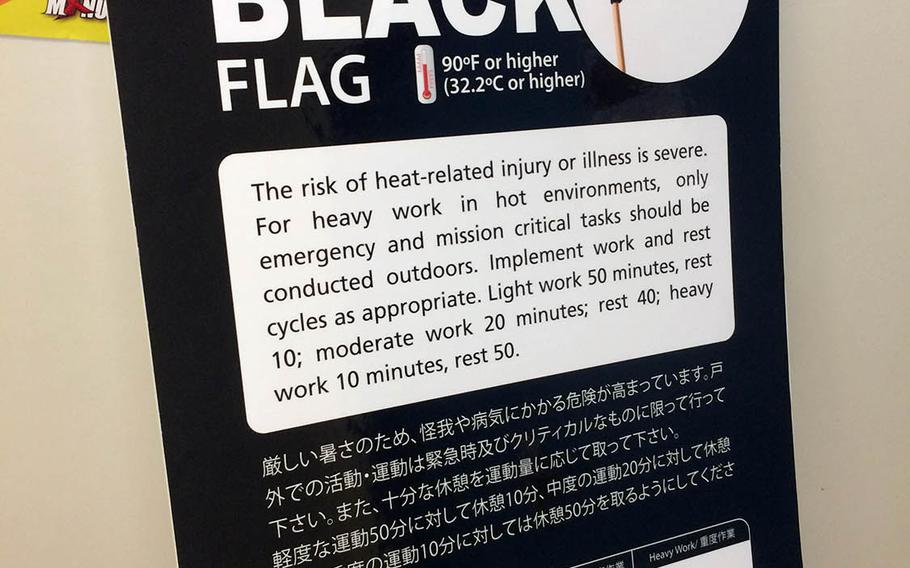 YOKOTA AIR BASE, Japan — Record temperatures are baking the home of U.S. Forces Japan in western Tokyo during a heatwave that has killed more than 30 people over the past week.

“It was the hottest-ever July temperature,” she said, noting that the Air Force has kept heat records at the Pacific airlift hub since 1948.

In the nearby city of Ome, the temperature hit 105 degrees Monday, making it the second-hottest spot in the country after Kumagaya city in neighboring Saitama prefecture, where the mercury soared to nearly 106 degrees — a new Japanese record — according to the Japan Meteorological Agency. The sizzling conditions have hospitalized thousands, caused dozens of deaths and hindered relief efforts in western Japan, where recent floods killed more than 200 people.

The heatwave is caused by a ridge of high pressure that’s parked over Japan and drawing hot air from the south, DuVerney said.

“It looks like it will continue,” she added. The heatwave is expected to last into August, the Japan Meteorological Agency said on Monday afternoon.

Authorities at the base are warning airmen about heat stress in temperatures above 90 degrees. Heat-warning signs on base read: “The risk of heat-related injury or illness is severe. For heavy work in hot environments, only emergency and mission critical tasks should be conducted outdoors, implement work and rest cycles as appropriate.

Military operations have continued, although some personnel were spotted carrying sun umbrellas Monday as they worked on the wing of a C-130J Hercules cargo plane.

Maj. Christopher Stover of Jersey City, N.J., said he brought a warm jersey when he arrived at Yokota last week on temporary duty with the Maryland Air National Guard.

“It’s my first time in Japan and I didn’t know if I’d need warm or cold-weather clothes,” he said.

The summer temperatures and humidity aren’t too different from what he experienced on a deployment to the African nation of Liberia in 2010, he said.

Stover said he plans to carry a decent supply of water during a planned climb of Mount Fuji this coming weekend.