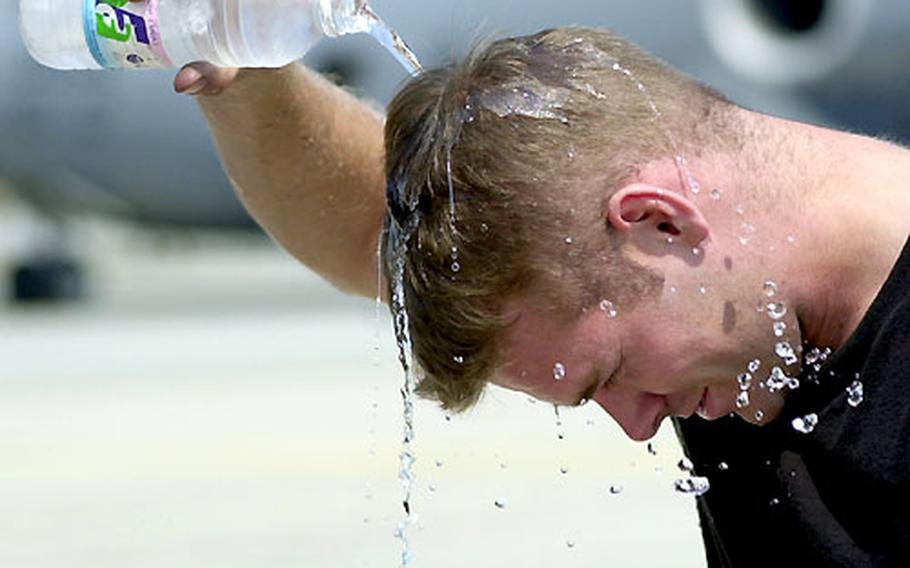 Staff Sgt. Kory Newgard tries to keep cool on a scorching hot day on the flightline at Rhein-Main Air Base, Germany, by pouring some cold water on his head. Newgard, a crew chief from McChord Air Force Base, Wash., was waiting to refuel a C-17 as temperatures in the Frankfurt area reached 100 degrees for the third day in a row. (Raymond T. Conway / S&S)

Staff Sgt. Kory Newgard tries to keep cool on a scorching hot day on the flightline at Rhein-Main Air Base, Germany, by pouring some cold water on his head. Newgard, a crew chief from McChord Air Force Base, Wash., was waiting to refuel a C-17 as temperatures in the Frankfurt area reached 100 degrees for the third day in a row. (Raymond T. Conway / S&S) A toy water fountain was the place to be at Rhein-Main family housing. (Raymond T. Conway / S&S) 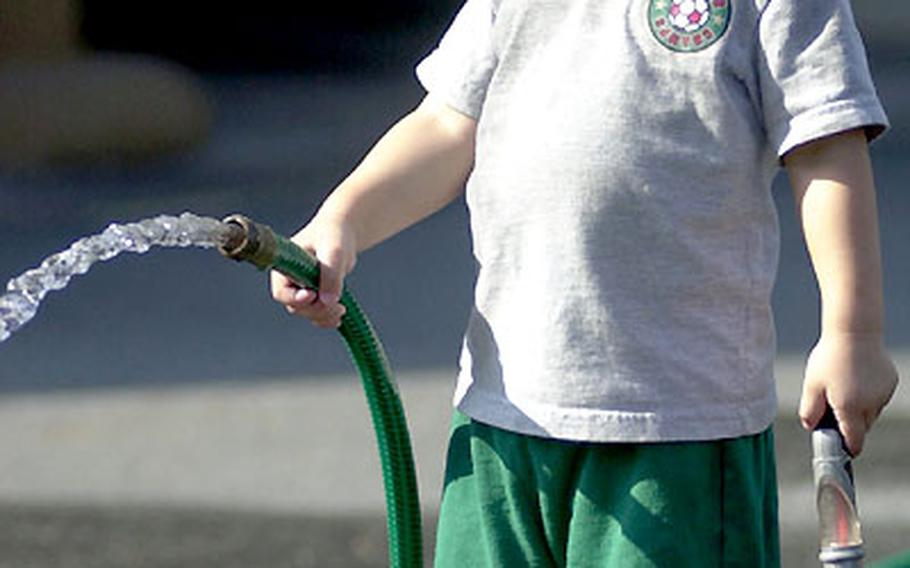 A boy plays with a water hose at the Rhein-Main housing area. (Raymond T. Conway / S&S) After getting water dumped on her head in a surprise attack from behind, Airman 1st Class Jonnee McCurley, center, returns the favor by emptying her cup of water into the face of Staff Sgt. Tommy Palmer on a scorching hot day on the flightline at Rhein-Main Air Base, Germany, on Tuesday. Master Sgt. William Demers, behind McCurley, was driving around the flightline offering ice-cold water and Gatorade to the maintenance troops working on the C-17s at the base. (Raymond T. Conway / S&S)

While it&#8217;s not 115 degrees, U.S. troops and family members in Europe are still sweltering as temperature gauges registered in the 90s and higher for the third straight day. And there&#8217;s no end in sight.

The intense heat wave that has baked much of Europe for weeks is fueling deadly forest fires, causing droughts and damaging crops.

&#8220;Usually, Germany only experiences several hot days in August during the summer, but never like this,&#8221; said Harald Strauss, climatologist at the squadron&#8217;s Tech Services branch.

In regions where air conditioning is uncommon, folks are finding inventive ways to stay cool.

&#8220;Have you ever heard of putting a block of ice in front of a fan?&#8221; asked Misty Gonzalez, the spouse of a servicemember in Darmstadt, Germany, who tries to keep her 16-month-old son as cool as possible. She said she freezes containers of water to place in front of a fan. Chilly water is whipped around as it melts, helping to keep the family cool, she said.

Also in Darmstadt, the School Age Services canceled a trip to an amusement park on Wednesday in exchange for a pool outing in Frankfurt.

Sgt. Seth Lathe of the 32nd Signal Battalion said the weather was fine, but he recently returned from a Middle East deployment where temperatures soared past Europe&#8217;s top highs on a daily basis. Still, he stressed the importance of drinking water, adding that servicemembers should stay within regulation of working and resting periods throughout the day.

A U.S. Army Europe release advises people to drink up to two to four glasses (16 ounces to 32 ounces) of cool fluids each hour in a hot environment.

Also, USAREUR advises to replace salt and minerals through juice and sports drinks, wear appropriate clothing and sunscreen, and to schedule outdoor activities either before noon or in the evening.

Strauss said even the typically cool United Kingdom is having unusual high temperatures.

In fact, the United Kingdom may see its record-hottest day this week. So far, that honor belongs to Aug. 3, 1990, when the temperature in Cheltenham reached 99, which is 37.1 Celsius.

Weather forecasters in the United Kingdom say that could be topped this week. Bookmakers have cut the odds of the temperature reaching 100 from 10 to 1 down to 7 to 2.

The hottest place in the United Kingdom on Monday was London, where the temperature reached 90, even hotter than Barbados (88 degrees), where Prime Minister Tony Blair and his family are on holiday.

Already this week, rail traffic has been slowed because of concerns the rails could buckle in the 90-plus degree heat that has invaded the island.

Trains have been slowed from the normal speed of 110 mph to 60 mph during the hottest part of the days, adding an hour to the commuting time for many passengers. That plan will stay in effect as long as the heat wave continues.

To date, the highest recorded temperature in Europe took place on Aug. 4, 1881, when the temperature reached 122 degrees in Seville, Spain.

For more information on how to keep cool in the heat log on to: chppm-www.apgea.army.mil/heat/