Servicemembers clean up paint from the past 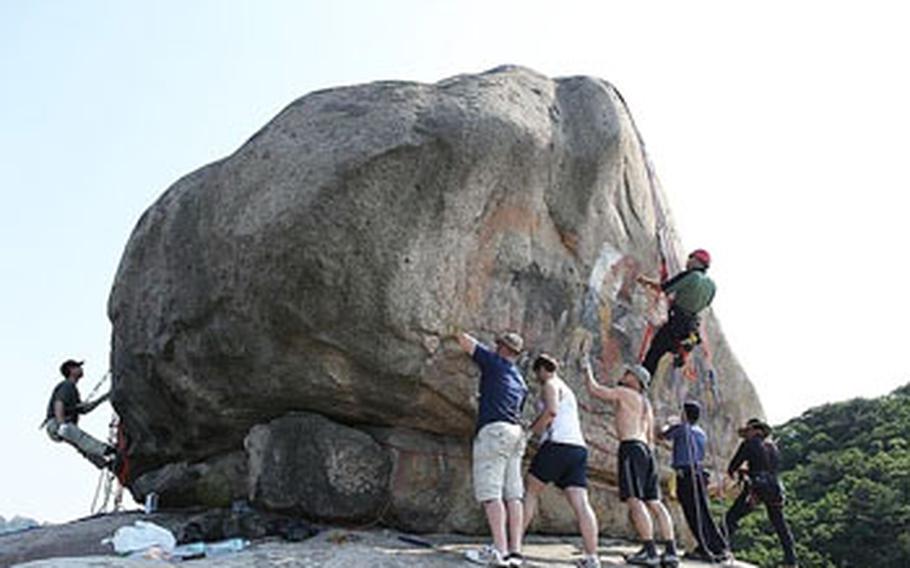 Servicemembers join the Sanyangsarang Hiking Club in June in scraping graffiti off a boulder on a mountain overlooking Uijeongbu. (Photo courtesy of Jang Yong-gi)

UIJEONGBU, South Korea &#8212; An off-hand comment about graffiti painted by Americans on a rocky South Korea mountaintop has sparked an unusual hobby of sorts for several servicemembers of a Yongsan Garrison unit.

Call them Graffiti Busters or the Paint Peeling Posse.

Members of the C2 Intelligence, Plans and Exercise Division of the Combined Forces Command Headquarters in Seoul are making a habit of hiking up mountains to clean graffiti apparently left decades earlier by some of their countrymen.

Abrahamson explained that in the spring, a Korean member of the Sanyangsarang hiking club told him about a boulder on Sapaesan &#8212; a mountain overlooking Uijeongbu &#8212; covered in graffiti apparently painted by U.S. servicemembers "that cast a bad light on Americans. He said it would be great if an American went with them and helped to clean it off."

Further investigation found that the 25-by-9-foot boulder &#8212; called Mushroom Rock by local Koreans and visible from a good portion of Uijeongbu &#8212; was covered in layers of graffiti with markings that may have been used to identify the unit that once was based at a nearby military outpost, or to guide U.S. military helicopters there. Part of the "artwork" was dated "1967," he said.

After three visits to the mountaintop over the past seven months, including one earlier this month, members of the headquarters division and the hiking club managed to scrape off most of the graffiti.

"We got it to a point where from 100 yards away, it would look natural," he said.

In the weeks ahead, the group plans to start work on another mountaintop boulder overlooking Uijeongbu. And Abrahamson said he recently saw yet another graffiti eyesore during a helicopter ride &#8212; an eyesore that will require some rappelling to get to.

"We still have our eyes open, looking for more," he said.