Servicemembers ask for congressional help to stave off mortgage default 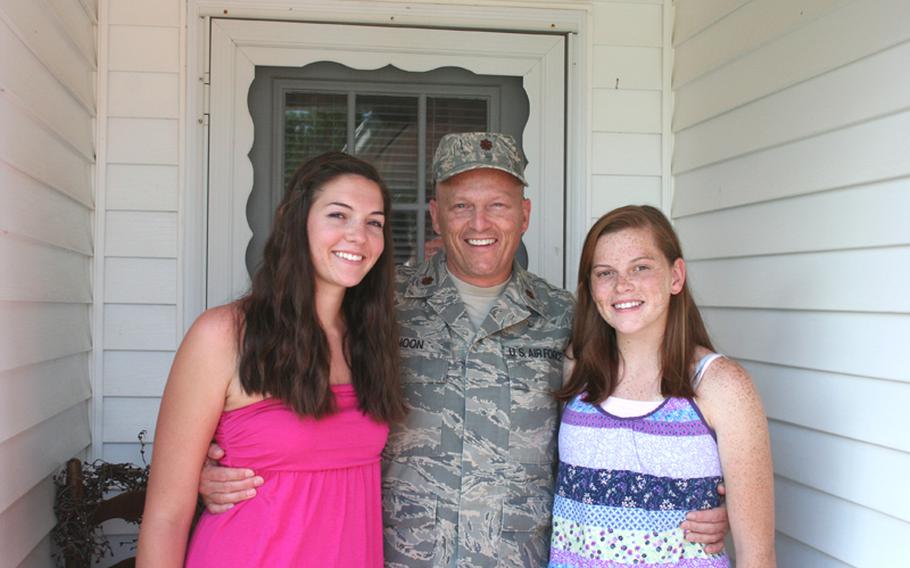 Maj. Mark Noon, with daughters Hannah and Bailey, spend a few moments together at their Niceville, Fla., home, prior to Noon's Qatar deployment last year. Noon is among thousands of servicemembers who were not included in a $855 million government program designed to save military families from hardship related to the housing market crash. (Photo courtesy Maj. Mark Noon)

YOKOSUKA NAVAL BASE, Japan &mdash; It&rsquo;s a 10-hour drive from Maj. Mark Noon&rsquo;s rented mobile home near Little Rock Air Force Base, Ark., to his house, where his wife and children live near Eglin Air Force Base, Fla.

Noon would like nothing more than to rid himself of the underwater mortgage on the Florida home and move his family to his new duty station to live with him. But the housing market crash has made that nearly impossible.

Unlike many civilians, Noon can&rsquo;t walk away from a mortgage or take on debt by selling his house at a massive loss. Heavy debt and bad credit get security clearances revoked, and servicemembers like Noon can&rsquo;t do their jobs without them.

Thousands of other military families stuck with a mountain of housing debt when they were forced to move to a new base have escaped hardship, thanks to a 2009 federal law that funded the Homeowners Assistance Program to reimburse servicemembers for the difference between their purchase and selling prices.

Unfortunately for Noon, he is among thousands of military families who aren&rsquo;t eligible to apply, mainly because of bad timing.

The expanded program only reimburses servicemembers who bought their home before July 2006 but received orders to report to a new permanent base. To qualify, those change of station orders had to come before Sept. 30, 2010.

Noon was sent to Qatar last year on temporary duty orders with the 379th Expeditionary Medical Group until October. The Air Force does not issue permanent change-of-station orders during deployments, so his were issued after the September 2010 deadline.

&ldquo;Basically, because of being deployed, I was denied the opportunity to participate in HAP,&rdquo; Noon said.

This year, Noon is among a small but active group of servicemembers who have pushed Congress to help servicemembers in danger of defaulting. Although they&rsquo;ve found a few sympathetic ears in the House, it now looks as if their efforts will require last-minute intervention if HAP expansion is going to make the 2012 Defense bill.

If it doesn&rsquo;t happen in the next fiscal year, it&rsquo;s unlikely to make it in 2013, where there is already pressure to cut the defense budget.

&ldquo;If it can&rsquo;t get done this year, it is dead,&rdquo; said Army Lt. Col. Chris Meredith, who has contacted multiple congressmen and helped several other servicemembers do the same in an effort to get the program expanded. &ldquo;That&rsquo;s the reality. We&rsquo;ve been saying that to [congressional] staffers all along.&rdquo;

The Defense Department has the legal authority to extend the deadline for permanent duty station transfer orders to Sept. 30, 2012, which would make Noon and others in his situation eligible.

However, it is unlikely to do so without help from Congress because the department also faces a shortfall in funding the applications that have already qualified.

Defense Department spokeswoman Lt. Col. Melinda Morgan said more money will be needed to pay for those claims because the number of eligible applications was higher than expected, and payouts on individual cases were greater than early estimates.

As of February, the military had paid out $725.5 million in HAP funds to 4,825 claimants, leaving little of the fund&rsquo;s $855 million left for the 4,560 claims still being processed. Although officials expect the program to recoup some of its expenses as homes purchased by the government are resold, it still faces a $400 million shortfall.

Morgan said department officials are looking to shift funding to cover the program costs, or ask for additional money from Congress. However, she said there are no plans to ask for new money to extend the program.

In April, Rep. Gerry Connolly (D-Va.) introduced a bill that would have allowed the Defense Department to include servicemembers in HAP that bought a home after the current July 2006 deadline for application.

The bill was not included in the House version of the 2012 Defense bill and hasn&rsquo;t made it out of subcommittee, making its passage unlikely unless it is passed as a standalone bill.

Instead, the only mention of HAP in the House bill is a provision that, within 180 days of the Defense bill&rsquo;s passage, asks the military to estimate costs if the HAP deadlines were extended.

If that passed, Meredith says relief would be come too late to save some from foreclosure.

Meanwhile, there is no mention of HAP in the Senate version of the Defense bill.

Senate Armed Services Committee officials told Stars and Stripes that there was no stated opposition to the House proposal, but that no member requested it be included.

It could still be included in the final version of the bill, if House members make the provision a priority in the two chambers&rsquo; negotiation of the defense budget legislation. But lawmakers have been resistant to any spending increases in recent months, and the White House has already called for $400 billion in reduced defense spending over the next 12 years to help balance the federal budget.

Just by extending the deadline to Sept. 30, 2007, the Defense Department estimates that 2,000 more military families would be eligible for HAP at a cost of $300 million, according to a transcript of Connolly&rsquo;s statement.

Connolly&rsquo;s statement also included testimony from Christine Adams, a Marine spouse who did not qualify under the current deadline.

Adams and her 10-year-old daughter are staying behind in Virginia while her husband transfers to North Carolina, because they cannot refinance their underwater mortgage.

&ldquo;The Department of Defense needs to recognize that the cost of moving their military just got more expensive, accept the fact, and fund it accordingly,&rdquo; Adams stated.

Troops can use their housing stipend to pay for a home mortgage, but do not receive a second stipend when they transfer to another base and still have that hefty mortgage payment. That leaves them paying out-of-pocket for rent in the new location or losing their housing stipend for mortage payments by accepting base housing. Either way, if they can&rsquo;t sell the home, the debt accumulates.

Even though finding money in a Congress focused on cutting the federal deficit is a tough sell, Meredith said, there are several existing programs within the $648 billion Defense budget whose long-term timetables could be extended.

&ldquo;We&rsquo;re not asking for more spending,&rdquo; Meredith said. &ldquo;Were asking them to do efficiencies within the Defense Department budget.

&ldquo;It&rsquo;s an issue of equality,&rdquo; Meredith added. &ldquo;We can&rsquo;t help some combat veterans and ignore the others. We should make them a priority over such things as more aircraft that haven&rsquo;t even been fielded yet.&rdquo;

Master Sgt. Jason Hoover would have qualified for HAP, but the multiple concussions he sustained over six deployments to Iraq and Afghanistan medically disqualified him for his next job.

That in turn delayed his permanent change-of-station orders beyond the September 2010 application deadline.

Hoover sustained the injuries while doing one of the Air Force&rsquo;s most demanding combat jobs. As a tactical air control party, or TACP, Hoover joined infantry and special operations units to coordinate close air strikes.

Had he not been injured, he would have remained at Joint Base Lewis-McChord and kept living in his Washington state home, which has lost about $90,000 in value.

His is now trying to rent out his home while renting another at Kirtland Air Force Base in New Mexico.

&ldquo;If you&rsquo;re serving your country and you get orders to go someplace else, there should be some provision to help us out,&rdquo; Hoover said. &ldquo;My wife and I have saved our money. But there are people out there who can&rsquo;t make do.&rdquo;