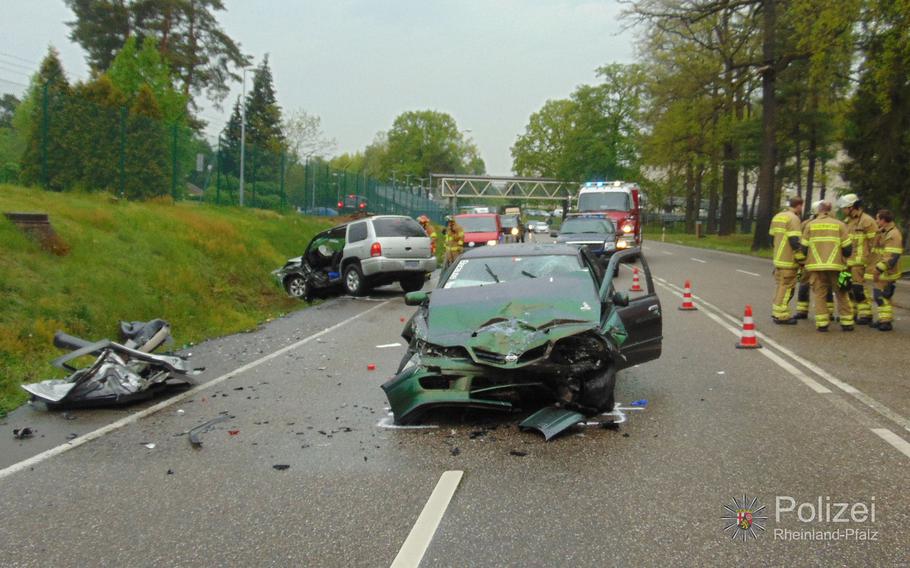 Three people were injured, two of them seriously, in a head-on collision on highway B270 in Kaiserslautern, Germany, on Tuesday, May 10, 2016. (Courtesy Polizeipraesidium Westpfalz)

KAISERSLAUTERN, Germany — A U.S. military member was seriously injured and two others were also hurt in a head-on car crash Tuesday morning on the B270 outside Vogelweh housing area.

The collision occurred about 8 a.m. after the servicemember, a 49-year-old woman, attempted to turn onto the highway from a base exit gate, according to Kaiserslautern police and the 569th U.S. Forces Police Squadron at Vogelweh.

The woman was driving what appeared in accident photos from Kaiserslautern police to be a silver SUV. She was exiting the Third Avenue Gate, which is open only during certain hours for outgoing traffic from the Vogelweh family housing area. Kaiserslautern police, citing witness statements, said the driver attempted to make a left-hand turn toward Hohenecken. Only right-hand turns are authorized from that gate.

The woman’s SUV turned in front of a car traveling toward Vogelweh from Hohenecken. The 23-year-old driver, a local national, was unable to brake or swerve and crashed head-on into the SUV, police said. The driver was hospitalized with serious injuries.

The servicemember was trapped in the SUV, and firefighters had to extricate her from the wreckage, police said. She was airlifted with life-threatening injuries to a hospital in Saarland. A 19-year-old passenger in her car was treated for minor injuries at the U.S. Army’s Landstuhl Regional Medical Center, police said.

The helicopter used to airlift the servicemember to medical care landed on the B270, which was closed for about 90 minutes in both directions.

Officials with the 569th U.S. Forces Police Squadron said the Third Avenue Gate has a combination of pavement markings, barriers and signage to inform drivers appropriately. German and military police are investigating the accident.