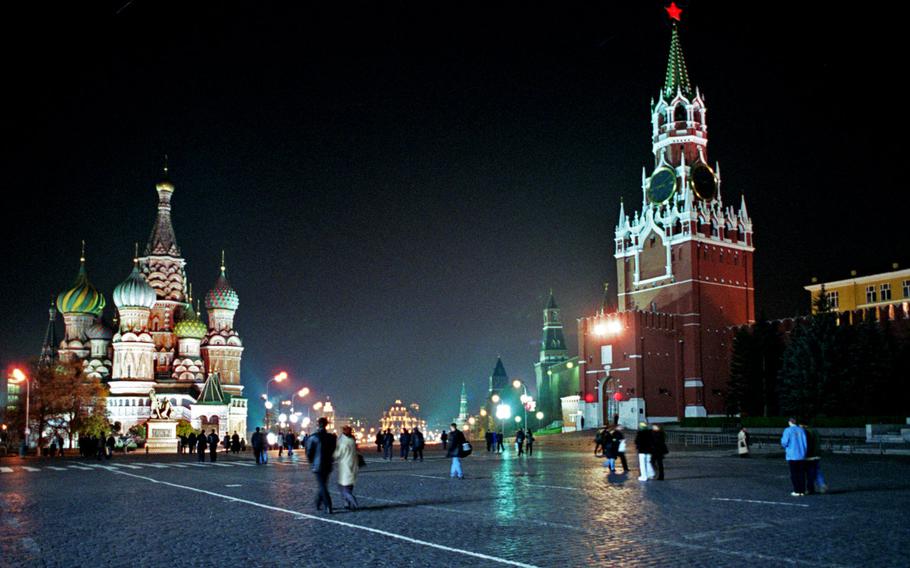 Tourists and Muscovites stroll across Red Square, with St. Basil's Cathedral on the left and the Kremlin with the Spassky tower at right. U.S. European Command confirmed that a directive still stands that advises military personnel to refrain from all non-business travel to Russia unless it is for a family emergency. (Michael Abrams/Stars and Stripes)

STUTTGART, Germany — U.S. troops are advised not to travel to Russia, where a Marine Corps veteran accused of spying has been detained by authorities and where security services have a history of harassing American military personnel visiting on vacation.

U.S. European Command confirmed Thursday that a 2017 directive still stands that advises military personnel to refrain from all non-business travel to Russia unless it is for a family emergency.

The directive goes beyond a December State Department travel advisory for Russia, which tells American travelers to exercise increased caution when visiting the country “due to terrorism, harassment, and the arbitrary enforcement of local laws.”

“U.S. citizens visiting or residing in Russia have been arbitrarily interrogated or detained by Russian officials and may become victims of harassment, mistreatment, and extortion,” the Dec. 10 advisory states. “Russian officials may unreasonably delay U.S. consular assistance to detained U.S. citizens.”

However, military members are advised to avoid the country altogether.

Problems emerged in 2017 with American military personnel getting harassed by Russian security services while traveling to Russia. Among the concerns were servicemembers getting pulled aside for questioning during Russian port stops on holiday cruises, military officials said in August 2017.

About that time, an Army travel advisory stated that: “Except in the case of family emergencies, USDAO (defense attache office) Moscow recommends that all DoD personnel forego unofficial travel to the Russian Federation until further notice.”

Last week, Russia detained Paul Whelan, a former U.S. Marine who received a bad conduct discharge in 2008, in connection with an accusation that he was on a spy mission. Whelan’s family said he was in country for a friend’s wedding and has no connection to U.S. intelligence services.

The detention comes after the arrest of Maria Butina, a Russian gun rights activist who in December pleaded guilty in a U.S. court on one count of conspiring to act as a foreign agent, after she attempted to infiltrate conservative U.S. groups. Butina admitted to working with Russian officials and agreed to work with prosecutors as part of her plea agreement.

Whelan’s arrest has raised additional concerns about travel to Russia, where the former U.S. ambassador to the country cautioned Americans to stay away.

“I often get asked if it’s safe to travel to Russia as a tourist or student. I always used to say yes, and with enthusiasm. After Whelan arrest, however, I will change my advice,” former ambassador to Russia Michael McFaul said on Twitter.