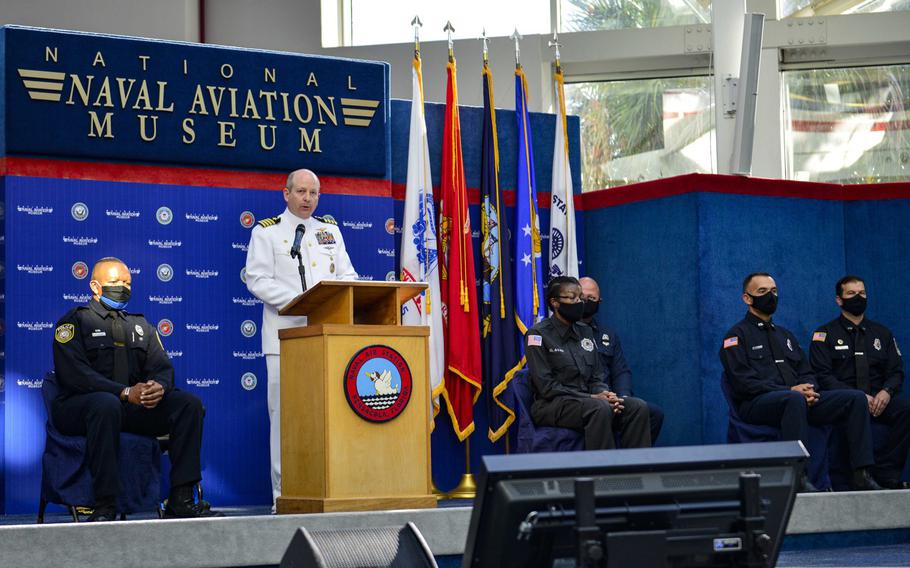 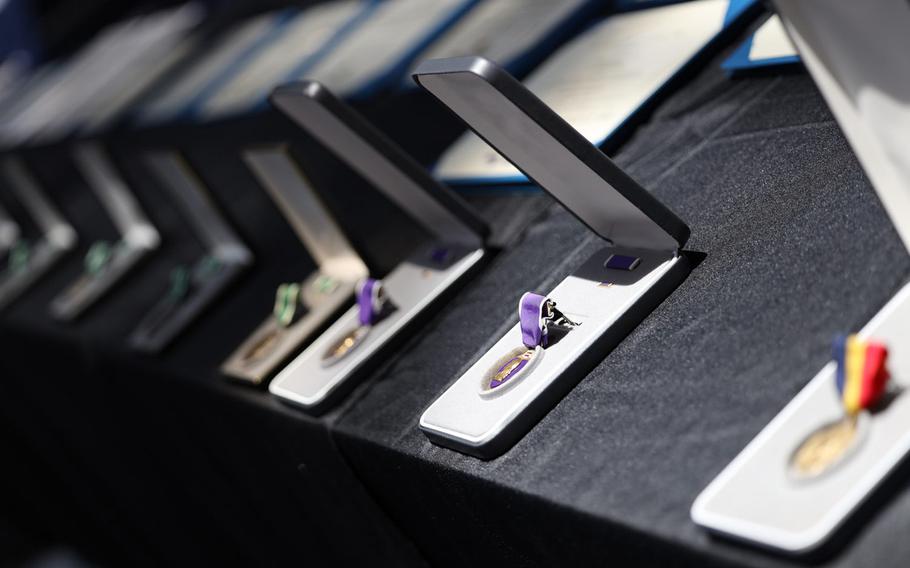 Medals are displayed prior to being awarded to 12 service members and federal employees, who were recognized for their bravery and selflessness during the Dec. 6 shooting at Naval Air Station Pensacola, Fla., June 19, 2020. (Dustin Gautney/U.S. Navy) Ensign Breanna Thomas, left, a student at Naval Aviation Schools Command, receives the Purple Heart and the Navy and Marine Corps Commendation Medal during an awards ceremony held at the National Naval Aviation Museum, June 19, 2020. The ceremony recognized the bravery and selflessness of those service members and federal workers involved in the Dec. 6, 2019 shooting at Naval Air Station Pensacola, Fla. (Dustin Gautney/U.S. Navy) 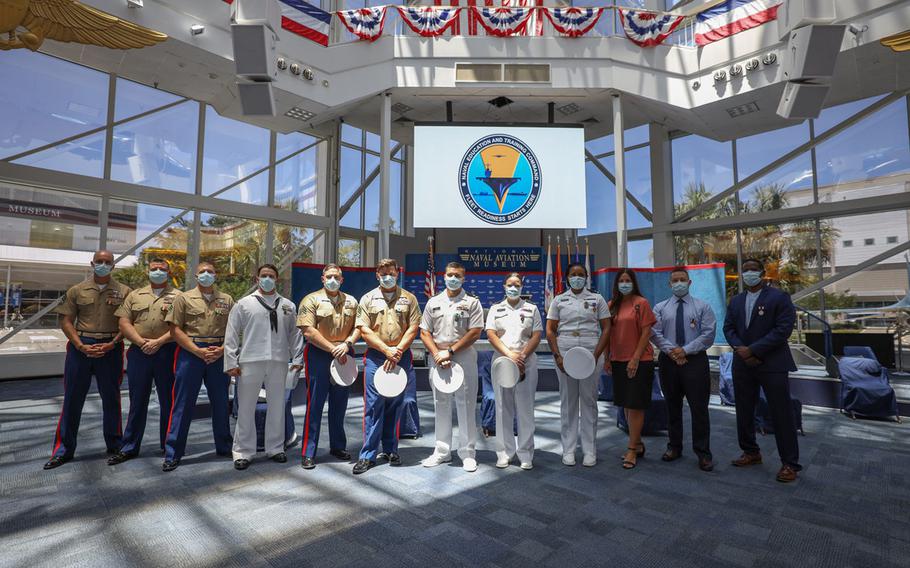 More than two dozen Marines, sailors and civilians have been recognized for their response to a terrorist shooting that left three sailors dead at Florida’s Naval Air Station Pensacola.

A ceremony last Tuesday recognized 13 security and emergency personnel who responded to the Dec. 6 attack in which Saudi Arabian 2nd Lt. Mohammed Alshamrani opened fire in a classroom, the Navy said in a statement. A second ceremony on Friday recognized 12 members of the Naval Aviation Schools Command and Marine Aviation Training Support Group 23, a separate statement said.

“Without hesitation, these brave men and women ran toward untold danger, not knowing if they would return,” Capt. Tim Kinsella, the base’s commanding officer, said of the 13 people honored from NAS Pensacola Navy Security Forces and Fire and Emergency Services Gulf Coast. “They stared pure evil in the face, they stood their ground and they saved lives.”

Rear Adm. Kyle Cozad, head of Naval Education and Training Command, still found it hard to comprehend how the attack, in which eight other people were wounded, could happen at the base, he said Friday, “but it did happen, and I remain in awe at how those we honored here today responded.”

A New York Times review reported lapses at nearly every step of the screening, selection and monitoring program for foreign troops. Alshamrani had two years of contact with al-Qaida leading up to the fatal incident, during which the Saudi trainee was shot and killed by sheriff’s deputies, the report said.

Saudi security services had failed to spot early clues of the shooter’s ideology, the Times reported Sunday. State Department and Pentagon vetting failed to identify a “pattern of troubling social media activity” that linked him with extremist ideology, the newspaper said.

Later, an insider threat program set up by the Pentagon did not monitor his movements and activities after he arrived in the U.S., because he was a foreign trainee, the Times report said.

“I joined the Navy to be a rescue swimmer knowing that one day my number might be called to save someone,” Daniel said in the statement. “I wish it had not been under these circumstances. At the end of the day, I did what I did and I would do it again without skipping a beat.”

“It’s great that we are all being recognized for our actions, but I feel that we did what any other Marine or sailor would do when put in the same situation,” said Staff Sgt. Andrew J. Pfannenstiel, an instructor at MATSG-23, who received the Navy and Marine Corps Commendation Medal for delivering medical supplies and helping others treat the wounded.

“None of them came to work that day expecting to face the unimaginable,” Cozad said. “But they all know firsthand what it means to do what needs to be done in the face of adversity and to sacrifice for each other and our country.”