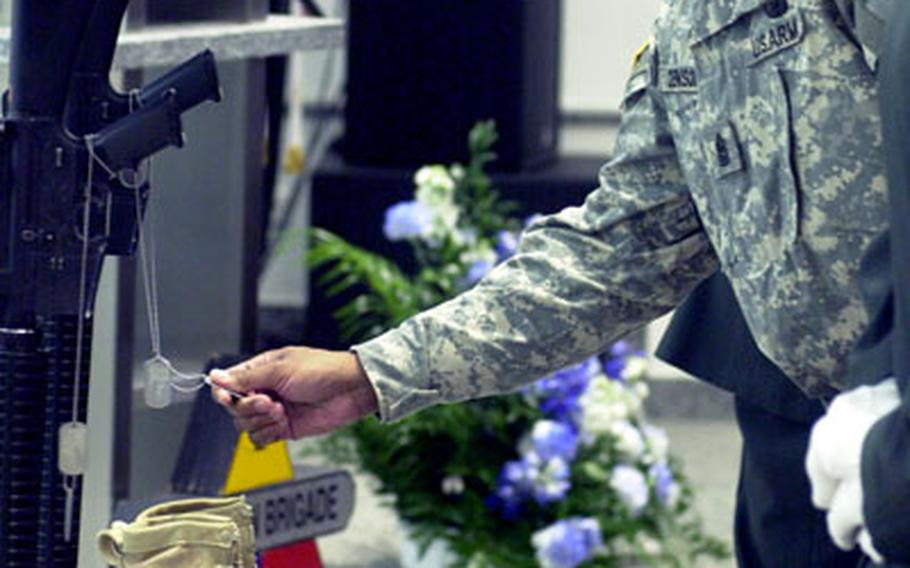 Command Sgt. Maj. Antoine Denson, with Division Artillery, touches the dog tags of Capt. Doug A. DiCenzo and Spc. Robert E. Blair at the end of a memorial service for them Wednesday. (Terry Boyd / S&S)

BAUMHOLDER, Germany &#8212; Their brief lives were very different, but they stood for all that&#8217;s good and brave in Americans. Not just the American way of life, but life lived boldly, life &#8220;with a capital L,&#8221; said Chaplain (Lt. Col.) Matt Woodbery, 2nd Brigade chaplain.

DiCenzo, Company C commander, and Blair, his Humvee gunner, died May 25 in Baghdad when a roadside bomb hit their vehicle.

DiCenzo was a gifted athlete and a natural leader. &#8220;He could have done anything, but he chose to be a soldier,&#8221; said Capt. Marvin King III, who preceded him as Company C commander.

With his talent for leadership, DiCenzo never had to make demands, King said. &#8220;People just followed him naturally.&#8221;

Captain of his football and wrestling teams at Plymouth Regional High School, DiCenzo was also president of the 1995 graduating class, according to media reports. He went to the U.S. Military Academy at West Point, then on to a number of Army courses. He graduated from the arduous Ranger and Airborne schools.

DiCenzo made a big impression at Baumholder. He was an athlete who would bike 16 kilometers to work, then do PT with his soldiers, King said. He was also known for giving everyone a fair shake, he added.

Most of all, DiCenzo looked forward to going home each night to his wife, Nicole, and son, Dakin, King said. &#8220;You could see it in his face. You knew his inner strength came from his family.&#8221;

A slender, low-key man, Blair was tough but gentle. He called himself &#8220;a personal smile trainer,&#8221; said Sgt. Russell Culp, a fellow 2-6 soldier who gave his tribute.

His main passion was rodeo, neck and neck with his love for friends and family, whose family he kept a photo of on his barrack wall.

Blair, a Bradley mechanic, was profiled in Stars and Stripes last August as a novice rodeo rider in whom fellow competitors saw real potential.

In a post-memorial interview, Culp remembered meeting Blair at a rodeo. Thin and rangy, &#8220;he didn&#8217;t look like a cowboy, but he was one of the bravest of the bunch,&#8221; Culp said. &#8220;That first day, he came in pretty beat up from the bull ride, but he was right back out there the next weekend.

Blair won or placed well in a number of European Rodeo Cowboy Association events. However, the young cowboy acknowledged he&#8217;d chosen a particularly perilous hobby, especially considering his line of work, and his words were somewhat prescient.

DiCenzo and Blair both were posthumously awarded the Bronze Star, Purple Heart and Combat Infantry Badge.

DiCenzo is survived by his wife and son; his father, Larry DiCenzo of Charlestown, S.C.; and his mother, Cathy Crane of Plymouth, N.H.

Blair is survived by his father, Allen Blair of Ocala, Fla., and his sister, Charlee Blair of nearby Silver Springs.