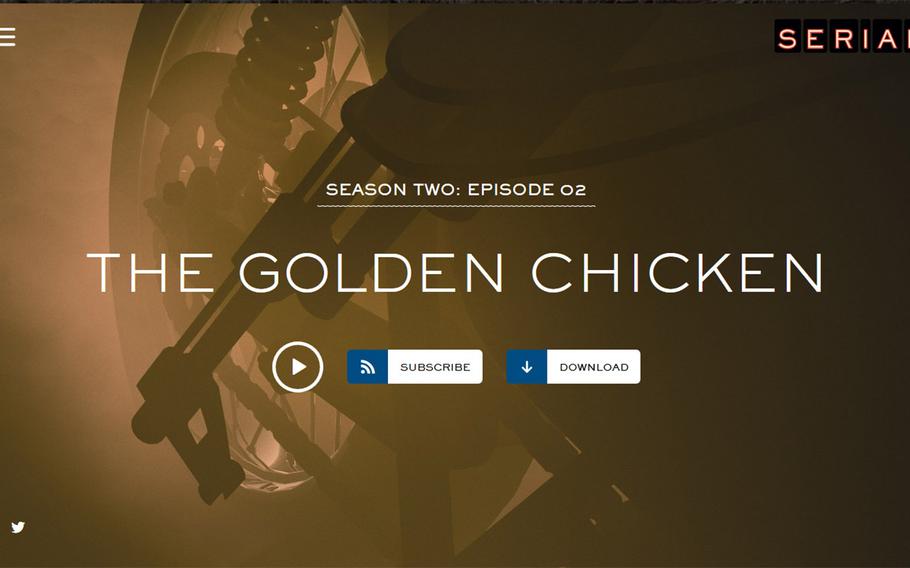 The 'Serial' web page for the second Bowe Bergdahl podcast. ()

The American soldier’s capture was a gift from God to the Taliban, the militants said; he was like “a golden chicken.” They thought so even after 15 of their fighters were killed in a raid by U.S. forces trying their hardest in the summer of 2009 to find Pfc. Bowe Bergdahl.

“Some people are worth more than a thousand men,” a Taliban fighter, told reporters from the “Serial” podcast, which is running a series of episodes about Bergdahl, who walked off his base in Afghanistan, was captured and held by the Taliban for five years, then charged with serious military crimes on his return to the U.S. “He was worth more than maybe 5,000 individuals,” said the fighter, identified as Mujahid Rahman.

Once the Taliban captured him hours after he walked off his post, they did their best to keep him. They moved Bergdahl constantly on the backs of motorcycles to evade U.S. troops who were flooding the region to search for him, kicking in doors sometimes just hours too late.

Although the U.S. wanted Bergdahl back, his fellow soldiers, whose nonstop, dangerous, dirty and dispiriting mission it was to find the soldier they were certain had voluntarily left his post, had little use for him, according to accounts on the podcast.

“If we’d found him, I think a lot of us would have shot him, if that tells you anything,” said Darryl Hanson a platoon mate interviewed for the podcast.

Unlike during the first podcast last week, Bergdahl’s voice is rarely heard. But at the beginning of this week’s episode, Bergdahl — who on Monday was referred to a general court-martial on desertion and misconduct charges that could result in his imprisonment and dishonorable discharge — discusses whether he would consider a plea bargain.

He probably wouldn’t, he explained in a phone conversation recorded some months earlier with movie producer Mark Boal. Then he wouldn’t be able to explain why he’d done what he’d done, and people would continue to hate him, he said. As frightening as it was, Bergdahl told Boal, not being able to explain himself would turn everything he’d done and everything he’d been through “into a really stupid joke.”

In last week’s episode, Bergdahl said he walked off post to inform top commanders of dangerous leadership issues in his unit. He was captured by Taliban fighters on motorcycles out in the open after daybreak, hours after leaving post. The Taliban, interviewed by “Serial” reporters and host Sarah Koenig, said that the soldier had turned up in a nomad’s “koochie” tent and that he’d been told by his soon-to-be captors that they were Afghan police.

To them, Bergdahl was an oddity, obviously “brainless,” and possibly drunk, though they said in fairness they’d never seen a drunk person.

Bergdahl was slapped and pelted with stones, he told Boal. Bergdahl was not interviewed for the podcast, but excerpts from his interview with Boal were broadcast. Bergdahl told Boal in this week’s episode he knew he’d been captured by men who would kill him “just for the amusement of shooting you.” Early on, he tried to bolt but was tackled within seconds.

That Bergdahl was frightened was clear to Rahman, who was in charge of his custody for a time. He couldn’t eat, drink or sleep, the Talib said. But he didn’t feel sorry for Bergdahl because he viewed him as an invader who came to his country to kill Muslims and because he himself had been jailed by Americans at Bagram Air Base for two years and had been treated worse.

At one point, Rahman said, the Taliban fighters did a traditional dance for Bergdahl to raise his spirits and get him to eat. “It did not help,” he said in remarks translated into English.

In the meantime, the U.S. had pulled out all the stops looking for Bergdahl.. More than once, troops arrived at a compound where Bergdahl had been held shortly before. Once, according to the Taliban fighter, they came within 500 meters of U.S. troops while Bergdahl sat on the back of a motorcycle, his hands tied and his face covered.

The podcast explores at length the danger and difficulty of the effort in eastern Afghanistan and beyond. Foot patrols were out for weeks at a time without rest, their clothes rotting off them.

One special forces officer said his team did more than 50 missions searching for Bergdahl, many of them during dangerous daylight hours. Another said that his unit air-assaulted into a booby-trapped compound on scanty intelligence they’d had no time to check, but the explosives failed to go off.

The search pitted the U.S. military — “a big, lumbering machine moving through that can destroy anything face on” yet is unaware of its environment — against a tiny but more nimble foe on its home turf, said Army Maj. Jason Dempsey, who was an operations officer in Afghanistan.

An Army report mentioned on the podcast suggested that the first foot patrols looking for Bergdahl who gave candy to children and asked about a missing American might have tipped off the Afghans to look for him and could have lead to his capture.

The search lasted for at least 45 days, although the U.S. knew that the first 48 hours were critical and that Bergdahl would soon be taken across the border to Pakistan’s tribal areas, where it would be almost impossible for the U.S. to retrieve him, those interviewed said. The longer the search went on, the worse morale got.

Bergdahl, 29, was recovered last year in a prisoner swap that released five Taliban commanders from Guantanamo Bay, Cuba, to Qatar. Both the swap — and Bergdahl — have become lightning rods.

“Those who’ve come into close contact with Bergdahl are ready to forgive him,” Koenig says. “The Army as an institution continues to be furious.”