Sergeants at Misawa get surprise stripes 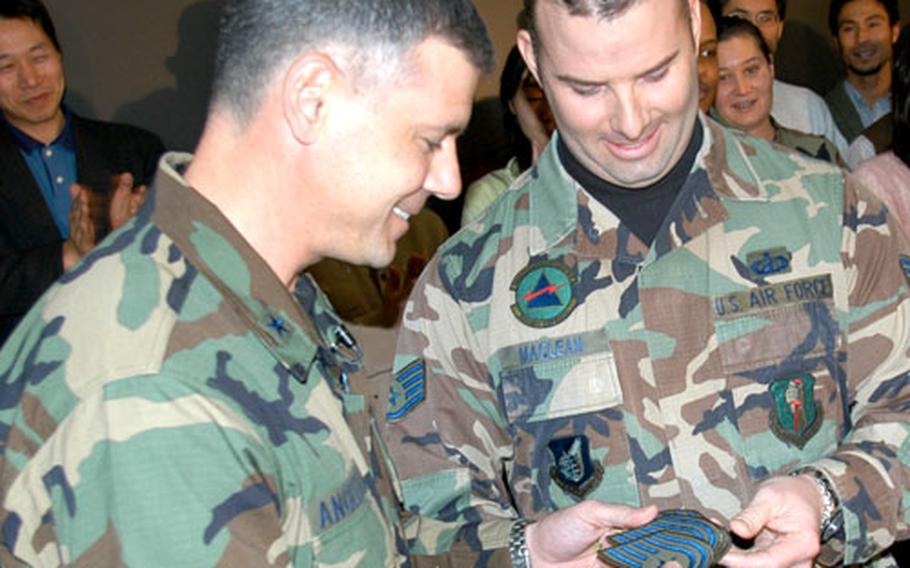 MISAWA AIR BASE, Japan &#8212; The American Forces Network camera crew, the wing commander announced, was in the room to do a story about the joint Japanese-American all-units meeting. It seemed plausible enough &#8212; but it was a ruse.

The Air Force calls it &#8220;Stripes for Exceptional Performers,&#8221; or STEP, for promotion to the ranks of staff sergeant to master sergeant. The program allows wing commanders to promote a select few hard-charging performers who don&#8217;t score well on promotion tests for whatever reason. &#8220;These are very special promotions based solely on merit and individual performance,&#8221; said 35th Fighter Wing Command Chief Master Sgt. Thomas Missel. &#8220;By policy, it&#8217;s pretty much limited to one per career &#8230; it&#8217;s a very high honor.&#8221;

STEP isn&#8217;t intended to promote servicemembers early or &#8220;below the zone,&#8221; Missel explained, but is designed to award hard-working, superior-performing individuals who may have difficulty testing.

The Air Force each year releases a limited number of slots for STEP promotion, usually less than 200. For fiscal 2006, Pacific Air Forces received 47 quotas for STEP promotion, PACAF officials said. The slots are typically then distributed through each numbered PACAF commander to their respective wings based on eligible population.

PACAF officials said earlier last week that so far 13 PACAF individuals had received the promotions: two at PACAF headquarters; four at Kadena Air Base on Okinawa; four at Misawa; two at Andersen Air Force Base, Guam; and one at Hickam Air Force Base, Hawaii.

Misawa&#8217;s 35th Fighter Wing received four quotas: one for master sergeant and three for technical sergeant. Squadron and group commanders nominated candidates and submitted a total of four written packages for master sergeant and eight for technical sergeant. Those were reviewed and scored separately by Angelella, Missel, and vice wing commander Col. Mike Bartley, with the wing commander making the final decision.

MacLean, of 35th Contracting Squadron, and Marcus T. Houston, 35th Medical Group, received their technical sergeant STEP promotions at the same all-units meeting. Houston, 31, was told he was getting a coin.

Missel said Misawa could still get another STEP promotion &#8212; possibly. Both PACAF Commander Gen. Paul Hester and 5th Air Force Commander Lt. Gen. Bruce Wright &#8220;hip-pocketed&#8221; a stripe, so there&#8217;s still more out there to compete for. &#8220;We have forwarded the name of an individual to 5th Air Force to compete for one more stripe,&#8221; he said.