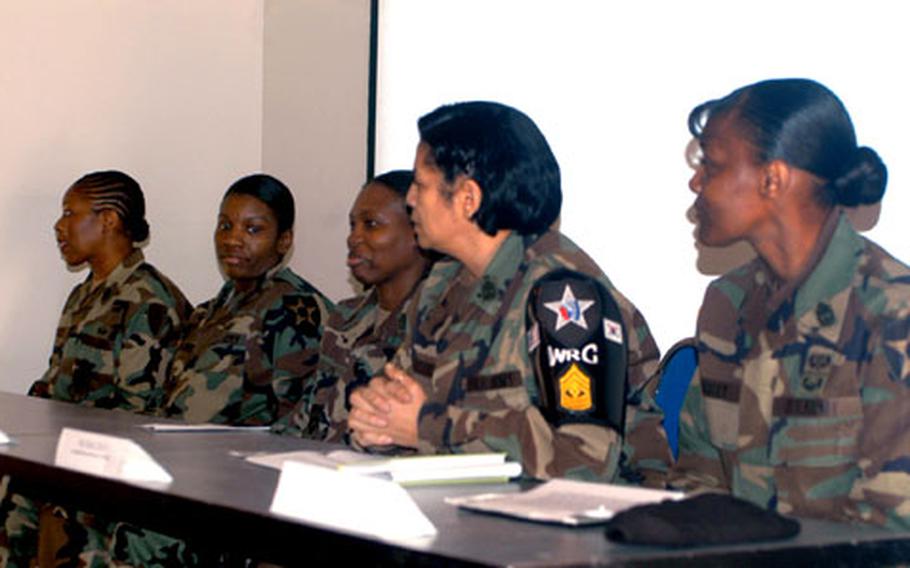 Female first sergeants speak at a Women’s History Month event Thursday at Camp Casey, South Korea. The first sergeants advised young female soldiers to delay having children until they are ready to leave the Army or have established careers. (Seth Robson / S&S)

CAMP CASEY, South Korea &#8212; Female soldiers should avoid having children until they are ready to leave the Army or have established careers, members of a panel of female first sergeants advised troops here Thursday.

Panel members who spoke at a meeting convened by the 177th Finance Battalion to observe Women&#8217;s History Month cited their own mothers as role models, and all but one are mothers themselves.

First Sgt. Mary Maczko joined the Army 21 years ago as a 30-year-old mother of two. The Queens, N.Y., native said it&#8217;s natural for younger soldiers to want to have children.

&#8220;You want to make sure you are able to do what you have to do. A child is an obstacle. There are things you cannot do. It restricts your time,&#8221; she said. &#8220;So think about it. Don&#8217;t have children until you are ready to get out or have really established yourself as a senior NCO (noncommissioned officer).&#8221;

First Sgt. Tommara Ladson of Charleston, S.C., who serves with the 177th Finance Battalion, said she became a single military mother when she was 25.

&#8220;When I had my daughter things were pretty good in the Army. There were not all these deployments. My daughter is 11 and this [tour to South Korea] is the first time I have been separated from her,&#8221; she said.

Ladson said her biggest challenge was when she served in Germany during the Bosnian peacekeeping mission.

&#8220;There were child-care issues. There were some long hard days trying to study. My daughter was two-years-old, but she kept me strong because I had to do it for her,&#8221; she said.

&#8220;For anyone out there who is a mother, I know a lot of times it is hard if you are single. Hopefully you will have family members who will be there for you. If I had to leave my daughter with a stranger it would affect my work,&#8221; she said. &#8220;I have a great family support system. Not everyone has that. I would hope you would have someone close to you that you could ask to look after your kids.&#8221;

She agreed that female soldiers should wait until they are ready to have children.

First Sgt. Henney Hodgkins, who serves with the 4th Chemical Company, said she became a mother after only a year in the Army.

And 2nd Military Police Company 1st Sgt. Carolann Murray of Deland, Fla., said she joined the Army straight out of high school and was pregnant a year later.

&#8220;I had my mom there for me. You have to balance your family life with your military career. You have to put them both on the same level,&#8221; she said.

If all women were removed from the military, it would not survive, she added.