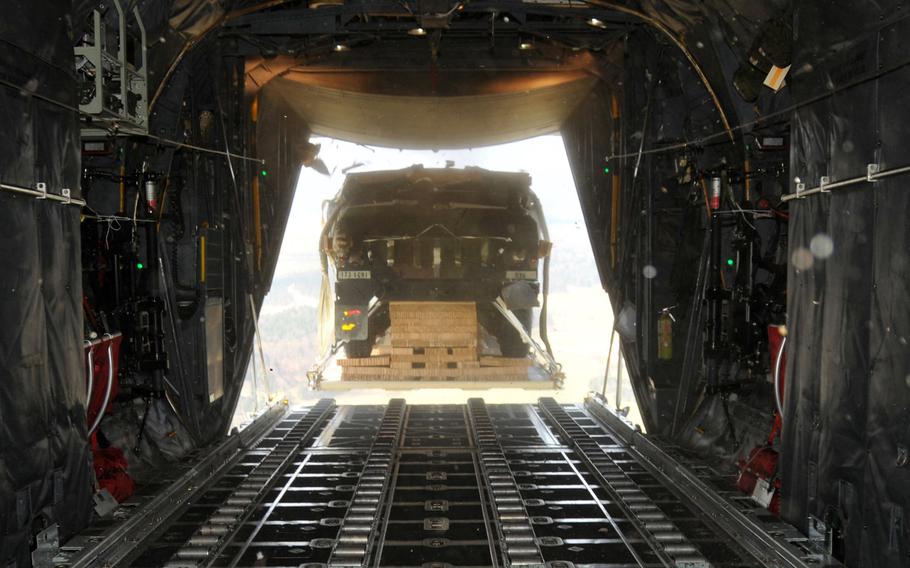 A Humvee is air dropped out of a C-130 Hercules over Hohenfels Training Area, Germany, April 11, 2016. A sergeant with the 173rd Airborne Brigade has been found guilty in connection with the destruction of three Humvees that plummeted to the ground that day. (Andrew J. Park/U.S. Air Force)

A 173rd Airborne Brigade soldier was convicted Wednesday of being responsible for the destruction of three Humvees that plummeted to the earth during a 2016 training exercise, an event captured on video that became an internet sensation and an embarrassment to the Army.

Sgt. John Skipper, 29, was found guilty at court martial in Vilseck, Germany, of destroying military property and giving a false official statement, according to a statement from the 7th Army Training Command, based in Grafenwoehr.

Skipper was sentenced by a military jury to a bad-conduct discharge and reduction in grade to E-1.

Skipper is assigned to B Troop, 1st Squadron, 91st Cavalry Regiment (Airborne) in Grafenwoehr, Germany. The squadron is part of the 173rd Airborne Brigade headquartered in Vicenza, Italy.

Skipper was criminally charged a year ago.

Skipper was the second soldier to be punished in the incident.

A sergeant first class heard laughing and cursing on a video of the Humvees falling from the sky was punished previously. The sergeant, an observer trainer coach assigned to the 7th ATC’s Joint Multinational Readiness Center, was given an administrative letter of reprimand.

The video of the incident has been viewed more than 1.4 million times on YouTube.