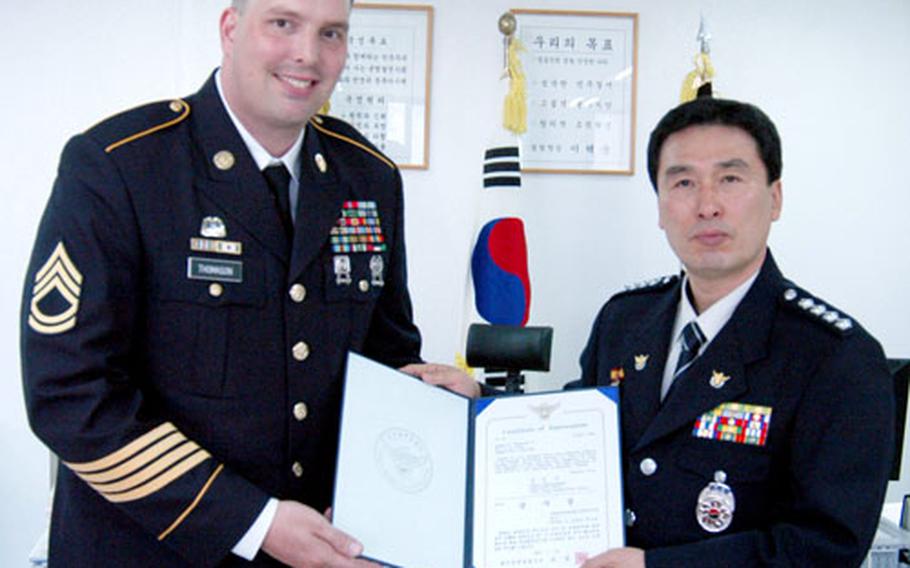 At Nambu police station in Daegu, chief Kim Sang-geun poses with Army Sgt. 1st Class Robert E. Thomason of 19th Sustainment Command (Expeditionary). Police gave Thomason a certificate of appreciation, a watch and money for his brave esponse to a May 13 incident near his off-post residence. (Kim Sang-yun / Courtesy of U.S. Army)

He heard voices of men shouting with excitement.

Thomason, a logistics sergeant with the 19th Sustainment Command (Expeditionary) at Camp Henry, looked outside his fourth-floor window and saw the five guys in their 20s trying their luck at a glass-topped vending machine kept outside a storefront. It&#8217;s loaded with prizes &#8212; MP3 players, digital cameras &#8212; and they had to manipulate levers to snatch one with a small mock crane.

Thomason, 37, was about to ask them to pipe down but decided not to.

One of the men walked toward the machine holding a brick. But a moment later he put it down.

Thomason started back toward bed but within seconds heard glass shatter &#8212; the top of the machine.

After a few minutes, one of the men came skulking down the block from the opposite side of the street, dashed suddenly for the machine, snatched a prize, and ran off.

Thomason had seen enough. He put on his athletic shoes and went downstairs.

Concealing himself, he waited for the man.

When the man came near, Thomason burst into view, all six-feet five-inches and 250 pounds of him.

He grabbed the man&#8217;s shirt. The man spun and tried to use an elbow to break Thomason&#8217;s grasp. Thomason said he put him in a sleeper hold.

&#8220;He came across the street with me.&#8221; Thomason said he relaxed the hold every few moments to keep from hurting the guy.

Two police cars pulled up and cops took the suspect into custody.

Some days later local police invited Thomason to the stationhouse to honor him for his act.

He said he&#8217;d give the money to local charities and would keep the watch and certificate as a reminder.