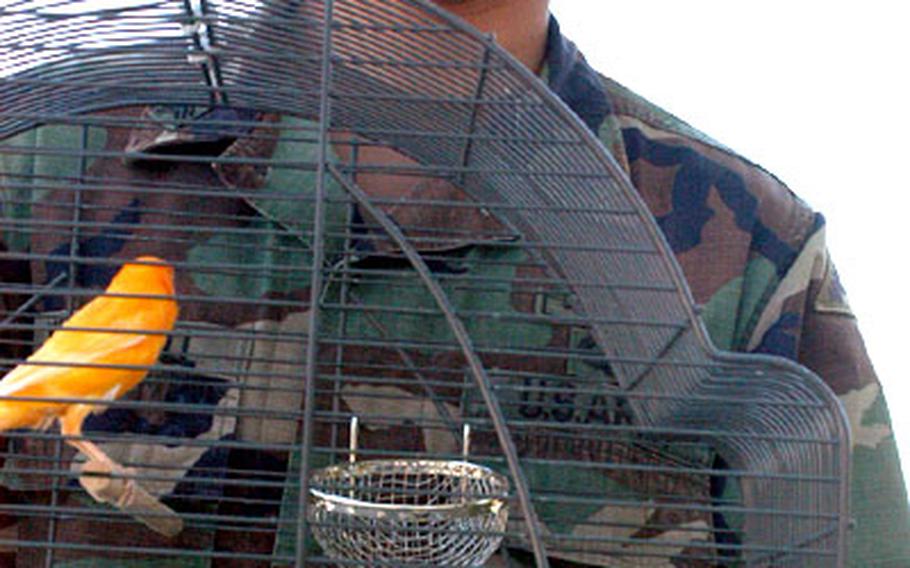 HOHENFELS, Germany &#8212; When workers at the Hohenfels Child Development Center walked outside Wednesday morning and saw a blaze-yellow bird hopping through their playground equipment, they weren&#8217;t sure what to make of it, program assistant Sandra Wornom said.

The tame little bird allowed people to get close, but not too close, and seemed tired and lost, workers at the CDC said.

After a while, it settled on the lawn next to the building, allowing CDC employee Pia Frank to toss a blanket on the bird and scoop it up without a fuss, Frank said Friday.

The capture was the end to the brief but harrowing escape of a pair of domesticated birds that broke out of their cage Tuesday and led their worried owner on a wild canary chase.

The owner, Sgt. Emanual McConnell from Hohenfels&#8217; 1st Battalion, 4th Regiment headquarters company, had come home to find their cage empty Tuesday, a broken birdbath leaving an escape route through the bars, he said. The jailbreak was a tough blow for the sergeant, who said he thought the two canaries wouldn&#8217;t return on their own, and had low odds of survival in the wild.

But after a prayer for his lost pets, he went back outside for one last look before dark, and was surprised to hear the twill of one of the canaries not far from the house, he said. Spotting the blaze-orange male Kentaro, he chased the bird around the post for a half-hour before climbing a tree to catch it, he said.

He had one bird back, he said, and began to build some faith that the other, Mitsumi, would return.

Still, it was a surprise to see a community bulletin just a day later saying that a tame, yellow bird had been caught not far from his home, and its finders were looking for the owner.

By Friday, both birds were back in their cage and singing as if they&#8217;d never left, McConnell said.