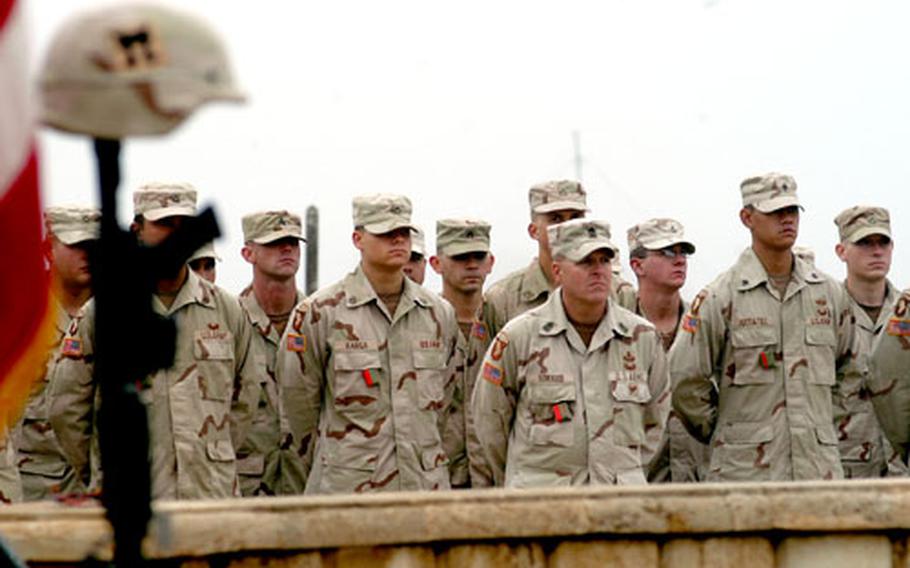 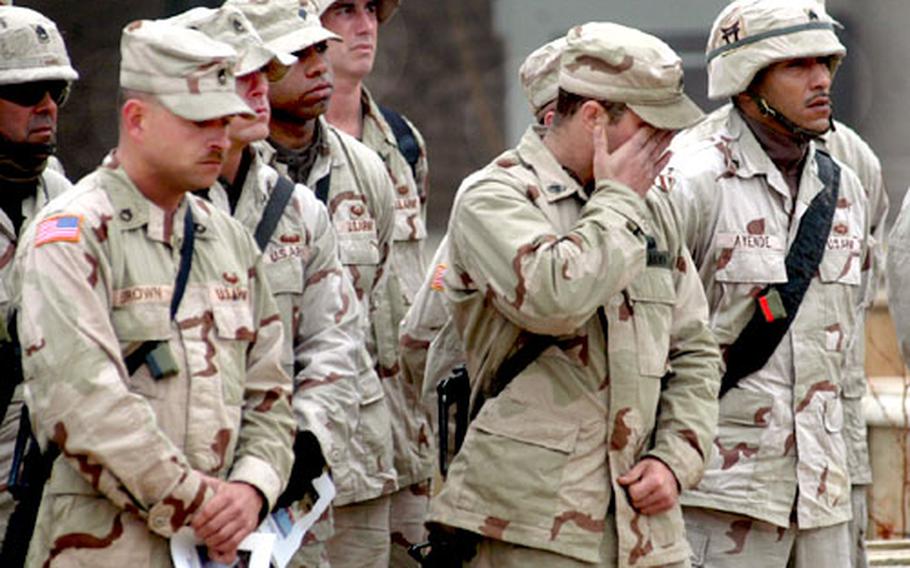 MOSUL, Iraq &#8212; Sgt. Ariel Rico smiled even as water flooded his living space at Camp Eagle. Falling face first into mud while pushing a Humvee didn&#8217;t wipe away his grin, either.

&#8220;I think someone forgot to tell Sgt. Rico that there was an emotion besides happiness,&#8221; said Capt. Steven C. Fahlenkamp at Rico&#8217;s memorial service Tuesday.

Rico, 26, who died Friday after four mortars struck near the Mosul palace, was remembered by buddies as a lighthearted mentor and family man.

About 150 people gathered for the service on a cold, foggy morning outside the palace, the 101st Airborne Division headquarters. Tearful soldiers embraced after filing past the gunner&#8217;s helmet, carbine and boots. Propped against them was a photo of Rico on Thanksgiving, the day before he died.

In February, Rico was assigned to Battery C, 3rd Battalion, 320th Field Artillery Regiment. He requested the assignment to his old battery, which he had first served with in Fort Campbell, Ky., when he joined the military five years ago.

Word spread quickly earlier this year that Rico was heading back to Fort Campbell. Fahlenkamp, the battery commander, said three soldiers in 30 minutes approached him and said, &#8220;Rico&#8217;s coming back. We have to do whatever it takes to get him back in the battery.&#8221;

Minutes before the 11:30 a.m. attack, Howard talked to Rico, who was on his way to get cash. Howard asked Rico to get some for him, too.

Sgt. Michael Deason was stationed at Camp Casey, South Korea, with Rico in 2002.

After his Korea tour, Rico returned to his old battery. &#8220;He wanted to come home; this is a family here,&#8221; said Staff Sgt. Justin Trujillo.

In Mosul, Rico was the 4th section gunner for the battery, the primary guard force for the division&#8217;s headquarters. He was responsible for tower guard, entry control points and the quick reactionary force. He was the first soldier in the &#8220;Red Knights&#8221; battalion to die since the division arrived in Iraq in March.

He is survived by his wife, Jessica, and daughter, Jadelyn, 7.