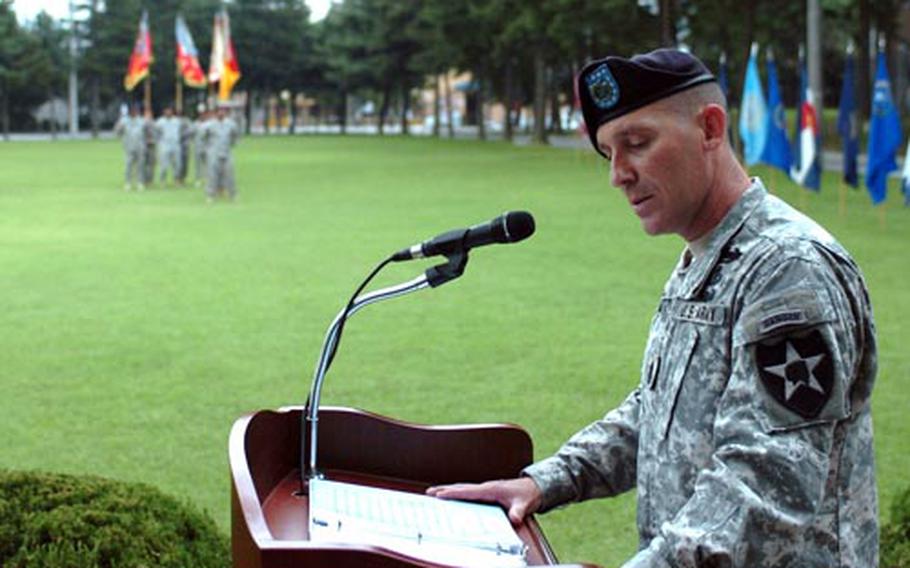 Command Sgt. Maj. Brian Stall speaks during a ceremony relieving him of responsibility for the 2nd Infantry Division on Monday. Stall moves on to Fort Jackson, S.C., where he will be the top enlisted man at a base responsible for training. (U.S. Army)

Command Sgt. Maj. Brian Stall speaks during a ceremony relieving him of responsibility for the 2nd Infantry Division on Monday. Stall moves on to Fort Jackson, S.C., where he will be the top enlisted man at a base responsible for training. (U.S. Army) 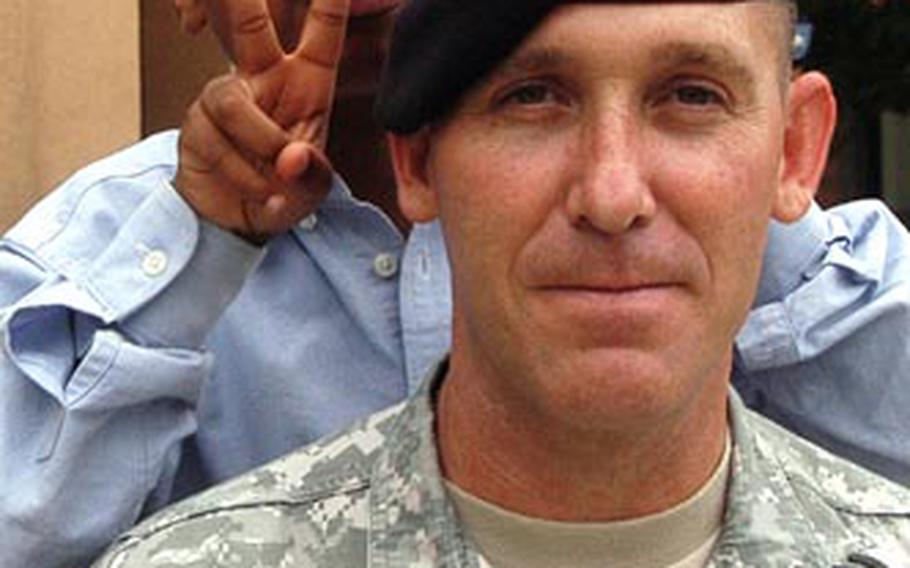 Nor is it a parade field with a grandstand full of dignitaries, as it was at Camp Red Cloud on Monday when he stepped down as the 2nd Infantry Division&#8217;s command sergeant major.

Stall, an Iraq veteran with the 101st Airborne Division, told the crowd of about 150 people that his proudest title is simply that of "soldier."

However, administrative duties and speeches are part of a division sergeant major&#8217;s job, and a look at Stall&#8217;s career shows he is nothing if not adaptable.

Stall went from Army Ranger legal clerk to Ranger infantry instructor, from master parachutist to rifle company first sergeant, and from battalion sergeant major to the top of a division in a little more than 22 years.

Soldiers working close to him say that experience has made Stall a leader with a down-to-earth approach.

McNeely, who has worked for three permanent and two interim 2nd ID sergeants major, says Stall was the best of them and credits him for motivating the noncommissioned officer corps.

Stall is moving on to the Basic Combat Training Center of Excellence at Fort Jackson, S.C., where 70 percent of the Army&#8217;s soldiers go for basic training.

Once he gets acquainted with the new job, he plans to gather input from active units.

Stall says the challenge of the new job motivates him, as did the 2nd ID position when he arrived 22 months ago.

The division&#8217;s constant personnel turnover, oft-delayed plans to relocate to Camp Humphreys, aging infrastructure and abundance of one-year, unaccompanied tours make it a tough assignment in many soldiers&#8217; eyes.

If 2nd ID is going to remain in South Korea as currently planned, it needs longer, accompanied tours for more soldiers so they can bring their families, and it needs the expansion at Camp Humphreys to move forward quickly, Stall said.

"By the time we recognize talented people, they&#8217;re already out the door," Stall said. "2ID needs to set the standard for tour normalization here. The division has the largest footprint on the peninsula, and if we don&#8217;t embrace it, who&#8217;s going to?"

Stall says he made it a priority to improve conditions for his soldiers at bases north of Seoul. Last year, he and former commander Maj. Gen. James Coggin pushed to raise housing allowances to get families out of dilapidated off-post apartments.

Stall also was the man who made sure core soldiering skills remained on 2nd ID&#8217;s agenda. He personally oversaw the soldier and NCO of the year competitions in 2007 and 2008.

During that first year, some of the competitors had a tough time with skills like land navigation when stripped of their gadgets.

Although the winners during that first year were excellent, Stall says, word got out that he expected more. This past year, the competition was noticeably fiercer, he said.

However, Stall&#8217;s respect for time-tested skills doesn&#8217;t mean he&#8217;ll turn away from new training methods in his new position.

He recognizes a pattern among the Army&#8217;s newest recruits that could just as easily sum up his own job progression.