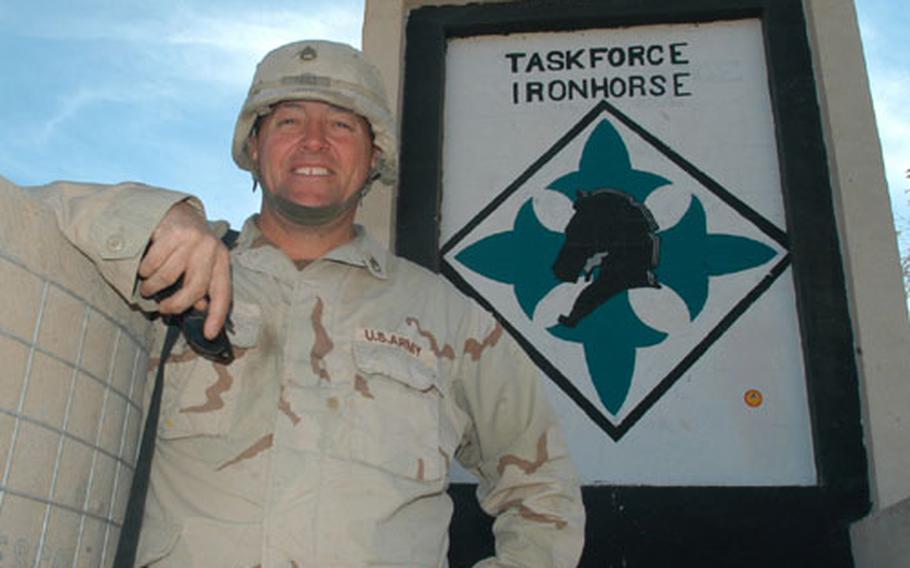 CAMP SPEICHER, Iraq &#8212; Words can&#8217;t describe how much the 404th Aviation Support Battalion has come to depend on Staff Sgt. Robert Fries.

Fries has helped build a more livable life at the 404th&#8217;s battalion area, located around a couple of hardened concrete bunkers on Camp Speicher&#8217;s far northwest side.

The 18-year Army veteran&#8217;s military occupational specialty is utilities equipment repairer, but at Speicher he&#8217;s doing more building, painting and creating than repairing. His tools range from plywood and paint to DVDs and digital cameras.

The results can be seen in the handmade hot showers in the battalion living areas, in the 4th Infantry Division logos painted on the aircraft runways and at the base&#8217;s front gate, and in the personalized DVDs he either gives to soldiers transferring from the unit or sends to the unit&#8217;s family support group at Fort Hood, Texas.

Fries originally enlisted in the mid-1970s and served in Korea as a medic. While assigned to an Army hospital at Yongsan, South Korea, he painted Disney murals in the pediatric wards and nurseries, earning a reputation for painting that&#8217;s followed him throughout his career.

He left active duty after a few years, remained in the Reserves, then returned to active duty in time for the first Gulf War. There, he served with the 3rd Armored Cavalry Regiment as a courier in the Iraqi desert as the allies made their push north from Kuwait and Saudi Arabia.

Fries transferred to the 404th in 1999 and returned to Iraq this year with the unit&#8217;s seemingly safe headquarters and supply company. However, his position as jack-of-all-trades means he regularly travels into nearby Tikrit to shop for the battalion.

But getting attacked by rocket-propelled grenades and improvised explosive devices is all in a day&#8217;s work for Fries, for whom no challenge is too great.

Whatever Evans can dream up for the battalion &#8212; however unusual or seemingly unavailable &#8212; Fries seems to come through.

Every soldier transferring from the unit or getting out of the Army gets a personalized DVD. Fries gives them the battalion&#8217;s video camera, allows them to tape up to 30 minutes of whatever or whomever they want, then edits it into a DVD &#8212; complete with music &#8212; to take with them as they leave.

It&#8217;s all part of making life a little better for the battalion soldiers.