Sergeant gets eight months for shoving soldier into stove 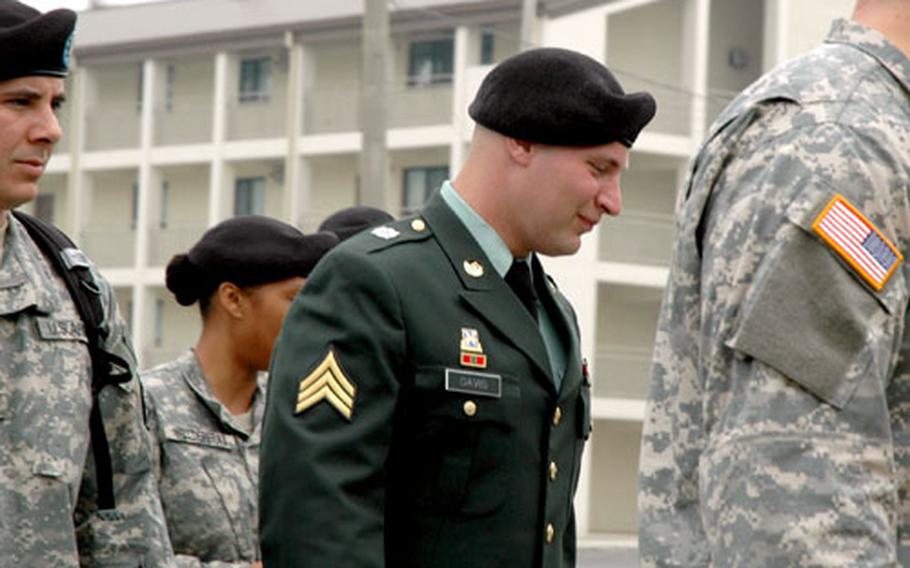 Sgt. Luke S. Davis, middle, is surrounded by friends Thursday morning as he awaits his sentence in a court-martial at Camp Humphreys. (Teri Weaver / S&S)

CAMP HUMPHREYS, South Korea &#8212; Racially charged words and a quick physical response during an early-morning gathering in a barracks dayroom left one soldier with severe burn scars and another soldier with a criminal conviction.

During a court-martial Thursday, Sgt. Luke S. Davis, Company A, 527th Military Intelligence Battalion, was sentenced on one count of maiming to eight months of confinement, partial forfeiture of his pay during that time and reduction to the military&#8217;s lowest rank.

Meanwhile, Pvt. Robert Kim of the same company and unit is anticipating more reconstructive surgery. He suffered second-degree burns over 15 percent of his body during a July confrontation with Davis, according to testimony and court proceedings.

Kim, who is Asian, has been counseled by his chain of command since the July 4 incident for his choice of words, according to court proceedings. Davis, who is white, said it was Kim&#8217;s racially charged story &#8212; which Kim testified was meant as a joke &#8212; that prompted him to lunge for Kim as he stood near a stove with a pan of hot water.

More than a dozen officers and soldiers from Company A sat through the morning&#8217;s trial as Davis admitted he used poor judgment after a night of drinking by letting Kim&#8217;s words provoke him.

Davis, who had pleaded guilty to the maiming charge, had faced a maximum sentence of one year of confinement, reduction to E-1 and a bad conduct discharge. Earlier in the trial, Gross ruled in favor of the defense on a motion to dismiss a second charge of drunk and disorderly conduct.

About 3 a.m. on July 4, Davis and two other soldiers were hanging out in the barracks day room, Davis told Gross. Earlier that night, Davis said, he&#8217;d had about eight to 10 drinks over a seven-hour period.

Kim walked in about 3:30 a.m. to heat up some ramen noodles, Davis told the judge. The other soldiers had been teasing Davis about his body hair, something he told the judge he is very sensitive about.

Kim joined the teasing and said his father had told him white people have more hair than Asians because white people are less evolved, both Davis and Kim recalled in court proceedings.

Davis said he repeatedly asked Kim whether the private was calling him a gorilla, Davis said in court. Kim didn&#8217;t respond to the question and mooned Davis and the other soldiers, Davis told the judge. Davis went for Kim, meaning to push him to the floor or against a wall, both Davis and his lawyer, Capt. Jack Ko, said in court.

Instead, Kim crashed onto the hot stove and water, burning his arm, hand, chest and abdomen, according to court proceedings. Kim looked down and saw his hand was white and shriveled, and part of his jersey was seared into his skin, he testified.

Kim had a two-week stay and one reconstructive surgery in the 121st General Hospital on Yongsan Garrison in Seoul, he testified.

Two senior soldiers testified on Davis&#8217; behalf during sentencing, calling him an excellent soldier with an easygoing attitude.

Gross deliberated for almost an hour before handing down the sentence.