Sergeant finds use for body armor away from war 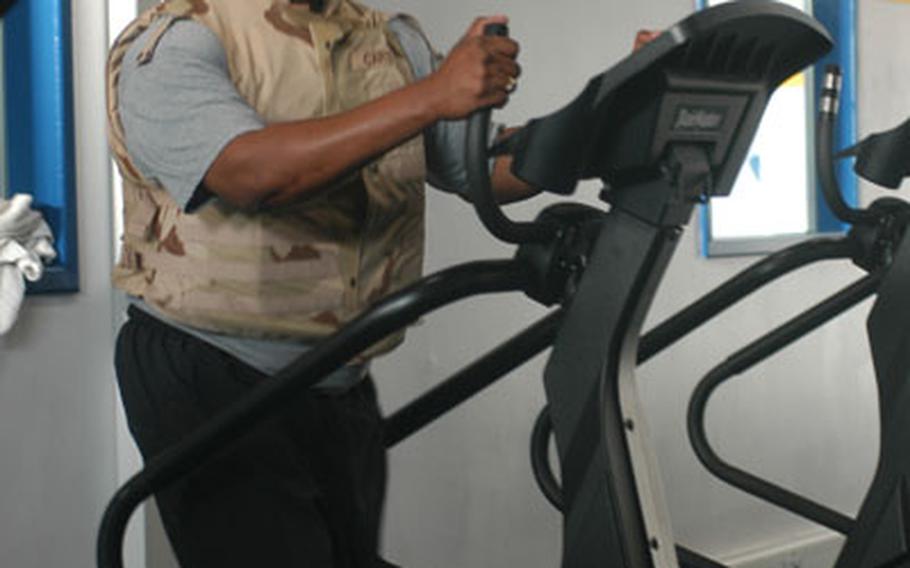 Sgt. 1st Class Algernon Carter never leaves home without his flak vest. He wears it to boost his workouts and says it makes him feel pleasant, even buoyant, when it&#39;s removed. (Nancy Montgomery / S&S)

HEIDELBERG, Germany &#8212; It started in basic training 20 years ago.

That discipline and dedication is one reason why visitors to the gym on Campbell Barracks over the past few months have seen a singular sight: a very muscular 43-year-old, running on the treadmill, riding the bike and sitting in the sauna wearing his IBA &#8212; Interceptor Body Armor &#8212; complete with ceramic plates.

The flak vest workout, started months before an Iraq deployment last year as a way to condition himself to wearing the vest, has become standard for Carter, now a 220-pound sergeant first class assigned to Heidelberg&#8217;s NATO headquarters.

He noticed a captain running on the treadmill wearing his vest, but without the heavy ceramic plates.

But he kept at it, and it paid off when he was at Balad Air Base in Iraq.

In Wiesbaden, Carter said a number of people, especially sergeants major, made fun of him or otherwise engaged him about his workout.

Especially when he wore the vest into the sauna.

But since he was assigned to Heidelberg in April, no one has asked him what he&#8217;s doing or why he&#8217;s wearing a flak vest weighing some 30 pounds in the sauna.

Then he sits in the sauna for a while. He does that three days a week, and is looking forward to a deployment in the next couple of months to Afghanistan.