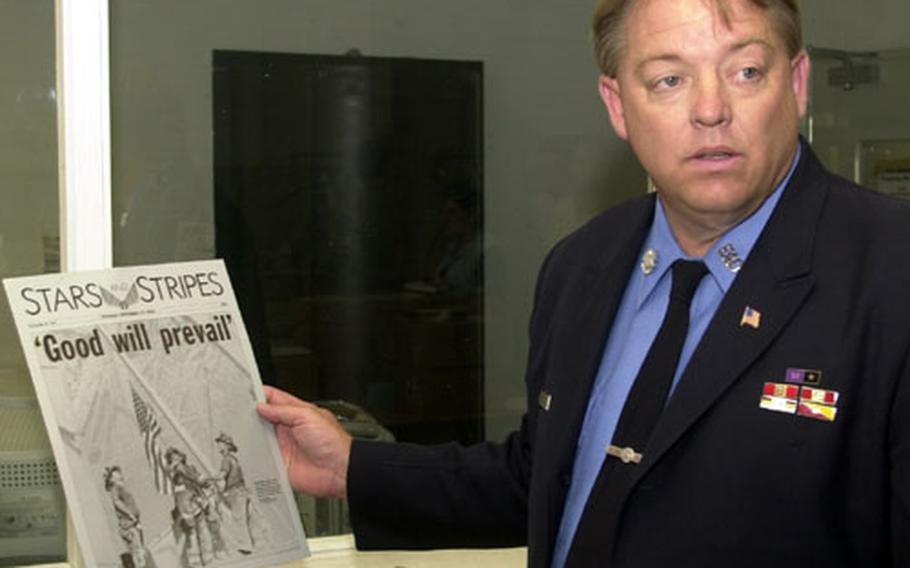 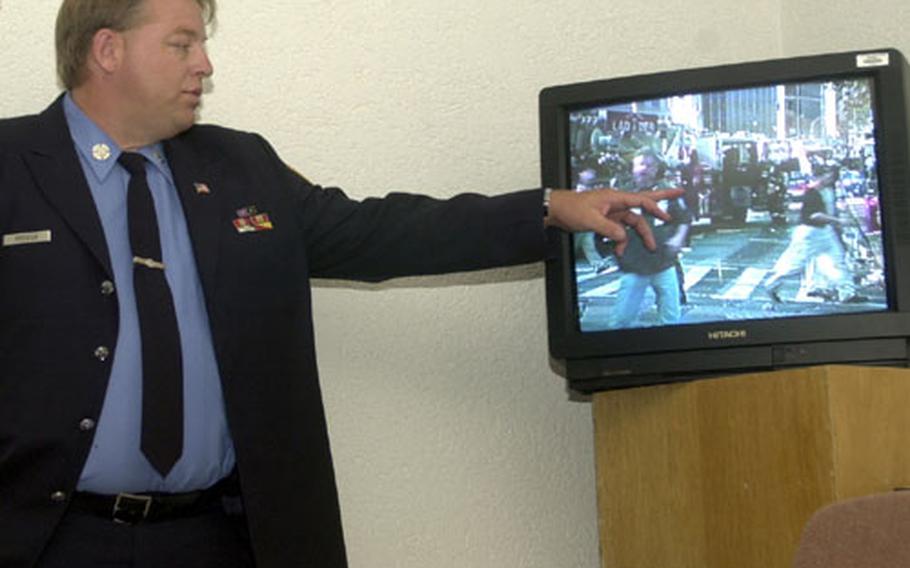 New York City firefighter Ray Pfeifer points to fire trucks on scene at the World Trade Center on September 11th during a speech given to Stars and Stripes employees on Tuesday. (Raymond T. Conway / S&S)

New York City firefighter Ray Pfeifer said he hopes to encourage U.S. servicemembers and their families while he is in Europe.

Pfeifer, who for nine days dug through the World Trade Center rubble after the Sept. 11 attacks, was tabbed to represent his colleagues in the Extreme Summer promotion by U.S. Air Forces in Europe.

The 45-year-old from Hicksville, N.Y., said when he started his tour, he hoped tales of courage from the response to the 2001 attacks would bolster the troops. Instead, Pfeifer said he will return home with stories of American &#8220;heroes&#8221; abroad.

Pfeifer, who on Tuesday visited the Stars and Stripes office in Griesheim, Germany, brought a video that was shot by a cameraman at the base of the Twin Towers after hijacked jets crashed into them.

The video showed the towers burning, emergency workers treating the injured and people stumbling out of the burning towers in a daze.

The video zoomed in on a man waving for help from an upper-floor window before leaping to his death.

Almost two weeks after the attacks, a stranger walked up to Pfeifer as he was sitting outside his station at Amsterdam Avenue and West 66th Street.

Pfeifer said his station decided to not sell the tape to news companies out of respect for those who died. He said he is showing the tape during his tour just to let people &#8220;know what happened that day in New York.&#8221;

Pfeifer said 12 men from his station were among the 343 firefighters who died in the rescue effort.

Pfeifer seemed embarrassed by the attention he was receiving while in Europe. He survived Sept. 11 because he was supposed to have the day off. When he heard that the World Trade Center had been hit by two planes, he rushed into work, arriving at Ground Zero shortly after the second tower had collapsed.

&#8220;I&#8217;m a victim like everybody else. I was there and saw what happened. But now they have me go around and I sign autograph cards.

Pfeifer is scheduled to visit Rhein-Main Air Base, Germany, on Wednesday and RAF Croughton, England, on Thursday. Previous stops have been at air bases in Spain, Italy and Germany.