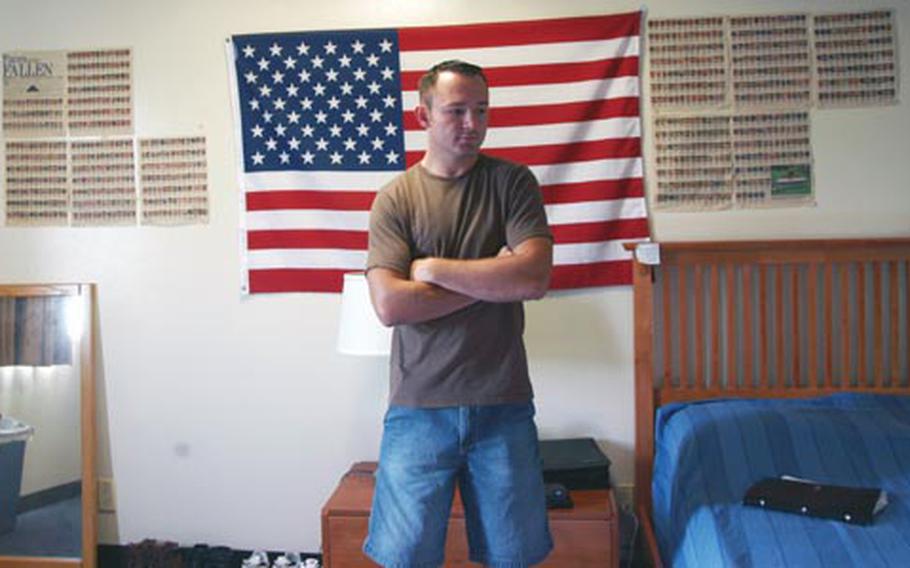 Michael McInerney, 23, is ready to clean out his barracks room at Kadena Air Base, Okinawa, last month as movers pack up his belongings. McInerney, then a senior airman, separated from the Air Force and moved back home to Illinois to become a police officer. (Natasha Lee / S&S)

Michael McInerney says it&#8217;s good to be back in Illinois, with a few exceptions.

"Everything does seem more expensive, especially since I don&#8217;t have income right now," he said in a recent e-mail to Stars and Stripes. "The biggest shock is trying to find health insurance."

McInerney, 23, separated from the Air Force in July to pursue his education and a law enforcement career.

He served with the 18th Munitions Squadron at Kadena Air Base on Okinawa, and attained the rank of senior airman.

McInerney moved back into his parents&#8217; house in Winfield, Ill., and starts classes at College of DuPage next week.

He has a small "nest egg" he plans to use to pay for food and gas while he searches for a job.

McInerney says he&#8217;s missed most of the application deadlines for police departments in his area. He hopes a military career fair in Chicago will provide some leads.

And recently, the Department of Veterans Affairs teamed with Monster.com, a site for job-seekers and employers, to post listings exclusively for veterans.

Stateside career fairs run by employment agencies such as RecruitMilitary and Hiring Heroes, operated by the Defense Department, also cater to veterans.

But that&#8217;s not always enough to calm all the jitters.

In the meantime, McInerney is waiting for his military separation documents that will allow him to qualify for unemployment and for health care through his state&#8217;s veterans program.

It&#8217;s too early to know if leaving the Air Force was the right decision, but McInerney is optimistic.

Not having to pay for rent and utilities, he said, helps alleviate some financial pressure.