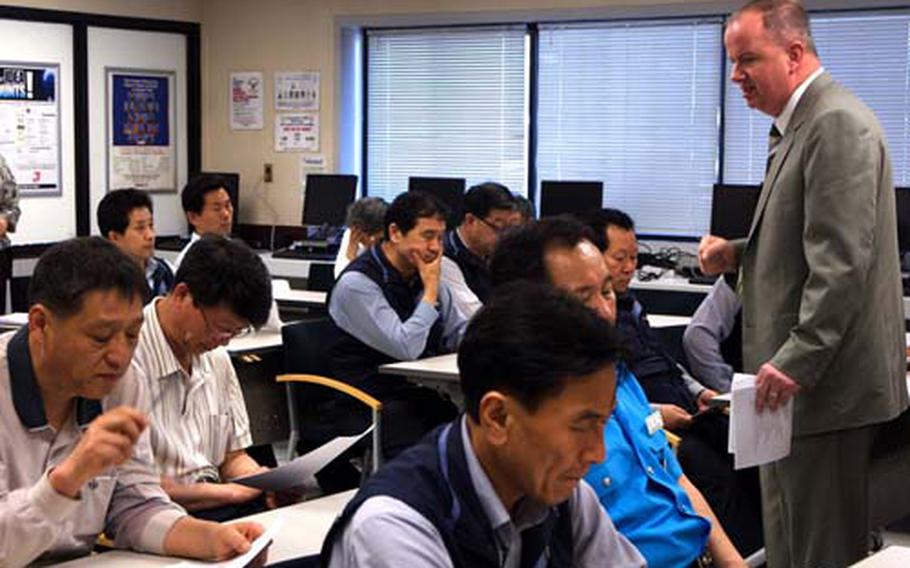 All of the drivers have previously worked in Seoul, where cars are rarely stopped by police for running red lights, changing lanes without signaling, or making U-turns in the street.

"They are used to a different standard downtown as opposed to what we do on the installation &#8212; stopping at crosswalks, (not) speeding and stopping at red lights," said AAFES general manager Shawn Dorcy. "Those are the kind of issues we saw, and see periodically."

More than 200 drivers attended the two-hour training sessions, held Tuesday through Thursday at Yongsan. Many had started work at the garrison within the past year, after the Army and Air Force Exchange Service ended its contract with its primary taxi provider after a lengthy drivers&#8217; strike and hired several new companies.

Dorcy said the classes were prompted partly by customer comments, but were part of an "ongoing initiative" between AAFES and the Department of Emergency Services, which offered the classes several years ago.

"We saw a lot of new drivers come in between May of last year and this year, and realized it was time to go through the same thing again," he said.

Twenty-three of the 170 comments made to AAFES through the online Interactive Customer Evaluation system in the past year were related to taxi service, garrison spokesman Dave McNally said.

Dorcy said the comments included complaints about bad driving and receiving incorrect change when paying in U.S. dollars. The value of the won dropped dramatically last year and continued to fluctuate for several months.

At least eight or nine of those comments were positive remarks about the increased number of taxis on post and the resumption of dispatch service, he said.