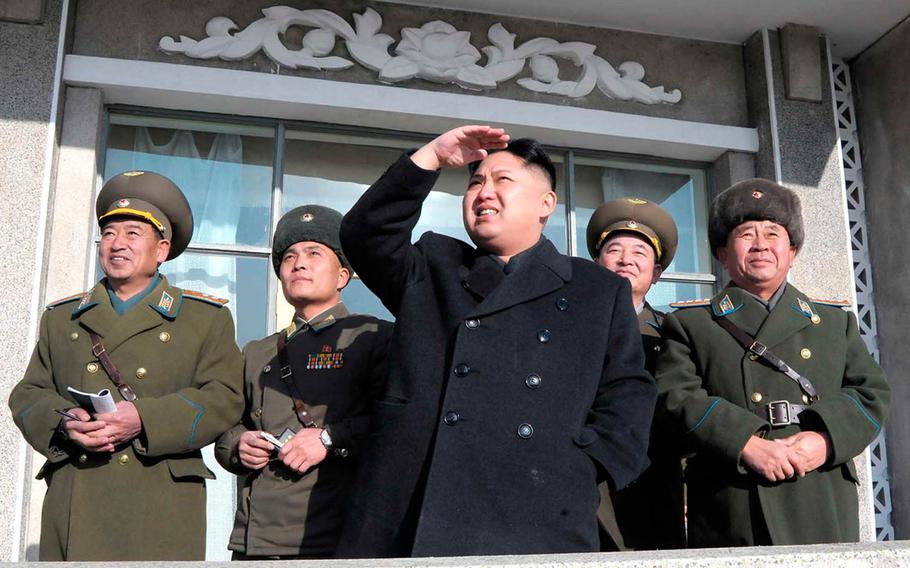 North Korean leader Kim Jong Un is seen with military officials in this undated photo from the Korean Central News Agency. The North carried out its fifth and most powerful nuclear test on Friday, Sept. 9, 2016, the second such blast in eight months. (Courtesy of KCNA)

The North carried out its fifth and most powerful nuclear test Friday, the second such blast in eight months. That has raised fears the communist state is accelerating its efforts to develop a nuclear-tipped missile that could reach the U.S. mainland.

“North Korea has a tunnel where it can conduct an additional nuclear test,” Moon told reporters without providing details.

There is evidence the North has finished new test preparations at a previously unused tunnel at the Punggye-ri nuclear complex, South Korea’s main news agency Yonhap quoted unidentified government officials as saying. The site is where all previous blasts have taken place.

The officials said U.S. and South Korean intelligence agencies have stepped up surveillance of the mountainous area with spy satellites and other means, according to Yonhap.

Friday’s blast was the most powerful since North Korea conducted its first nuclear test a decade ago. It also marked the first time the North conducted two nuclear tests in the same year. Previous blasts occurred in 2006, 2009 and 2013.

Pyongyang boasted that it showed that North Korean scientists can now make warheads small enough to fit on a ballistic missile.

The U.S. and its allies have strongly condemned the test and vowed to tighten economic sanctions against the country. The U.N. Security Council imposed tough new measures against the North in March after the fourth nuclear test and a long-range rocket launch.

On Sunday, North Korea called the latest push for sanctions “highly laughable,” and said it would continue to strengthen its nuclear power. It also mocked President Barack Obama’s strategic patience strategy, saying the policy was “completely worn out.”

U.S. Forces in Korea, meanwhile, postponed a flyover of two supersonic bombers — intended as a show of force — due to unfavorable weather conditions.

The B-1B Lancers, flanked by South Korean and U.S. fighter jets, had been scheduled to fly over Osan Air Base on Monday morning, according to Yonhap. USFK said it would soon provide information about a possible new date.

Experts say the North is likely years away from developing an effective nuclear-tipped intercontinental ballistic missile. But they acknowledge the pace of progress in its weapons programs is troubling.

North Korea is emerging as a major challenge for the next U.S. president, with elections looming in less than two months.

Six-nation negotiations aimed at ending North Korea’s nuclear program in exchange for aid broke down in 2009. The U.S. insists Pyongyang must agree to stop its pursuit of atomic weapons before talks can resume, but that appears increasingly unlikely.

The U.S. special envoy to North Korea met with officials in Seoul Monday. During a visit to Japan on Sunday, Sung Kim said the U.S. will consider unilateral measures in addition to action at the U.N. Security Council, according to media reports. He did not elaborate.