Seoul monument to girls killed by U.S. vehicle is vandalized 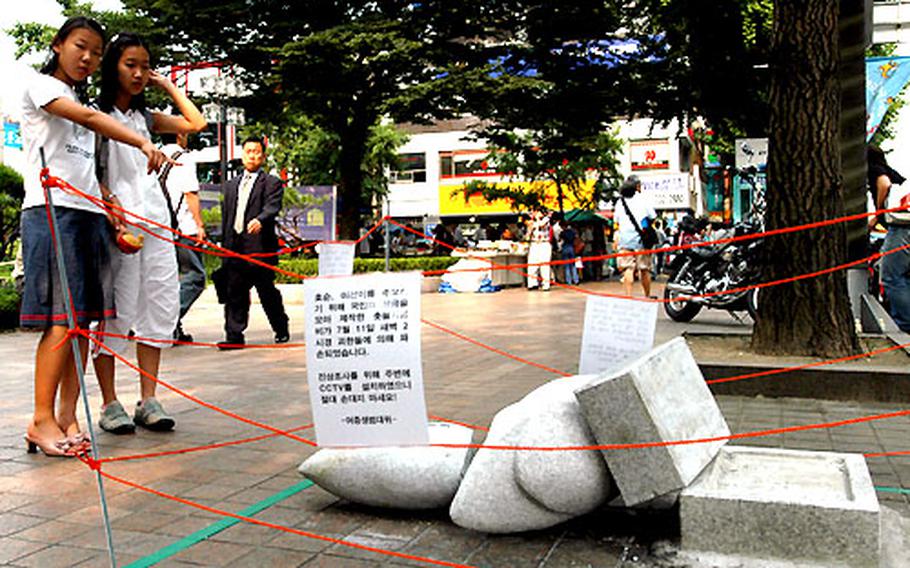 SEOUL &#8212; It sits toppled and broken on the sidewalk of a main street, its intentional damage attracting the stares of passers-by.

Police are investigating Sunday&#8217;s vandalism of the 3-foot tall marble monument, which had a pigeon-shaped carving topped with a candle&#8217;s flame. It now sits broken in two places, flipped on its face and cordoned off with rope.

The monument memorializes the two South Korean schoolgirls killed June 13, 2002, by a U.S. armored vehicle on a country road about 15 miles north of Seoul. Shim Mi-sun and Shin Hyo-soon, both 13, died after they were trampled by a 2nd Infantry Division armored vehicle being driven to a training range.

The incident set off massive protests against U.S. forces in South Korea, and candlelight vigils for the girls were held near the spot where the monument was erected on the accident&#8217;s one-year anniversary.

The Pan Korean Committee for the Two Girls Killed by a U.S. Armored Vehicle placed the memorial on Chongno Street, not far from the U.S. Embassy. Group leaders say it was intentionally vandalized.

But the monument was certainly controversial.

It lies in Chongno-gu, a governing district within Seoul, and was illegally placed, said Kim Ok-dong, who works in the district&#8217;s construction division.

South Korean traffic laws don&#8217;t allow for sidewalk items unless they have a permit, Kim said. Chongno-gu officials had asked the group to remove the monument.

&#8220;Considering public sentiments, it would be hard to coercively put away the monument, but it&#8217;s against the law, so we might give them a fine for not observing the law and give orders if the monument is not gone by this month,&#8221; Kim said.

In a document provided by the Chosun Ilbo &#8212; the largest circulation daily newspaper in South Korea &#8212; to Stars and Stripes, a group called the Civic Group Monitoring Authority claims responsibility for the vandalism. No phone number was on the document, and the group could not been found on the Internet.

After the accident, many civic groups displayed gruesome photos of the trampled girls&#8217; bodies during public demonstrations.

The investigating police officer could not be reached for comment Monday or Tuesday.

The U.S. Army funded a massive monument near the accident site on Highway 56. It sits on a landscaped hill close to the Twin Bridges training area.

Inscribed on the memorial is a message from the U.S. Army. It reads, in part, &#8220;We grieve that you are no longer with us. You have reminded us all of the value of human dignity. We promise that you will not be forgotten. We dedicate this memorial as a lasting symbol of our respect. May you rest in peace, Officers and Soldiers of the 2nd Infantry Division.&#8221;