Seoul getting tough on drivers in bid to control gridlock 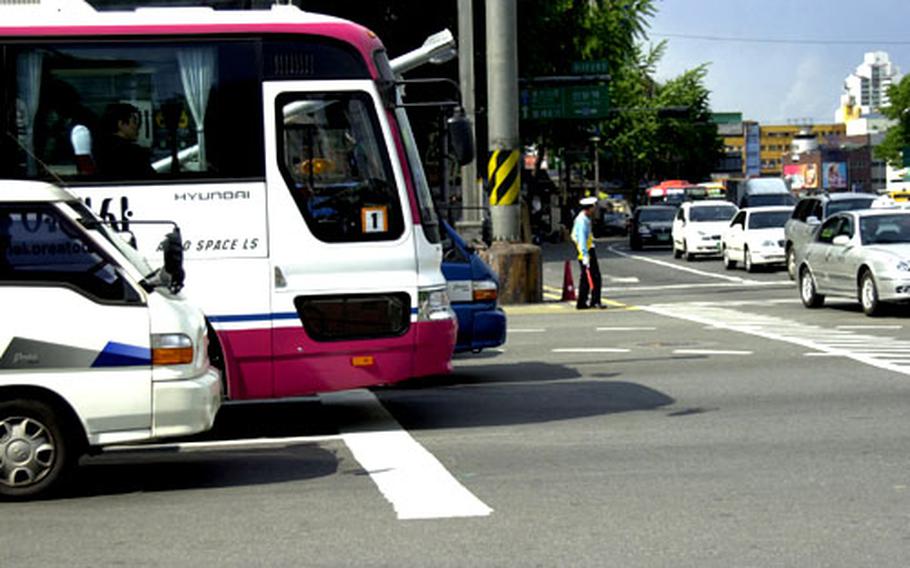 Beginning June 1, if your vehicle is over the white line at an intersection in Seoul, you will face an immediate fine. (Jennifer Kleckner / S&S)

SEOUL &#8212; Believe it or not, Seoul officials are threatening to get tough with traffic enforcement.

Beginning June 1, officials said this week, traffic cops will enforce strictly all those pesky driving rules &#8212; stopping for red lights, staying in lanes, for instance &#8212; that most drivers in South Korea appear to ignore.

And police say they will add a new law to try to prevent drivers from clogging intersections and piling traffic trying to move the other way.

According to Seoul Transportation Bureau officials, after June 1, drivers who go beyond the white stop line at intersections and crosswalks on a red light will be fined on the spot.

&#8220;These new laws will be treated like all other traffic violations and foreigners are no exception,&#8221; said a traffic cop at the Jongno Police Station in Seoul.

Moped and motorcycle delivery drivers are notorious for weaving in and out of traffic, shooting through red lights and cutting off larger vehicles from out of nowhere.

But it&#8217;s not just the two-wheeled vehicles that contribute to Seoul&#8217;s notorious traffic headaches, officials said.

Car and truck drivers routinely change lanes at whim, cut off other vehicles or try to squeeze into intersections after traffic lights have turned red, blocking traffic moving in the other direction.

More often than not, it appears, police standing on street corners with orange batons are ignored.

According to the Korea Transport Institute, part of the South Korean Transportation Ministry, traffic jams here cost drivers about $13.6 billion a year in wasted fuel and time.

The South Korean government has tried several traffic control programs in the past.

During the 1988 Seoul Olympics, traffic congestion was eliminated by an odd-even driving system.

Vehicles with license plate numbers ending in an even digit were allowed on streets only on even-numbered days.

Those with license numbers ending in an odd digit were allowed on streets only on odd-numbered days.

The plan worked and, when the Olympics ended, public opinion surveys showed that more than 80 percent of drivers favored making the system permanent. The government, however, canceled it.

During the Persian Gulf War, when South Korean officials feared oil imports might be curtailed, another system based on license numbers was enforced. Vehicles could not be driven every 10th day.

That system still is in effect for Seoul city government employees but not for the general public.