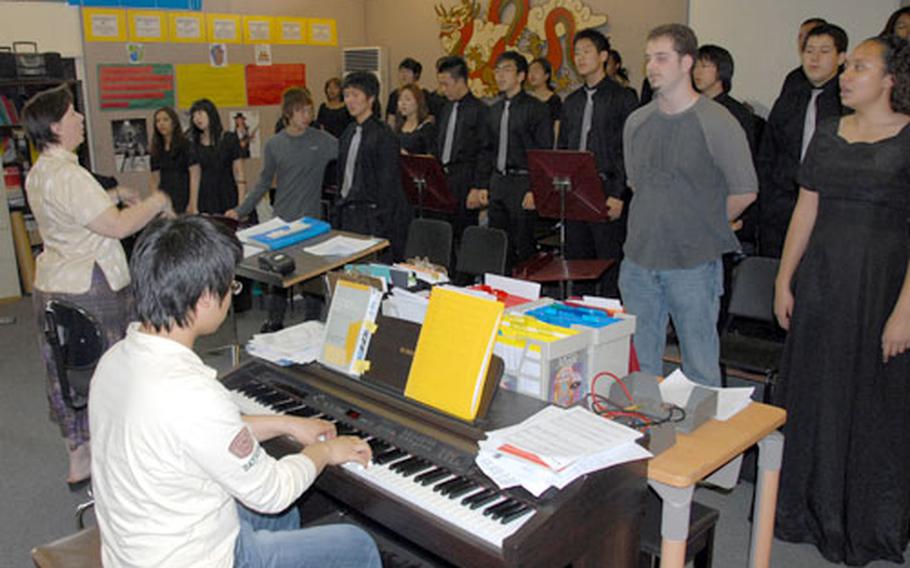 Seoul American High School has brought the sweet sound of success to the Far East Music Festival in Japan this week.

SAHS music program students grabbed about one-third of the 180 slots at the annual music festival featuring the best in the Department of Defense Dependents Schools in the Pacific. They will practice with their peers before performing a jazz band concert on Thursday and an overall concert on Friday.

The school&#8217;s choir director, Lisa Riehle, and Irene Lee, director of instrumental music, say the students did so well because of the hard work they put into the process. For some, it&#8217;s been a yearslong journey.

&#8220;It&#8217;s easy to say these kids are highly motivated and rise to challenges here when you give them a hard task,&#8221; Riehle said last week in Seoul before flying to Yokota over the weekend.

Riehle, who has taught in such places as Cuba and Germany, said the Korean culture stresses music education.

She also pointed out that many of her students are Korean-American and grew up with music and voice lessons.

Lee said many of the kids set the goal of making the Far East event, something she compares to an &#8220;all-State or regional&#8221; music competition.

She said one student &#8212; whom she didn&#8217;t want to name &#8212; received a college acceptance letter that pointed out her participation in the festival as one of the accomplishments that got her into the school because it showed a well-rounded incoming student.

The students earned their Far East spots by submitting audition tapes that are judged by professional musicians, Lee said. She said that process is much easier now that all the DODDS schools are using the same state-of-the-art computer programs.

Riehle compared those auditions to the normal Far East sporting events, but stressed that now the competition is over for the kids.

Their &#8220;championship&#8221; is learning to work together to put on the concerts at Yokota, Riehle said.