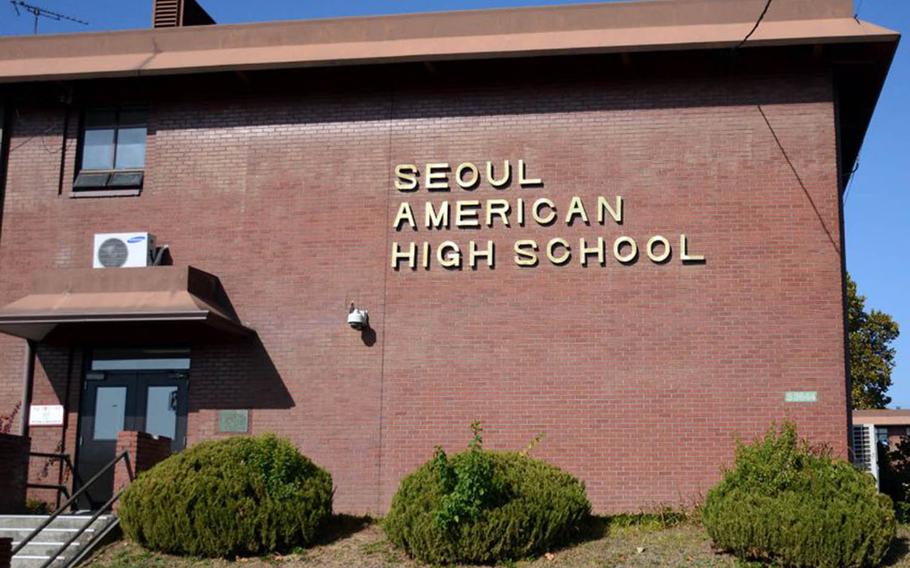 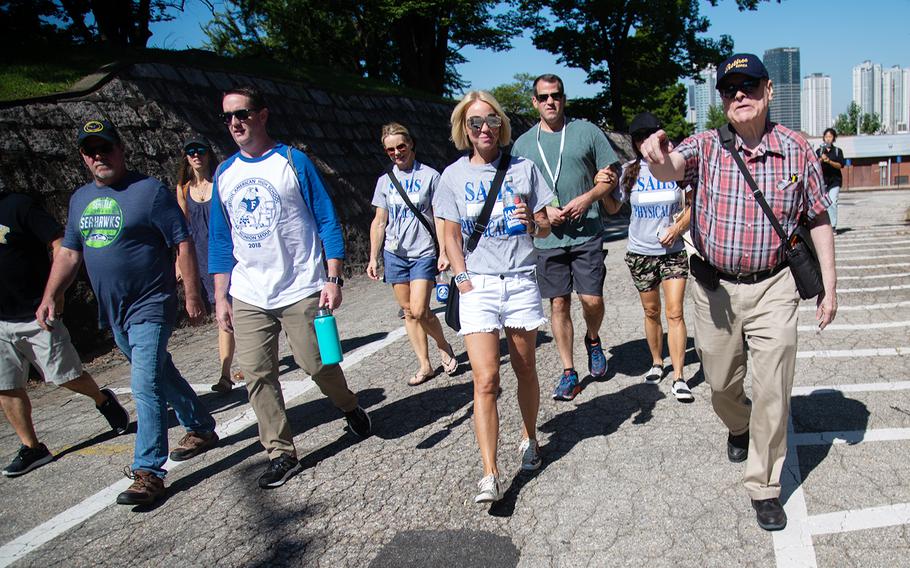 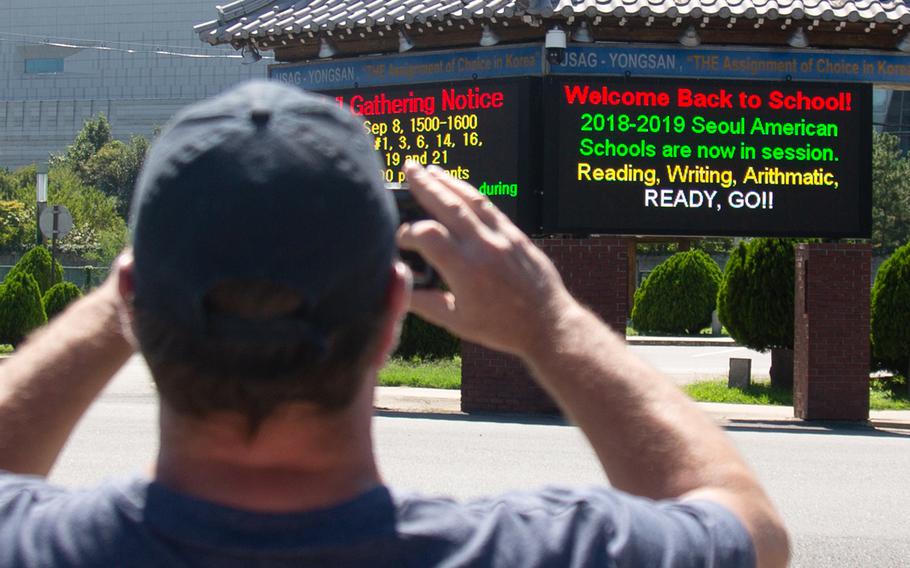 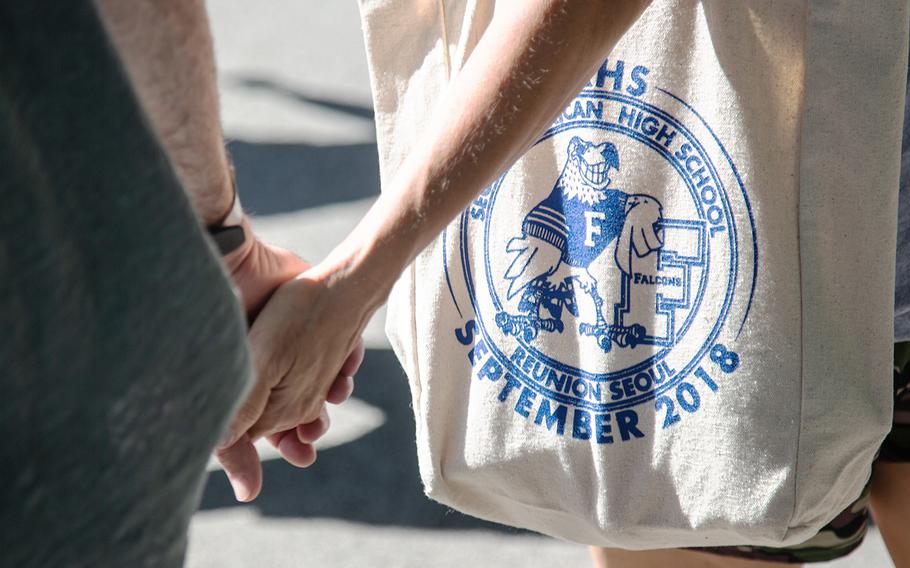 YONGSAN GARRISON, South Korea — Former Seoul American High School students remembered tear gas and discos as they gathered this month for a reunion that brought together representatives of classes from 1965 to 2003 on the main U.S. military base in the South Korean capital.

The 10-day homecoming, which began Sept. 6, drew more than 130 alumni to get a glimpse of their former stomping grounds before the Army garrison school closes as part of the long-delayed relocation of most U.S. forces south of Seoul.

Robin Herget, who graduated in 1986, traveled from Chicago for the reunion. She went to school for six years in two separate stints on the base when her father, an Army pilot and U.S. Embassy defense attache, was deployed here.

“That was a lot of time to spend here so this is a pretty influential place for me,” Herget, 50, said Sunday during a guided walking tour of Yongsan’s South Post. “We took it for granted and didn’t appreciate it, but this was a really cool opportunity as a kid to get to experience all of this.”

She traveled around the region as a cheerleader for football games and said the kids often partied at fancy hotel clubs and discos in the city. Back on base, she and her then-boyfriend, the captain of the football team, were homecoming king and queen. “It was total Americana,” she said.

Shortly after World War II, the U.S. military established schools in Europe and the Pacific to ensure an American education for the children of troops deployed overseas. SAHS opened in 1959 when classes were held in Quonset huts. The two-story, brick building that houses the current school was completed in 1982.

Enrollment has dropped sharply along with the base’s overall population after the two main commands — U.S. Forces Korea and the Eighth Army — moved to a newly expanded Camp Humphreys, 40 miles south of Seoul.

The upper classes were combined this year into a Seoul American Middle High School. No date for closure has been set and the garrison is expected to remain in U.S. hands for at least another two years.

The reunion-goers, who stayed at Dragon Hill Lodge — a military resort-style hotel across the street from the high school — remembered SAHS as they enjoyed banquets, sightseeing, old friends and memories.

The reunion was organized by former students and the Yongsan Legacy Project, a private initiative to record the history of the base.

Chris Walters, 53, of Fairbanks, Alaska, remembered a bullet coming through the window of a classroom in the old school, which was near a shooting range. But he said his experience going to seventh through 10th grades on Yongsan was invaluable.

“How many people in the United States can say they went to school in Korea?” he said, adding that life in the military provided a sense of community even though his education was scattered. “Our group is so versatile. It’s a common bond that we all have.”

Their experiences also spanned South Korea’s history as it morphed from a devastated, impoverished city after the 1950-53 Korean War to an Asian metropolis, with skyscrapers towering over the walled-off base. “All that in the background wasn’t there,” Herget said as she looked at the city’s modern skyline.

David Beard, 50, of Glendale, Ariz., went to SAHS for two years but graduated in Iceland. He said his mother took his younger sister to the Seoul International School where she taught, occasionally running into anti-government protests as South Korean students fought for democracy in the early 1980s. “The students would demonstrate, so the riot police would come out there and drop the tear gas,” he said.

The alumni got a taste of current politics Saturday as they returned from a tour of the truce village of Panmunjom and the Demilitarized Zone that divides the peninsula to find a small group of anti-U.S. protesters staging a sit-in outside the gate closest to Dragon Hill Lodge.

The group had cut-outs of Defense Secretary Jim Mattis and National Security Adviser John Bolton hung in effigy but otherwise limited their activity to singing and dancing as the Americans filed past them onto the base.

Hundreds of pro-American demonstrators marched through the area later, reflecting the fact that polls show that most South Koreans support the longstanding alliance with the United States.

Thousands of U.S. troops have been based in the South since the war ended in an armistice instead of a peace treaty.

Beard noted that Yongsan seemed almost like a ghost town Sunday during the tour led by John Nowell, a military veteran who has lived in South Korea for more than 50 years and has had four children graduate from the Yongsan school system.

“There was always something going on on the base, kids and soldiers walking around all the time,” Beard said. “But it’s not very crowded now.”