Senior enlisted in Naples finding out what’s on sailors’ minds 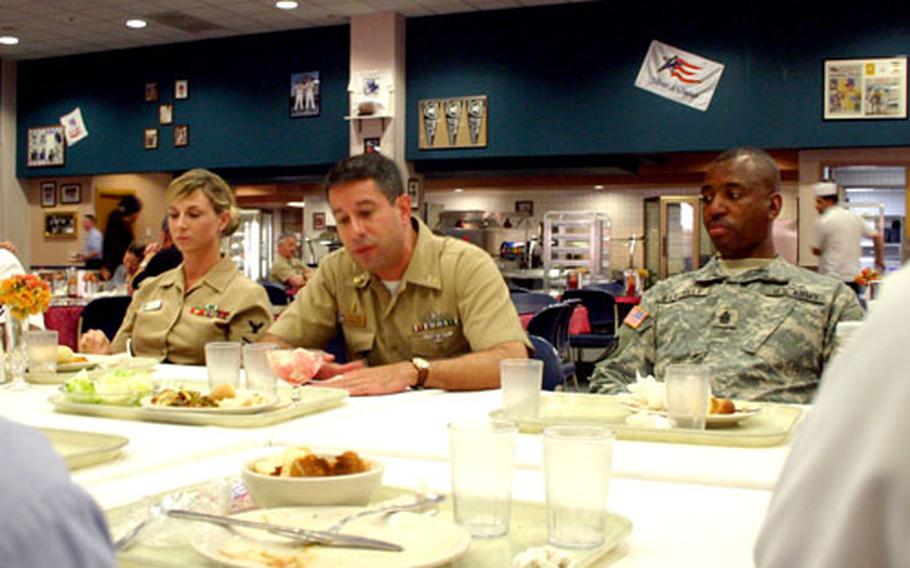 During a luncheon Wednesday with Army Command Sgt. Maj. Michael Bartelle, accompanied by Master Chief Anthony Evangelista, fleet master chief for U.S. Naval Forces Europe/6th Fleet, Little and 14 other sailors asked for, and offered up, opinions on a variety of issues.

As a fellow black serviceman, Little wanted Bartelle&#8217;s opinion on recruiting ads that target racial groups. Bartelle said he approves, as long as the ads are done tastefully. The military is paying the advertising agencies to deliver a product, he said.

Little asked Bartelle and Evangelista to clear up rumors surrounding Naval Station Rota, Spain. &#8220;What&#8217;s the story with that place? Are we closing it?&#8221;

&#8220;What Rota has is excess capacity,&#8221; Evangelista said, but stressed it is strategically located to augment many U.S. military missions and won&#8217;t be closed.

Bartelle is spending three days at Naval Support Activity Naples to &#8220;get an idea of where the transformation process is [and] to speak with the fleet master chief to find out what the issues are,&#8221; he said in an interview.

He gave the sailors a synopsis of European Command&#8217;s push east and south &#8212; meaning a heavier concentration and U.S. presence into former Eastern Bloc countries and into Africa.

As a hospital corpsman who has been deployed to Iraq, Afghanistan and Djibouti, Petty Officer 3rd Class Ray Price said he was pleased to hear Bartelle say EUCOM stresses mental health for troops returning from combat.

When he returned from Iraq after serving seven months attached to an East Coast Marine Corps unit, Price said there was no follow-up to the postdeployment health survey, and when he complained about feeling stressed, was advised to seek counseling through the chaplain&#8217;s corps.

Bartelle recommended servicemembers keep watch over their buddies because they know best what one person&#8217;s normal behavior is like. Watch over the person who just returned from a war zone and goes out and buys a fast motorcycle, he said as an example. Offer help to the member who starts heavily drinking alcohol.