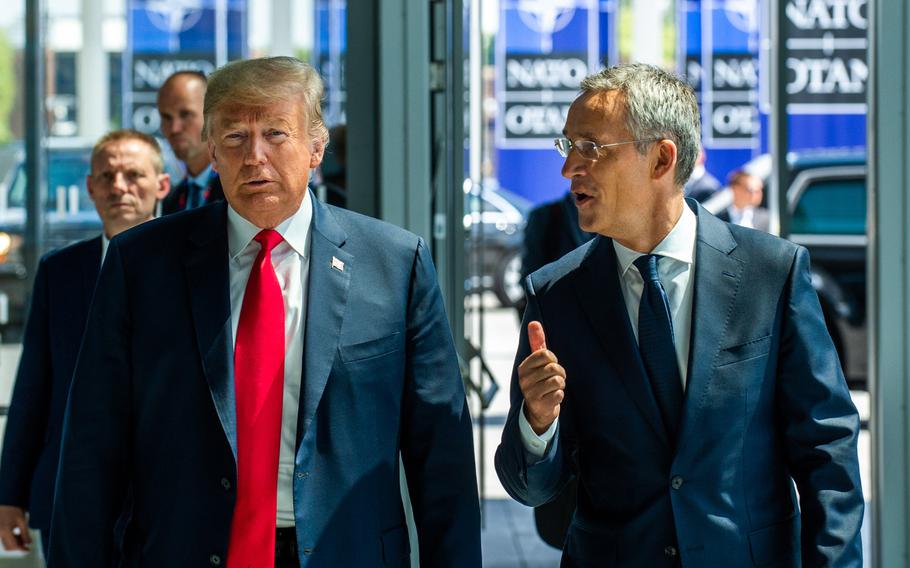 President Donald Trump walks with NATO Secretary-General Jens Stoltenberg at the opening of the NATO summit at the organization's headquarters in Brussels in July 2018. (Courtesy of NATO)

A bipartisan group of lawmakers reintroduced legislation Thursday that seeks to prohibit President Donald Trump from quitting the NATO alliance amid fresh concerns about the president’s commitment to the 70-year-old military pact.

The bill, with sponsors that include Sen. Lindsey Graham, R-S.C., and Sen. Tim Kaine, D-Va., would require Trump to gain Senate approval before terminating support of NATO. At a time of fierce partisan divisions in Washington, the U.S. commitment to NATO remains one of the few issues where there is broad bipartisan backing.

“NATO is more important than ever with Russia’s growing subversive activities in the region and beyond,” Florida Republican Sen. Marco Rubio said in a statement backing the bill. “It is critical to our national security and the security of our allies in Europe that the United States remain engaged and play an active role in NATO.”

If Trump attempted to leave NATO without Senate approval, the bill would prohibit any funding from being used to do so and would authorize congressional legal counsel to challenge the administration in court. Trump has said previously that he believes he has the authority to pull out of the alliance if he so chooses.

The reintroduction of the bill comes after reports this week that Trump repeatedly expressed interest last year to senior advisors about quitting the alliance.

The president’s ambivalence about American military commitments in Europe and doubts about the utility of NATO isn’t new. During a NATO summit in July, Trump caused a stir when he hectored allies about their failure to invest more in defense, and threatened that the U.S. could “go our own way” if things didn’t change. That prompted U.S. lawmakers to introduce legislation at the time seeking to block any attempt to withdraw from NATO, but the matter never came to a vote and seemed to fade as a legislative priority.

Trump, during an appearance Thursday at the Pentagon, gave no indication of a looming NATO pullout. “We will be with NATO 100 percent, but as I told countries, you have to step up,” he said.

But the Senate’s renewed concerns about White House commitment to NATO, which was founded in the aftermath of World War II as a collective bulwark against Soviet expansion, comes after a series of abrupt foreign policy changes. These include Trump’s call to pull forces out of Syria and downsize the military mission in Afghanistan.

Kaine, member of the Senate Foreign Relations and Armed Services Committees, said such sudden policy changes “and his (Trump’s) deference to Vladimir Putin — is destroying strategic partnerships we have forged with allies across the world.”

There is significant popular support for NATO in the United States, where 62 percent of Americans have a favorable view of the alliance, up from 53 percent in 2016, according to a 2017 Pew Research Center poll. Still, there has been debate over the years about whether the U.S. military was over-committed in Europe amid questions over NATO’s relevance after the end of the Cold War.

During the Obama administration, numerous Republican and Democratic lawmakers expressed interest in reducing troop numbers in Europe as a way to save money and give a boost to American garrison towns. Such debates in Washington largely ended after Russia’s military intervention in Ukraine in 2014 along with concerns about Moscow’s meddling in U.S. and European elections.