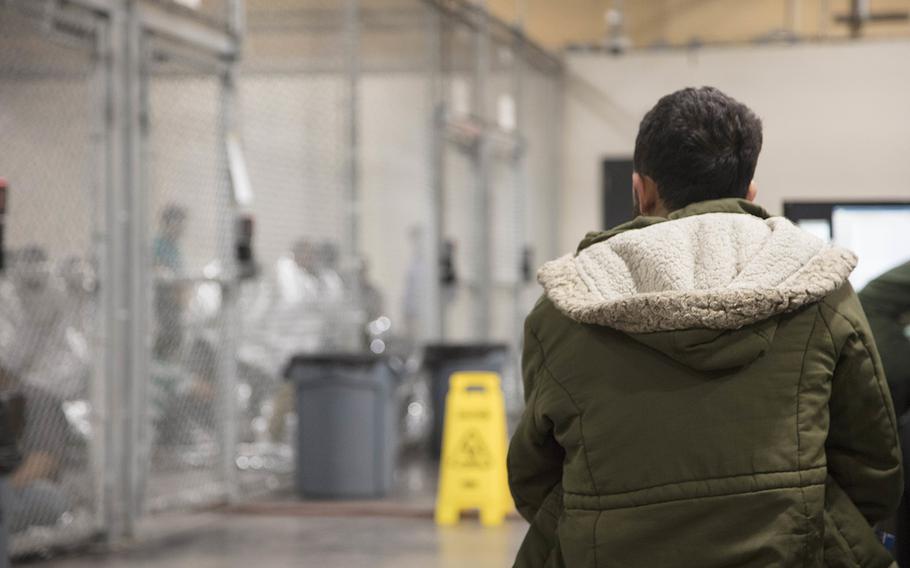 The letter came just hours after the Pentagon confirmed that it had approved sending 21 active-duty and reserve judge advocates to help the Justice Department with its growing backlog of cases created after the government adopted a policy to prosecute adults who cross the border illegally. The attorneys will stay in place for less than six months each, the Pentagon said.

“Clearly, the military needs more, not fewer, lawyers available for it critical military justice practice,” the senators wrote. Gillibrand and Ernst are senior members of Armed Services subcommittees, and Leahy is vice chairman of the appropriations committee. “Instead, we have now learned the services will be diverting these valuable resources to support a nonmilitary mission. Pulling 21 trial counsel from military courtrooms to prosecute immigration cases is an inappropriate misapplication of military personnel. We urge you to maintain these resources within the military justice system.”

Their efforts could be too late.

The move has been in the works for several weeks, and several military attorneys are in place, the Office of the U.S. Attorney for the Southern District of California told Stars and Stripes.

The senators’ letter reflected the mixed responses of many military lawyers and experts who appeared to be taken by surprise. Many agreed with the senators in questioning a decision to pull resources from a military justice system stretched thin trying to address a growing number of sexual assault cases. They also questioned the efficacy of having these attorneys working in an area of law they knew nothing about for just a short time.

Eugene Fidell, a lawyer specializing in military law who is a visiting lecturer at Yale Law School and president emeritus of the National Institute of Military Justice, said he was sure the Department of Defense general counsel had “scrubbed” the action to determine whether it was among the domestic purposes that the military can be used for by the government.

The Pentagon did not immediately reply to a question about the issue.

Even if the move is legal, Fidell said that the government was inserting military lawyers into the fraught issue of immigration. He noted that there has been a groundswell of objection at a national level to the government separating parents from children and prosecuting every case, even if families were seeking asylum. An executive order signed Wednesday by President Donald Trump ended the separation of families, and as of Thursday, parents crossing illegally with children are not being prosecuted.

“The country is on a war footing on this issue,” Fidell said, including the national bar association. “You’d be taking a chance something already volatile will be even more volatile.”

Brian Bouffard, a criminal defense attorney in Dallas who has worked many military cases, said judge advocates could face a question of conscience.

“I’d like to think I would refuse the order. It isn’t something decent people ought to be a part of,” he said. “We’re better than this.”

“It serves no military purpose,” said the attorney, speaking on condition his name not be used because he was not authorized to discuss this issue. He said the military has a program of sharing attorneys with local U.S. Attorney offices. But those are for prosecuting cases in which a civilian committed a crime — usually traffic- or trespassing-related — on a military base but the case was being tried in a U.S. district court.

“I would be stunned if there are (Department of Defense) line officers who would offer up their attorneys for this,” he said.

Not all experts believe that the move is problematic.

Eric Carpenter, a professor of criminal law and military justice at Florida International University, said it made sense for the government to turn to the military when it needed a fast fill-in.

By using the military, the Department of Justice doesn’t have to worry about the process of getting lawyers ready to put in front of the federal bar, and can release the fill-ins when they are no longer needed, he said.

“It’s reasonably efficient. If I were trying to figure out how to get more people down there to try cases, one of my suggestions would be to get some military folks down there, deputize them and then DOJ is not stuck with them later,” he said. “It’s just kind of plug and play. How do we get a bunch of people at the problem as quickly as we can?”

On a historical note, while Fidell and others worried that the move could set a precedent, military historian Richard Kohn, professor emeritus at University of North Carolina at Chapel Hill and former chief historian of the Air Force, said there is nothing new or unusual in this action.

The military is the largest part of the government that is organized and staffed for surge, Kohn said. And it has been called upon by the government to respond to floods, disasters, riots and other events over the past 150 years. The only thing new now is the involvement of the judge advocates.

“It’s not at all unusual … to use the Armed Forces for what are not exactly warfighting functions,” he said.

“The military has many different kinds of missions in supporting the government and administration,” he said. “You could say this is in support of law enforcement.”

Stars and Stripes reporter Rose L. Thayer is based in Austin, Texas.