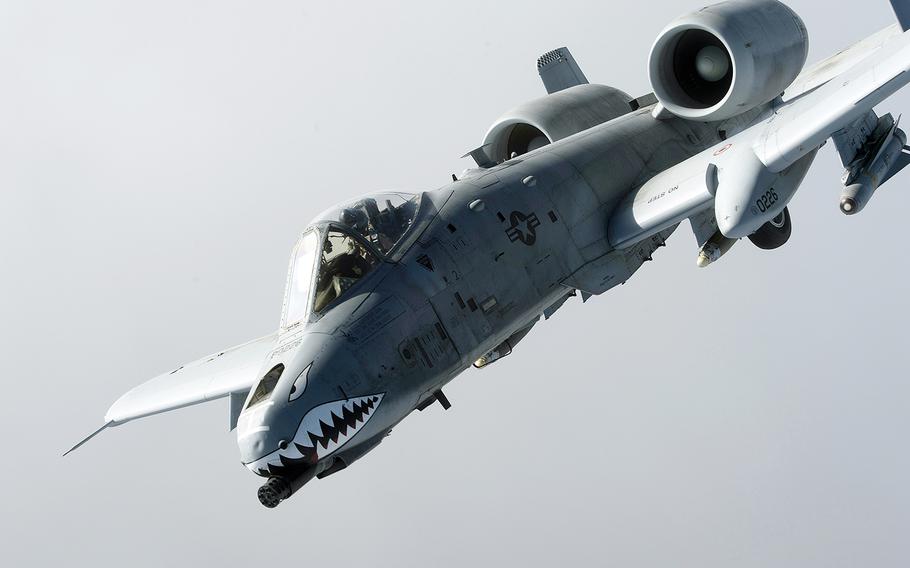 A group of eight Republican senators are pressing new Defense Secretary Ashton Carter to stop the Air Force from shifting 18 A-10 attack aircraft into backup status until he and Congress can "fully scrutinize" the service's plan. (Jason Robertson/U.S. Air Force)

WASHINGTON — Senators are trying to block the Air Force from moving 18 A-10 Thunderbolts into its backup fleet, saying it amounts to a “backdoor divestment” as lawmakers continue to debate the future of the aircraft.

The group of eight lawmakers led by Sen. Kelly Ayotte, R-N.H., say the move will unnecessary siphon off A-10 personnel and reduce the military’s ability to provide effective close air support to infantry troops.

The sidelining of up to 36 of the aircraft, also known as the Warthog, was approved by Congress in last year’s defense budget. But A-10 supporters on Capitol Hill have not given up a legislative battle that is set to continue through this year’s budget process over an Air Force proposal to retire the A-10, which the service says will save money and make way for the F-35 Joint Strike Fighter.

“Despite the growing need for the [close air support] capabilities that the A-10 provides, as evidenced by the deployment of A-10s to fight ISIS and deter additional aggression in Europe, the Air Force continues to attempt to pursue a ‘back-door’ divestment of the A-10 using a [backup aircraft inventory] plan,” Ayotte and her fellow senators wrote in a Feb. 25 letter.

About 300 Air Force personnel and 12 A-10s from Davis-Monthan Air Force Base in Arizona arrived last month at Spangdahlem Air Base in Germany as tensions with Russia over Ukraine rose.

On Friday, Air Force Secretary Deborah James said about 30 percent of close-air-support sorties have been flown by the A-10 during wars in Iraq and Afghanistan. It accounted for about 11 percent of total sorties against the Islamic State in Iraq and Syria even though it entered battle several months after the conflict began last August, according to the secretary.

The authorization passed last year by Congress — despite strong resistance — allows the service to move maintenance personnel out of A-10 units and reduce flight hours as it seeks to redistribute funding across a shrinking force. The Air Force and the other military services face a budget cap this year is putting even more pressure on spending.

The senators acknowledged that the plans would free up valuable airmen but said the Air Force should find “other ways to meet maintenance personnel requirements that do not involve gutting the readiness of our nation’s best close air support aircraft.”

The Air Force said Friday that it is holding off on moving the remaining 18 Warthogs into its backup fleet, called BAI, despite the defense budget authorization.

“While we are authorized by Congress to put 36 aircraft into BAI status, doing that now would require taking down an entire squadron. Out of respect for the intent of Congress, we’re placing 18 aircraft in BAI status,” James said in a released statement.

“This action represents the difficult choices required to balance between maintaining the capacity to meet current operational requirements and the resource investment required to keep our modernization efforts on schedule,” Welsh said in a written statement.